"Truth or Consequences!" blared the announcer's voice as the early television game shows crept into our consciousness. The main mind game of the "experts" this year seems to merit the title "Truth and Consequences." The sport is football and the discussion is pain, the reporting of it and its consequences, as key injuries have rocked one key player after another. 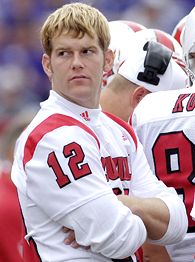 Among the most publicized are quarterbacks Brian Brohm of Louisville and Chris Simms of the Tampa Bay Bucs. Brohm is returning from a thumb injury this week, and Simms is still recovering from a dangerous ruptured spleen. They are both from football families with reputations for physical and mental toughness. Thinking people wonder at the obsession with risking so much for one's team.

Non-thinkers, mostly those who have never played, wonder why all those football wimps don't just get out there and get after it, broken bones and all.

Maybe our obsession with games had its origins in the attempt of evolving societies to substitute something benign for the rape, pillage and death occasioned by constant war (the substitute thing isn't working). No less an authority than Bill Badgett -- who was simultaneously my high school football coach, the most terrifying presence on the face of the earth and our eighth-grade health teacher -- taught us about "Kicking the Dane's Head." "Kicking the Dane's Head" was, according to our Health 101 text, the first of the "foot meets ball" type of games, apparently played during medieval times.

The rules of KTDH were unclear; we believe the townspeople in one village of northern England challenged the populace of a neighboring fiefdom to meet in the middle.

Legend has it that the populace who could outkick, outmaneuver and outflank the opposition so as to get the gruesome object across the opponents' city limits became the winning team. The games could go on for days, and the rewards for the winners were probably ample beverage supplies and bragging rights. God bless the poor referees.

Think about the fatigue, the alcohol consumption, the inevitable thugs and the feeling of picking skull shards out of one's face, and you begin to understand how we Anglo-Saxons came up with the concept of "playing hurt." By golly, if local religious customs prevented the sacrifice of a virgin, then us tough guys could surrender our molars, cheekbones and the occasional eyeball. From that day until this, macho males have thrived on the ideas of playing hurt, being brave and winning the respect of hard-nosed coaches and pretty girls.

Ninety-five percent of all football coaches I have known honestly love their players and want what is best for them. Soft young men do become tough and able to transcend the pain that is part of football. It is the 5 percent of narcissistic coaches who get crazy that cause very real concerns. "Young men, are you tough enough?" they ask. "Yessir!" we shout. "Well then, let's get busy and find out who is tough enough and who is not!"

The danger comes with the toughest kids, the ones who will not tell anyone when they are in trouble. The key to playing football the right way is for the trainers and doctors to be present for every drill, and for them to have total authority over the coaches.

Meanwhile, the ingrained culture of toughness pervades every waking moment for the committed football player.

Lesson one: You must be physically and mentally tough to play this sport. That includes playing through the "small hurts."

All of us driven competitors who played football for too long love telling our stories of playing hurt. Coach Badgett began every season by telling us how he played as a defensive tackle for the University of Georgia with a broken leg. He said, "My leg was so badly broken I couldn't even get in my stance. That did not matter. I played. No matter what!" (Coincidentally, it turns out that he played against my future pro coach. The mighty Fordham Seven Blocks of Granite were tied in the Polo Grounds in the late '30s by an upstart Georgia team. The score was 0-0, and Badgett and his boys had battled against a smallish Fordham guard named Vince Lombardi. There is no record of whether Badgett assumed a three-point stance.) I should also note here that he never allowed one of us to play with even the smallest fracture.

Lesson two: The exaggerations of beat-up old football players, even the most honest ones, are staggering.

My sophomore year in high school, I reported to summer camp with welts all over my right shoulder from stings I had received when I brushed a hornet nest with the bill of my baseball cap. The angry insects had gotten inside my T-shirt. I was thrilled. I was going to get out of at least a week of two-a-days! Badgett, who was issuing equipment, glanced at my shoulder, handed me my pads and said, "Get dressed for practice, Bill. Full pads." He never changed his expression, and I missed no practices.

Lesson three: The definition of small hurts may differ from coach to player.

As a junior at Georgia Tech, I broke my right hand. It was injected with Novocain and I played linebacker until the cast could be removed. I then proceeded back to center, deadened hand and all, to Knoxville, Tenn. There I set the Neyland Stadium record for the long snap. The ball sailed 35 yards, over punter Billy Lothridge's head, and into our end zone. My young wife, Carolyn, who was in attendance, burst into tears. She never watched another punt snap in her life.

Lesson four: It is not enough to play hurt. One must play well while playing hurt.

When I arrived in Green Bay to work for Lombardi, I quickly learned what the culture demanded. The second week I had a slight hamstring pull and went to the trainer for therapy. As I lay on the training room table, superstar Paul Hornung walked over. He was one of the few veterans that was nice to rookies. He asked, "Whatcha got, kid?" I replied that my hamstring was pulled. He glanced around, leaned over in a conspiratorial manner, and said softly, "The old man doesn't believe in hamstrings."

I stood, walked out of the training room and never returned while in Green Bay. Never.

Lesson five: The local culture is established by the coach, and one does well -- especially in the National Football League -- to quickly learn how the training room is regarded.

The truth is that we have brainwashed some of our toughest kids into thinking it is heroic to keep going on the gridiron, even when the pain is overwhelming. The truth is that coaches, trainers, doctors, reporters and parents have a more significant obligation than in years past. The truth is that we must constantly improve our methods of monitoring and of teaching players the difference between pain and injury. If we fail in that sacred responsibility, the obvious consequences are simply unacceptable.