The phrase "perfect storm" refers to the simultaneous occurrence of events that taken individually would be far less powerful than the result of their chance combination. Such occurrences are rare by their very nature, so that even a slight change in any one event contributing to the perfect storm would lessen its overall impact.

The melee that erupted in the third quarter of the Florida International-Miami game Saturday was a perfect storm. A complex matrix of factors was involved and is being trumpeted across the sports and educational landscape: The campuses of the two teams are nine miles apart, the Miami team is in a frustrating period, UM coach Larry Coker is under fire, the Canes' reputation for thuggery seems to be returning, and the weaker opponent started the fight. The debacle is the subject of much evaluation and moralizing. It has evoked heartfelt apologies from FIU and Miami coaches and officials, and disciplinary action from each school and conference. 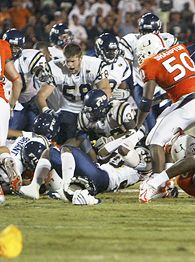 Our kids play video games that make the FIU-Miami brawl look like a Sunday school picnic. We pack huge arenas to watch grotesque actors impersonate competitive athletes while bashing each other with metal folding chairs and throwing referees out of the rings. We allow our children to listen to song lyrics that call into question the most basic attributes of human decency. We pay millions of dollars to radio talk hawks, who pound away at the fabric of reason and diplomacy. Football fans believe it is their absolute right to scream obscenities into the faces of coaches, coaches' families, players and players' families. At one parent weekend my wife Carolyn attended at the University of Virginia, one of the quarterbacks' mothers asked as they stood on the sidelines, "Do you think these people will boo the quarterback's mom?"

No one is pressing for the solution to this growing menace. No one is putting it into context. "The coach must take responsibility," pontificates the former coach. "Fire the coach!" scream the boosters (who, by the way, always scream, "Fire the coach!"). "I wish the coach would teach my son how to behave," exclaim the parents. The paltry one-game suspension by conference officials would be a bad joke, but is made even worse by certain Miami boosters, who are suggesting that all this is a badge of honor, and "returns Miami to its rightful place in football." "Just what our program needs right now," they crow in their delirium.

The quasi-disciplinary response reminds me of an old story of a community in the North Georgia Blue Ridge Mountains. The twists and turns in the two-lane roads around the secluded village were so severe that cars periodically slid off the pavement and rolled down the mountainside with disastrous consequences. The astute town government met, and over a few mason jars of a locally produced beverage, made a landmark decision. "We gonna do something about this problem with our roads," stated the mayor. "We gonna build a hospital at the bottom of the hill where most of them cars end up."

Leadership and Prevention
It has been a while since I was in the middle of one of these fights, but once one has been there, one never forgets the fear and adrenaline rush. When you watch the films, it is hard to convince yourself that you actually did the things you did. You watch normally staid, reserved men, including yourself, going absolutely berserk, and you begin to question the whole premise of violent sports.

Then you evaluate, take a hard look at yourself, and realize the truth. This kind of behavior lurks just beneath the surface of competitive athletes -- all the time.

Strong coaches and mature team leaders must come together, discuss their behavior, decide what must be done with the team, get it done, and go on about the business of playing hard and fair. The pitiful penalties will accomplish nothing. If they worked, the Clemson-South Carolina fiasco of 2004 would have been our last such incident.

The Two Pains
Here is what must be done to prevent a continued slide into the ugly underside of human nature, and into the backward thinking of the foolish little metaphor above. Based on the tapes, fight participants can be placed rather easily into four categories:

1. Spontaneous: Players who instinctively responded to the first shot, who defended themselves, and then stayed above the fray. They should be commended.

2. Peacemakers: The ones who spent the entire time trying hard to break it up. They should be made captains.

3. The Serious Fighters: The ones who started, continued and took the fight to its conclusion. They should be suspended several games, the number of which should correlate to the damage they caused.

4. The Lethal Few: The ones who ran into the fray looking for someone to maim, the ones who hit people in the back of the head, stomped faces, necks, groins and any other unprotected part of defenseless opponents. They should be out for at least one year, perhaps for life, depending on whether they were successful in ending another career, which was their obvious intent. Lest you feel sorry for this group, don't. They are the sociopaths who do not wish to do anything by any rules. To them, there are no innocents, no one exempt from their wrath. If women and children are present, one gets the sense they would just at soon hit them as well. Trust me, this group understands one thing: utter banishment, including the loss of NFL opportunities. Put just one of these guys out of commission, and you probably prevent other similar scenarios in the future.

There are two pains in life, the pain of discipline and the pain of regret. You choose. I choose. At times like this, the entire leadership cadre of organized sport chooses. We are at a crucial juncture. How we choose here will make all the difference in the potential perfect storms to come.