Nebraska folks have been looking forward to Saturday night's meeting with Penn State all summer. Who could blame them after the way the Nittany Lions blistered the Big Red 40-7 in a primetime national TV game? And from the looks of things this is a totally different Husker team JoePa's boys will be facing.

The biggest change is with new D-coordinator Bo Pelini's defense. Pelini, a Pete Carroll disciple, has unleashed a fast set of linebackers and that could spell disaster for a Penn State offensive line that uses five new guys, and quite frankly, looked lost last Saturday against Boston College.

We talked a little about OLB Demorrio Williams last week and sure enough, he went wild against Utah State, notching three sacks and forcing two fumbles in the first half. The move of the 6-foot, 215-pound Williams to DE in obvious passing situations has been a stroke of genius, but don't overlook MLB Barrett Ruud, who also has been freed up a lot this year.

The 6-2, 235-pound junior made a team-high 11 tackles while also forcing a fumble and breaking up two passes against USU. Ruud runs well, but he was bothered for most of last season having to play with a cast on his broken left hand. Pelini now is using Ruud further behind the line, giving him a better look at the offensive backfield and more freedom to run and play downhill.

This game will be even more compelling if JoePa relies more on talented freshman RB Austin Scott, who is -- by far -- his best runner.

Getting Digits
As usual for a big game at the Orange Bowl, the Miami sideline looked like Hurricane Hall of Fame gathering. In addition to Bernie Kosar, Warren Sapp and dozens of others, one of the most vocal old 'Canes on the sidelines for Saturday night's manic comeback win over Florida was Melvin Bratton. A former superstar UM running back, Bratton was Willis McGahee some 15 years ago. He tore two knee ligaments while catching a pass in the 1988 Orange Bowl in which Miami beat Oklahoma for the national title. It was Bratton's last play for Miami.

Before the Orange Bowl, Bratton was a projected top-five pick. He was taken by the Dolphins in the sixth round of the '88 draft but opted not to sign. He went back into the draft and was taken by Denver in the seventh round the next year. Two years after starting for the Broncos in the 1990 Super Bowl, his career was over. Bratton ended up as a scout for a few NFL teams before his godson sparked an idea a short while back.

Turns out on Signing Day in February 2002, Bratton's best friend and former UM roommate Tolbert Bain was getting all styled up to take some pictures with his son, Travarous, a speedy cornerback, who committed to UM. Bain's old man, a former 'Cane cornerback, brought out his old Miami jersey. The younger Bain flipped. "Dad, that's worth about $250." When Bain shared the story with Bratton, the former tailback dropped his newspaper and a light bulb went off. College Throwback, an apparel business paying homage to old-school football heroes, was born.

Fast forward 18 months and thanks to the players' ties, they have signed up 29 former college football legends. Among them, FSU's Deion Sanders and his No. 2; Tennessee's Reggie White and his No. 92 and UM's Bernie Kosar and his No. 20. The players get a percentage of the jersey sales and an additional percentage goes to the school's athletic department in the player's name.

As the old 'Canes told their story about how fate found them, Bain looked outside at a yacht that cruised past the window of Fort Lauderdale's Marriott Marina. "Man, I'd like to have one of those someday," he said.

Bratton just laughed. "I thought I was gonna have one of those," he said smiling. "But I guess I wasn't ready. Maybe God thought I'd blow all the money back then."

Seeing Bratton and Bain (who is no longer allowed on the UM sidelines since he has a son playing), it got us to thinking which players this year have the potential to someday merit folk hero status. (And no, this isn't a best players list or anything like that, just guys we think have that mysterious Q-rating.) 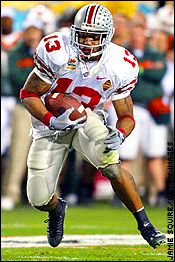 1. Maurice Clarett, No. 13: Even if he never plays another down of college football, he will go down as an icon of sorts. Good or bad. That Grambling No. 13 that Doug Williams was showing off probably should be No. 1B.

2. Kellen Winslow, No. 81: The Vin Diesel look-alike may rub some folks the wrong way, but you can't deny he has 'it.' Who else gets on SportsCenter for making a one-handed catch on the sidelines while his unit wasn't even on the field like he did against Louisiana Tech.

3. Greg Jones, No. 6: Hercules in cleats. His annihilation of UNC safety Dexter Reid is the football equivalent to Vince Carter's facial on Frederick Weis. Maybe the best football highlight we've seen in years.

4. Larry Fitzgerald, No. 1: Has the work ethic, personality and talent to live up to his number. He's already make people in the Steel City forget Antonio Bryant.

5. David Pollack, No. 47: The SEC's top defender in 2002, he looks ready to make a run at another league player of the year trophy.

6. Jared Lorenzen, No. 22: As much cult hero as folk hero. He's big. He's talented. His beefy face looks like a loaf of fresh-baked bread inside that helmet.

7. Brad Smith, No. 16: He has a little of the Michael Vick factor. A few more performances like the one he turned in against Oklahoma last year and he'll become a household name.

8. Richie Incognito, No. 51: The name helps, but the ornery OT also must be making Dick Butkus proud that he wears 51.

9. Igor Olshansky, No. 53: OK, we had to pick one Duck because of those neon unis, and who better than bull-rushing Ukrainian who benches 515 pounds and loves to relax by throwing knives?

10. Jeremy Bloom, No. 15: Besides the fact that he might be the nation's slickest punt returner and that he'll probably will win an Olympic Gold medal some day, we found more than a dozen web sites devoted to the Colorado sophomore.

Speaking of cult heroes, you could probably add Columbia's No. 12. That's the jersey worn by reserve QB Matt Kaplan, who has made some news off the field since he is dating Ashley Olsen, one of the Olsen twins. Kaplan met her at tiny Campbell Hall High School in North Hollywood. "Matt was my prize recruit in 2002," says former Lion assistant Brian Yauger, who is coaching the Arvida Jets in Sweden this fall. Yauger was able to convince Kaplan to go to the Ivies over a ride to San Jose State. "It was funny, when I was recruiting him I noticed that the tailback was pretty good, and I asked about him. They said his name was something Washington." The kid was Denzel Washington's son.