Last year Myron Rolle popped up unexpectedly at Oklahoma's summer camp. Nobody from the Sooners staff knew anything about the New Jersey kid other than that he certainly passed the eyeball test.

But after a couple of practices, then-Sooner assistant Mike Stoops pulled Rolle out of his group and threw him in with some touted senior prospects so the OU staff could get a better gauge on just what had showed up on their doorstep. Sure enough, the rangy young DB blanketed the receivers at that level too. 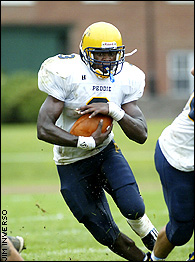 He was mature, quick and had a frame bigger than any of the OU DBs. Rolle dazzled the Sooners staff so much that after the camp Bob Stoops sat down with the kid and his parents and offered the New Jersey product a scholarship.

Pretty heady stuff considering Rolle was about to begin his sophomore year.

He followed up that visit with a trip to Purdue where a similar scenario played out with Rolle leaving the campus with another scholarship offer.

This summer, the 6-foot-3, 210-pound DB showed up in Miami, clocked a camp-best 7.03 in the three-cone drill, locked up the best WR, Jessie Hester Jr., and took home overall camp MVP honors.

"My goal was to go down there and dominate and I think I did that," said Rolle, who by the way, also is a straight-A student, class president, editor of the school newspaper's sports section and even played the lead in his school's production of Fiddler on the Roof.

"This kid is off the charts," says one college recruiter. "He's got a great frame and can really close, but the thing you really love is his maturity. He is a great kid and all you hear about him is positives. This guy will do whatever he can to fulfill his potential."

No kidding. After returning from Miami, he's been spending hours on his own working on the footwork drills he picked up from Miami DB coach Tim Walton and Antrel Rolle (no relation), the team's All-American cornerback. This spring Rolle has even been driving two hours to North Jersey to work with a speed coach twice a week. Rolle, who will play this fall at The Hun School in Princeton, N.J., already lists 15 offers. Oklahoma, Purdue, Virginia, Iowa, Stanford, Wisconsin and Miami are included in that group.

After returning from the Miami camp, he will camp at Michigan, then visit Notre Dame, Wisconsin, Minnesota and Iowa. Rolle also is heading to Tulane for the National Youth Leadership Forum on Medicine this July.

Rolle says he'd like to play safety in college, but feels he could handle the corner too.

"Most schools are recruiting me as a safety and they think I could be 225 or 230 by the time I get to college, but Notre Dame likes me at corner," he says. "They think I can be a Bobby Taylor type."

As for any tips on which school he's leaning to, don't expect a quick decision. He loves OU, but is interested in checking out all his options.

Often lost in the buzz of Signing Day, are dozens of players who commit to 1-A schools from off the radar. Many show up as "invited" walk-ons and some, such as Wisconsin's walk-on-turned-All-American DB Jim Leonhard make huge contributions to their team and end up on scholarship.

No program has had better success in the last decade utilizing walk-ons than Wisconsin. Joe Panos, Donnell Thompson and Jason Doering all blossomed into standout players for Barry Alvarez.

After making some calls and doing some digging, here's a list of preferred walk-ons we think not only will win scholarships eventually but could emerge as starters down the road.

Given their history, it makes sense to start with the Badgers. The two best bets are FB Bill Rentmeester, a 236-pounder who ran for 20 TDs and almost 1,500 yards last year at Wisconsin's Beaver Dam High. Rentmeester is the quintessential physical, stick-your-face-in-there fullback, who figures to be groomed as Matt Bernstein's replacement.

At 5-10, Joshua Neal's height might've scared off some 1-A schools, but the 225-pound LB from Nashville, Tenn. reminds Badger coaches of Donnell Thompson in toughness and character. The son of former Badger Marvin Neal, a one-time Green Bay Packer, Joshua had 53 career sacks and 15 forced fumbles playing at a very competitive level in Tennessee.

One other future Badger to watch out for is Jeff Treslley, a 6-4, 185-pounder who bypassed an offer from Stanford to run track (he is a standout hurdler) to play free safety for his home-state school.

Oregon State: LB/WR Slade Norris. Could've gone to small-school power Portland State, but says he has assurances he will get a Beaver scholarship deal in the future. Don't bet against it, he ran a 4.53 at a Nike combine in Seattle last year (the third-fastest time at the camp) and stands 6-3, 215.

Penn State: OG/DT Ross Muir. Impressed PSU coaches at their camp last summer. The 6-4, 275-pounder played on a team that struggled and has bulked up 20 lbs. since his season ended.

Virginia: FB/S Josh Zidenberg. A small-school star who ran for over 2,000 yards and 39 TDs last season, he had some 1-AA offers, but was thinking of going to Fork Union till UVa coaches said they'd give him a shot at fullback. The 210-pounder will probably redshirt and try to bulk up to 225.

Virginia Tech: LB D.J. Preston. A 6-2, 220-pounder whose older brother Jerome Preston and cousin Jesse Penn were both solid players for the Hokies.

Stanford has another prized O-linemen coming to The Farm. Jeff Zuttah, a top Michigan recruit from the Class of 2003, who is sickle-cell dormant and was never medically cleared by the Wolverines, has been green-lighted by the doctors at Stanford and figures to help an unproven Cardinal line. Some scouts considered the rock-solid 6-4, 295-pounder the top linemen in the northeast in 2003.