It wasn't exactly a Joe Namath prediction, but Kay-Jay Harris knew he was poised to do something huge. As he was getting his ankles taped, the loquacious West Virginia tailback turned to one of the Mountaineer wideouts and said "I'm about to break a record today."

Pretty heady stuff considering the 235-pound senior had never had a 100-yard game for WVU or considering that he wasn't even going to start the game against East Carolina. Still, Harris, a former junior college standout and one-time Texas Rangers farmhand, has a sense for these types of things. 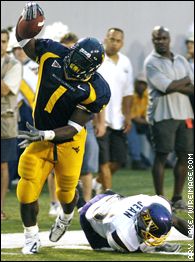 Sure enough, Harris not only entered the game on the third play but also blasted his way to 223 rushing yards by halftime, a new Mountaineer one-half record. His 168-yard effort in the second quarter broke the 133-yard mark set by Garrett Ford Sr. against Pittsburgh in 1965. By the time Harris was pulled from the game with 11-minutes left in the game, he had run for a Big East Conference record 337 yards (breaking Edgerrin James' mark), and scored four touchdowns in a 56-23 WVU rout.

It's been a long, curious road to overnight stardom for the 26-year-old Harris. In high school, he won four state long jump titles. In the minors, he batted leadoff and once ranked second in the Appalachian League in stolen bases.

Dejected by his slow progress up the Rangers' chain, Harris would flip on the TV and watch former high school buddies (Seattle Seahawks WR) Darrell Jackson and (Buccaneers QB) Shaun King playing in the NFL.

"That should be me," Harris would think. "I know I can play with them."

After a two-year stint at Garden City (Kan.) CC, Harris toyed with the idea of jumping into the NFL draft before signing on with West Virginia. In his first year at WVU, the biggest buzz the RB drew was for something that happened off the field. Harris saved a drowning man when he was back in Florida on spring break.

Despite predictions about a potential 1,000-yard season, Harris spent the 2003 season as Quincy Wilson's understudy. Few around Morgantown have doubted his tools, but he still hadn't stepped up. That is, until last Saturday, when he jumped into the Heisman race, and showed he might be there to stay, especially since the Mountaineers figure to be a dark-horse player in the national title picture.

"That was the Kay-Jay we've been waiting on," said West Virginia offensive coordinator Calvin Magee, the man who recruited Harris. "That's the Kay-Jay we knew was there. That's what he can do."

Harris, a bruiser with legit 4.4 speed, says he's just getting started. "I had to have a break out game like that so people won't forget about me," he said through laughter Monday night, adding that he's enjoying the spotlight he's drawn from the big game.

Better still, the Tampa-native's next game is virtually a home game as the Mountaineers visit Orlando to play Central Florida.

"I'm so excited about it, I'll probably have 200 people there, but I know I gotta stay focused. Some people are already talking about the Heisman, and that's cool, but I can't get ahead of myself."

Harris knows that if he comes close to duplicating his performance against ECU, his school won't need to do any hyping for his Heisman candidacy, it will take off on its' own anyhow.