Santonio Holmes is a star. Not will be. Not could be. Nope, is. As in, the guy is a genuine difference maker and there aren't many of them in college football.

We must admit, we outsmarted ourselves when we left the Ohio State wideout off the preseason Hot 100 list. The thinking (or over-thinking in this case): Without Mike Jenkins around, defenses will focus all their efforts on locking up the 5-foot-11, 185-pounder. Well, if you watched the Buckeyes game against Marshall (10 catches for 218 yards, 2 TDs), you found out what many OSU people already knew, that containing Santonio Holmes just isn't that easy. 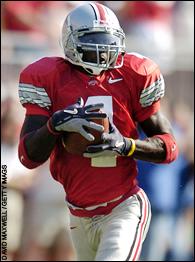 Smooth is the perfect way to describe Holmes. He gets in and out of his cuts well, has wonderful body control and he has that one special quality all the great receivers have to have -- ball skills. He knows how to maneuver in traffic and make plays.

The Buckeyes are fortunate to have him. A Belle Glade, Fla., native, Holmes was interested in Miami, but the 'Canes seemed to be more smitten back then with Sinorice Moss and Darnell Jenkins so the Buckeyes got their man. While Moss had a huge game against FSU and Jenkins looks like he's ready to break through, Holmes is pushing Taylor Stubblefield (Purdue) and Michigan's Jason Avant and Braylon Edwards for the title of Best WR in the Big Ten.

"He's special," says OSU coach Jim Tressel. "He's not similar to Michael Jenkins, although he make plays like him. Some of the old timers here might compare him to Terry Glenn or Paul Warfield." Heady stuff right there.

Holmes is just one of a host of guys who has already emerged to fill a huge void and it's guys like him, the "step-up" guys, who enable great programs to reload not rebuild. Here are five other step-up guys who have caught our attention this season:

Biscuit Hagans, Virginia, QB: Yeah, Matt Schaub was smart and about as accurate as they come, but this one-time punt return man has been every bit as impressive in his own way running the UVa offense. Against UNC, Hagans went 10-for-12 for 209 yards and ran for another 30 on the ground. Even though he's built more like a TB than a QB at 5-10, 210, you can't knock his passing thus far -- 27-of-34 for 420 yards, numbers good enough to rank him third in the nation in passing efficiency with a rating of 192.8. He's also rushed eight times for 55 yards and a score and has yet to be sacked this season.

J.J. Arrington, Cal, RB: We remember asking Bear QB Aaron Rodgers this summer while on a golf course about how tough it would be to replace power back Adimchinobe Echemandu. Rodgers just laughed and said "Wait 'til you see J.J. Arrington. We'll be just fine." Boy, he wasn't kidding. On Saturday against NM State, Arrington went for 177 yards, giving him 358 in his first two games. Better still, he's got a ridiculous 11.2-yard per carry average.

Mike Goolsby, Notre Dame, LB: After arriving in South Bend with a ton of hype, Goolsby is finally shining. He, along with Brandon Hoyte, give the Irish an active 1-2 linebacker punch that is right there in the mold of Iowa's stellar tandem of Chad Greenway and Abdul Hodge. Against Michigan, Goolsby made 14 tackles, helping the Irish to hold Michigan to 56 rush yards on 30 carries. That makes just 78 yards rushing allowed on 65 attempts (1.2 yards per attempt) and five turnovers in ND's two games.

Tavares Gooden, Miami, LB: From special teams standout to prime-time every-down 'backer, the 6-1, 225-pound sophomore was a big reason why UM held the 'Noles and their great RB combo of Leon Washington and Lorenzo Booker to 57 yards rushing on 35 carries. Maybe more importantly, Gooden sparkled in coverage, locking up Booker one-on-one when the speedy TB split out wide late in the game. Gooden and Co. will get another test this weekend in Louisiana Tech's Ryan Moats, the nation's top rusher (514 yards in two games), a player UM coach Larry Coker dubbed Barry Sanders Jr.

Alex Ligon, Colorado, DE: Colorado's offense has been horrible (the Buffs haven't scored an offensive TD in seven quarters), but they're 2-0, thanks in large part to Ligon, who made seven tackles, including three sacks for a loss of 26 yards last weekend. Ligon forced a fumble in the second quarter with one of his sacks. He has been the big-play man the Buffs thought they'd have in the since-departed Marques Harris. 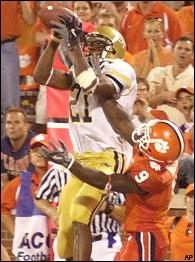