On the eve of the Heisman, we figure there might be no better time than to ask the question folks in Tallahassee have probably asked themselves a million times over the past few years: What if Joe Mauer didn't choose baseball millions and went to FSU?

Mauer, as you may recall, was the bluest of the blue-chip QBs and signed with FSU as the crown jewel of the Seminoles consensus top-ranked recruiting class of 2001. The 6-foot-4, 220-pounder who hailed from the same high school in St. Paul, Minn., as FSU's departed Heisman Trophy winner Chris Weinke, threw for 5,528 yards and 73 touchdowns in his final two years of high school.

Scouts said he had it all -- the arm, the presence, the leadership skills, the agility -- to be a franchise QB. Mauer, though, signed with the Minnesota Twins and is now a big leaguer catcher. But what if he didn't? Well, Noles fans can only dream. Maybe standout wide receiver P.K. Sam wouldn't have left for the NFL early because of frustrations with the shaky FSU passing game. Chris Rix, FSU's enigmatic quarterback, probably gets moved to free safety. And who knows how many national titles FSU might have played for. But that's how it goes in the world of recruiting.

It all looked so promising four years ago when the recruiting analysts were falling all over themselves about these classes. Recruiting really is the biggest crap shoot in sports. Sometimes, even the shrewdest recruiter can whiff miserably. Sometimes you can get lucky, and sometimes you can be right and still come up empty. But now we've reached a safe distance. Time to sort things out and examine the consensus top 10 of 2001 and a few other noteworthy classes that came in below the radar. 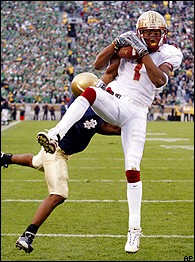 The Bottom Line: Start with the attrition. Losing Mauer to baseball wasn't a huge shock. Neither was losing RB Eric Shelton to Louisville, especially when you've stockpiled so much other talent (Greg Jones was in front of him, among others). The other big casualty was QB Adrian McPherson.

Overall, many good players: Thorpe, Carter; OL Matt Meinrod, DB Kyler Hall, WR Willie Reid, Sam and Davis. With 10 tackles for loss, Davis has emerged as a solid DE. But Thorpe was the closest thing to a star, and he got derailed by injury. Worse still, in a very un-Seminole-like twist, none of the five LB prospects (Davis, Marcello Church, Willie Jones, Ray Piquion or B.J. Dean) blossomed into a standout, and kicker Xavier Beitia's career was more downs than ups.

The Final Grade: B-

The Bottom Line: All of the marquee men lived up to their hype, and they were the nucleus of the 2003 national title team. Wilkerson (along with classmates Andrew Whitworth and Rudy Niswanger) were the backbone of stellar O-line, while unheralded Travis Daniels emerged as a quality corner and Joseph Addai proved to be a nice change-of-pace back. QB Rick Clausen ended up starting in an SEC title game, although it was as a Tennessee Vol.

The Bottom Line: Sleeper Braylon Edwards emerged as the best of a quality bunch, even outshining Jackson and Shazor, a pair of all-American caliber DBs. Adam Stenavich and Matt Lentz were part of a stout Wolverine O-line, while LBs Lawrence Reid and Scott McClintock proved to be leaders for the UM defense. Woods and Massey have been solid if not spectacular. Massaquoi developed into a quality tight end. The big miss was on Baraka, who had been charged with marijuana possession before suiting up for the Wolverines, then was dismissed from the team the following spring.

The Bottom Line: Benson will go down as one of the most prolific runners in college history. Johnson won virtually every defensive award possible. SS Michael Huff is a budding star and LT Jonathan Scott and CB Ced Griffin each are all-league type talents. (Cosby never made it to Austin, opting for pro baseball and is still in the minors.) Depth was a little lacking in this group, but otherwise, it's a very impressive, top-heavy class with Benson and Johnson being every bit as good as their hype. Of course, they never beat Oklahoma.

The Final Grade: A-

The Bottom Line: Harris, the anchor of the imposing OU defense, was the real deal. Although missing him for a season hurts, especially since classmate Dusty Dvorcek, a real find, was booted midway through this season. Center Vince Carter has been almost as vital as Harris to the offensive front, while fellow OL Kelvin Chaisson has been a solid starter. DB Eric Bassey looks the part but has struggled when pressed into action at corner and strong-armed party-boy Rawls was a monumental flop.

The Final Grade: B

The Bottom Line: The good news is Williams was even better than advertised, putting up ridiculous numbers in his three seasons in Seattle; unfortunately, he bolted after last season. The bad news: Paus never panned out; neither did touted JUCO OL Francisco Tipoti. Frederick, a marvelous talent, was very up and down. Overall, just not enough solid players here, and the misses in this class are a big reason why the once-proud Washington program deteriorated into one of the nation's worst from a BCS conference.

Two sleepers who have pulled their weight, save this group from a D grade: Manase Hopoi, who emerged this fall as one of the nation's top D-linemen, and tough guy Joe Lobendahn, a productive linebacker.

The Bottom Line: This was the running back class, and for the most part, it was good, although certainly not great. (Tennessee was only fifth in the SEC in rushing this fall.) Houston, a fine all-around back, was almost a 1,000-yard man, barely trailing the team's top back Gerald Riggs. Davis has been a good short-yardage guy. Simon, who has battled some big injuries, has been a standout when he is on the field. Boulware, though, never was a factor and Jones transferred to Louisville. JC transfers Julian Battle and Demetrin Veal both were solid starters before moving on.

The Bottom Line: Larry Coker's first class. He "saved" it after taking over for departing Butch Davis eight days before Signing Day, and it turned out just fine. Coker promptly landed WR/PR Roscoe Parrish and RB Frank Gore, who Davis wouldn't have gotten, while also keeping Rolle and Co. to go with TE Kellen Winslow, DT Vince Wilfork and sleeper Sean Taylor. The only player who fell out of the fold was WR Chris Murray who ended up fizzling at NC State. Ward, a big-hitting DB, didn't qualify and bounced from Pittsburgh to FAU, but never made much of an impact. In all, there might be six first-round picks here: Winslow, Wilfork, Taylor, Rolle and LB Rocky McIntosh and Harris in '06. The one catch is this group might've been too good for it's own good since the key guys could've bailed out the '04 UM squad.

The Bottom Line: It was a very mixed bag. CB prospect Cory Ross emerged as a productive tailback. The Bullock twins, Josh and Daniel, turned out nicely, and LB Barrett Ruud, a hometown kid, proved to be as good as any tackler in Big Red history. OL Richie Incognito, considered by former Husker line boss Milt Tenopir potentially as talented as NU had ever seen, struggled staying out of the coaches' doghouses and ended up leaving the program two years early. Smith struggled with a host of injuries. Helming bounced from offense to defense but never made much of an impact.

The Bottom Line: Center Mike McClosky turned out to be the best of the five O-linemen the Bruins signed. Ware had his moments but never was a dominator as most expected. Little RB Tyler Ebell was a productive back before transferring out. The best players in the class were unheralded LB Spencer Havner from Nevada and gritty CB Matt Clark.

The Sleeper Classes
Georgia: QB D.J. Shockley was the one Bulldog who created the buzz, but a host of other projects panned out enabling Mark Richt to build a powerhouse in Athens. This class has some pedigree, including DL David Pollack; LB Odell Thurman; WR Fred Gibson; DB Thomas Davis and DB Greg Blue.

Ohio State: This was Jim Tressel's last-minute class. PARADE All-American RB Maurice Hall was the biggest name, but hardly the best player in this group. The big star was CB/WR Chris Gamble, but DB Dustin Fox was a long-time cornerstone on some very good defenses, while FB Brandon Schnittker, DE Simon Fraser and RB Lydell Ross all were very productive. Best of all, though, came late in Mike Nugent, who only went on to become one of the best kickers in college football history.

Auburn: This is where you find the heart and soul of the unbeaten Tigers team of 2004. Cadillac Williams was everything he was supposed to be and CB Carlos Rogers, a Thorpe finalist, has been a godsend. Linebackers Antarrious Williams and Travis Williams add speed to the SEC's top defense.

USC: Pete Carroll's first class was only 16 players deep and ended up all about quality not quantity. There are three legit all-Americans: QB Matt Leinart, DL Shaun Cody (the big name in the class) and DT Mike Patterson, the big sleeper in the class. FB David Kirtman is serviceable, but after that? Not much.

Iowa: This was the class that turned Kirk Ferentz program around. Start with JC QB Brad Banks who was a Heisman finalist. Fellow JUCO C.J. Jones, a go-to WR, also was a star on the BCS team of 2002. DE Matt Roth is an all-star pass rusher, while linebackers Abdul Hodge and Chad Greenway both were all-Big Ten types. WR Ed Hinkel, C Brian Ferentz and CB Antwon Allen also have been solid starters. Only OL Blake Larsen, the biggest name of the class, hasn't shined.

Random Notes
West Virginia will lose two of its top game-breakers after the Gator Bowl game when WR Chris Henry and CB/KW Pac-Man Jones put their names in for the NFL draft, ESPN.com has learned. The 6-5, 190-pound Henry, WVU's leading receiver with 49 catches for 811 yards and 12 TDs, will be one of the deep threats in the draft, while the ultra-aggressive Jones, the Mountaineers leading tackler and interceptor, is considered by some scouts as a solid first-day pick.