LOS ANGELES -- The yelling began at five minutes before 5 p.m. Monday. The No. 1 ranked USC Trojans weren't scheduled to start their first fall practice until 5:30, but that didn't seem to be the case judging by the reaction of linebackers coach Ken Norton as he watched from the far end of the field. 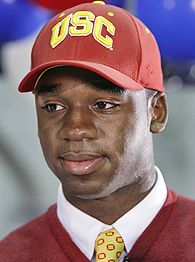 "Hit the field running!" his voice boomed from inside the walls of the practice field as two-by-two players made their way through the gate. "Nobody walks. Let's go! C'mon, somebody has to show somebody how to work."

Head coach Pete Carroll still hadn't made an appearance yet, but Norton was there to make sure the tone was set early as he watched his prized linebacker recruit Chris Galippo hustle out to join the rest of the position group assembled on the far side of the field. "We get here early," Norton hollered again. "We don't show up 'on time.' C'mon 54!"

Some of the faces have changed. Gone are star receivers Dwayne Jarrett and Steve Smith as well as All-America center Ryan Kalil, but the message was clear -- that it was back to business.

"It's wonderful to get back out there," said Carroll after wrapping up a nearly three-hour practice. "It's real exciting for us to be here and it's such a wonderful feeling having your depth chart filled out."

Actually, the Trojans' depth chart is more than filled out. It's overloaded. Carroll has more linebackers, safeties and tailbacks than he knows what to do with, but it all figures to fit nicely into the USC system.

Ever since Carroll came to Los Angeles, there have been two dominant themes at USC practices: a high-energy tempo and competition at every turn. Both were on display in abundance Monday as the Trojans, a so far consensus preseason No. 1 pick, kicked off fall camp before about 200 spectators made up of friends and family of the program and media members getting their first glimpse at the team.

"It felt great to be back out there," said middle linebacker Rey Maualuga. "It was just like a family reunion. It was a lot of fun.

The biggest buzz around the program on Day 1 focused on the Trojans' tailback situation, where the team has 10 scholarship players vying for playing time. The guy everyone was most excited about was Joe McKnight, the shifty Louisiana back who many have touted as the next Reggie Bush.

Privately, the USC coaches have been giddy about what they've heard from some of the upperclassmen regarding McKnight's performance in summer workout -- not to mention the few online clips they've seen of him blowing past some talented defenders.

On Monday, McKnight didn't disappoint as he made several eye-popping runs, juked defenders and blew past guys who thought they had angles on him. A few times he did get popped by defenders and ended up having to pick himself off the grass, but mostly he left defenders grabbing for air.

The thing I'm really excited about Joe is he's such a quick learner. He started picking things up and he's pressing to go deeper.

"He is really shifty," said Brian Cushing, the Trojans' standout outside linebacker. "It was impressive to see what he could do out there, but we'll have to see what happens once we get people in pads and people start getting hit."

As per the program's freshman policy, McKnight won't be available for interviews this week. Asked whether McKnight might have an extra gear that the other Trojan tailbacks don't, running backs coach Todd McNair just smiled.

"He's alright," McNair said laughing. "You saw him out there. I mean it's early, but maybe he does have that different gear.

"The thing I'm really excited about Joe is he's such a quick learner. He started picking things up and he's pressing to go deeper."

McKnight wasn't the only back who seemed to get the coaches excited. Two bigger, more physical backs in Chauncey Washington and Allen Bradford also were singled out.

Before the Trojans headed off the field, McNair motioned for all of his running backs to gather. He saw McKnight off in the distance giving a hug to a little toddler.

Actually, if McKnight looks this sharp when the Trojans put pads on, there's no telling how far the PR campaign will go.

Bruce Feldman is a senior writer with ESPN The Magazine. His new book, "Meat Market: A Season Inside College Football's No. 1 Recruiting Machine," is on sale now.