This week's list topic is the biggest surprises of the first three weeks of the season. 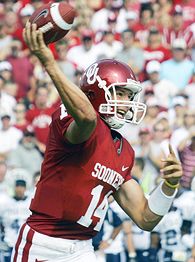 1. The almost flawless play of Sam Bradford
Among the first-time starting QBs, only Florida's Tim Tebow has been as sharp as Sooners QB Sam Bradford. Bradford has been ridiculously accurate, displaying great poise and a real command of the Sooners offense. His work against a formidable Miami defense was eye-popping and so are his numbers thus far: 80 percent completion rate and an 11-1 TD-INT clip. (Tebow isn't on this list because we expected him to be very good, not this good, but still)

This is the best reminder to all of us covering sports to not throw around the word "genius" unless someone cures a disease or invents something a little more meaningful than a way to slow down the zone read.

People expected the Irish to struggle, but nobody, not even ESPN colleague Mark May, could've expected the Irish to be this awful. The numbers are mind-boggling: They haven't scored an offensive touchdown yet, and they're last in the country in yards per play at a woeful 1.96. To put that into some perspective, next worse is San Jose State at 3.28. Only seven other schools are under 4 yards, while ND isn't even at 2. The Irish also are by far the worst in sacks allowed with 23. Yes, they are young, but this is still an offensive line with a center who has been starting since 2004 (John Sullivan) and an all-American candidate at tight end (John Carlson). Lots of teams entered the season with "only" two starters back on their O-lines, and none of them had a John Carlson to offset that. The Irish appear more unprepared each week. Everyone who has played them looks like a national title contender. It's gotten so bad that I got an e-mail from a Notre Dame fan who used to be a staunch Charlie Weis supporter, but who now writes: "Who was the bigger ND fraud? George O'Leary or Charlie Weis?"

3. The crafty new Oregon offensive coach, Chip Kelly
Not much was made of this new hire by Mike Bellotti, but the New Englander, who is actually from the same New Hampshire town (Manchester) as Florida offensive coordinator Dan Mullen, has really revved up the Ducks offense while cutting down on turnovers. Kelly, the old offensive mastermind of I-AA power New Hampshire, brought a system pieced together from sessions with, among others, Rich Rodriguez and the Wake Forest guys. The biggest benefactor has been QB Dennis Dixon, who last season was the most inconsistent QB in the country. Dixon has been spectacular thus far, throwing seven TDs and zero interceptions. "He is playing with so much confidence," says Kelly, "and we've taken some of the burden off him." Kelly has preached ball security and better decisions, reminding the speedster that if his first option on third-and-15 is covered, he probably has as good a chance of converting by taking off. As a result, Oregon is third in the nation in rushing at 326 yards per game.

4. The sinking fortunes of Auburn
The Tigers look like a wreck. Even though their first three games were at home, they very easily could've lost all three. Instead, they dropped two of three against unranked opponents. The defense has been shaky and the offense has been even worse. Fans are booing QB Brandon Cox. TB Mario Fannin has had fumbling problems, and OL King Dunlap, touted as their best O-lineman, has struggled even more than the freshmen up front. Overall, the Tigers are 98th in the country in sacks allowed, 93rd in scoring offense and 100th in total offense -- and it only figures to get worse as the schedule gets a lot saltier beginning at the end of the month. Oh, and by the way, Alabama might be steamrolling to an 8-0 start.

5. The ferocious Michigan State pass rush
Coach Mark Dantonio has the Spartans playing much harder this year, and that is most evident up front; MSU is tied for first in the country in sacks (17) and has already eclipsed last season's total. Their ringleader is Jonal Saint-Dic, who has five sacks and four forced fumbles.

6. Another Arizona step backwards
I really thought this would be the year coach Mike Stoops' team turns the corner. Instead, the Wildcats have continued to shoot themselves in the foot, losing twice to MWC programs. To sift through the wreckage from last weekend's loss to New Mexico, check out this Greg Hansen column; Stoops pinpoints the biggest issue:

"In my three-plus years here, this is far and away our most undisciplined team," he said in a frank self-analysis in which he called himself "foolish."

7. The Bruins' defensive breakdown
UCLA has a ton of starters back from the unit that made USC look really bad last season, but for all the expectations, coach Karl Dorrell's Bruins fell flat against a mediocre Utah team playing its backup QB. The Bruins, ninth in the Pac-10 in scoring and total defense and 112th in the country in pass defense, struggled with misdirection and some creative game planning, and now the "Can Karl" crowd is back to the barking.

8. The explosive Terry Grant helps turn the Tide
Many Alabama fans were buzzing about speedy little tailback Terry Grant in August, but Grant has been even better than advertised. He ranks eighth in the nation in rushing (134 yards per game), and he's averaging 6.5 yards per carry.

9. The reloaded Florida D
Everyone talks about the Gators offense, but it's the D, which returned only two starters, that has been a pleasant surprise. UF held a potent Tennessee offense to 20 points, seven of which were scored by the Vols D. The young UF defense is sixth in the country against the run. MLB Brandon Spikes, who anchors things in the middle, is looking like an All-SEC candidate, while the green secondary has been very solid.

10. USC center Kris O'Dowd
The big freshman from Arizona was not expected to be the impact newcomer for the Trojans. Heck, he wasn't even the freshman from Arizona most tabbed as the top newcomer (that'd be DE Everson Griffen). But O'Dowd, who jumped in for injured projected starter Matt Spanos, has been outstanding, especially versus Nebraska. He was blowing open holes for Trojans runners in the center of the Huskers D. Thanks in part to O'Dowd, the Trojans are sixth in the country in rushing, rolling for 264 yards per game.