C'mon out, coaches. Leave your parking garages and flag-in-the-flower-pot anonymity and step into the sunlight. If Mark Felt can do it, surely you can, too.

Deep Throat has put his name behind his legendary Watergate information. Wouldn't it be lovely if college football coaches put their names behind their ballots in the Poll Formerly Known As the ESPN/USA Today Top 25?

Sure, they've agreed to make their final ballots of the regular season public. And that's a start. That's progress. That beats the no-disclosure system we've endured  the system that left us wondering last December who trapdoored California out of the Rose Bowl, and why. 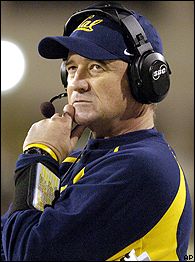 But why not make them public every week? That's what ESPN wanted, and because the college football sunshine law kept the votes anonymous, the network pulled out of the poll this week.

The system is now in your hands, coaches. The know-nothing sportswriters and their AP poll are out. The computer influence has been lessened. You finally have what you've always wanted  control. Now do the right thing, legitimize your poll and vote in public.

While the coaches have many justified concerns about making their weekly votes public, there are ways around it. For example:

Coaches say: Why provide weekly bulletin board material for teams we're going to play? If we rank an opponent lower than they believe they deserve, it's suddenly a flaming case of "disrespect" that becomes a big issue the week we play them.

I say: Maybe it's time to quit having it both ways on the bulletin-board issue.

Coaches are petrified of saying something opponents perceive as a slight, and that paranoia trickles down to their players. Yet if you ask the coach of Disrespected U. about the rare smack talk aimed at his team, what's the pat answer? "We don't pay any attention to that stuff. All that talk goes out the window as soon as the game kicks off. It has no bearing on the outcome." If the latter statement is really true, who cares where you rank or don't rank an opponent?

Maybe publishing a coach's vote would be like a shot of truth serum. His pregame hype of an opponent would have to be commensurate with his ranking of said opponent, wouldn't it? It could conceivably cut down on Lou Holtz Disease, which causes coaches to describe Louisiana-Lafayette in terms more appropriate for Louisiana State.

Coaches say: Why give the media and fans another blunt instrument to beat us over the head with on a weekly basis? It's not enough that we have to justify our play calling, our blown coverages, our depth-chart changes and our forebearance with little Franky Felon at outside linebacker? We already have to answer those questions at the weekly media luncheon, on the weekly league teleconference and after practice every day  and now you want Coach Chinstrap to have to explain to the Tullahoma Daily Disappointment why he ranked the Sooners sixth instead of fourth?

A weekly public vote shouldn't lead to a weekly public interrogation over said vote. Let the ballots be available, but give coaches the right to no-comment any questions about their ballots  until after the final one in December, when they should be compelled to comment.

To put some teeth behind it, give conferences the right to pass a rule prohibiting coaches from discussing their in-season ballots, just as they're prohibited from commenting about officiating. If that's not accountable enough, give coaches the option of releasing a short (like, one-paragraph) statement each Monday explaining some aspect of that week's vote  who they voted No. 1, why they dropped a school out of the Top 25, or anything in between.

Sure, there still will be the inevitable Internet insurrectionists. They'll seize upon a coach's ballot they don't like, link it on the Frothing Fan message board with the offending school athletic director's e-mail address and bury him in molten vitriol. (You wonder how I know this? Check my inbox after a controversial column.)

No problem. You can deal with those. Create a form response to the more responsible e-mails and utilize the "delete" key for the hysterical and the profane  and delegate that correspondence duty to an athletic department intern.

Coaches say: We spend all week totally immersed in our own team, our own game, our own game plan. It's too hard to keep track of what everyone else is doing on a given Saturday. We aren't informed voters, and publicizing our ballots will open us up to criticism for that.

I say: Sure, it's hard to keep track of an entire nation of games, especially when you have your own team to worry about. But, hey, the sportswriters face a similar task. Most are covering a game on Saturday and just trying to catch scores, updates and highlights where they can. (All of which has gotten much easier in recent years, by the way. More games are on TV, more press boxes have TVs, and live scoring updates are at your fingertips with the Internet.)

Maybe coaches need to take an extra 15 minutes Sunday morning reading recaps of other games and poring over the box scores. (And we know you read the Sunday paper, even if you say you don't.) Maybe they need to call their SIDs or other coaches to ask for details on how a certain game went down. There's nothing wrong with seeking some outside feedback  as long as you're still filling out your own ballot.

Coaches need to be convinced that full disclosure would improve the integrity of the current system  it might even save the current system. This could be the credibility boost the BCS needs. The coaches can come riding to the rescue, all by themselves.

I believe that the majority of coaches try to vote honorably and conscientiously, but the veil of secrecy keeps us from knowing for sure. When something strange happens, we don't know whether ballots have been tainted by cronyism, conference myopia or personal jealousies and rivalries. When Texas rides Mack Brown's voter-directed "Checkers" speech to the Rose Bowl and California is left holding the Holiday Bowl bag, the process becomes a veritable Petri dish for cultivating conspiracy theories.

If the ballots are public each week, at least the public will know who's doing what. Accountability is a good thing. Woodward and Bernstein might have needed a Deep Throat, but the college football polls don't.