"I'm kind of surprised," Bowden said wryly. "Looks like y'all haven't been reading the papers. Y'all don't know we lost some players?"

To the contrary. The big gathering of reporters around Bowden and the pile of cassette recorders in front of his face proved the fourth estate was very familiar with the Seminoles' bizarre and bumpy offseason. Endearing as Bowden is, we weren't all there for the homespun humor.

This was Bowden's first time answering questions about a summer during which Florida State made headlines for:

The winningest coach in Division I-A history has experienced a lot over his 29 years but when your QB is felled by a tick, you've pretty much seen it all. The legendary coach said linebackers Nicholson and Sims will likely play in the Labor Day season opener against Miami, but the other three are gone for the year.

"Can't stand many of these," Bowden said of the personnel losses. "You hope you have enough depth to overcome it." 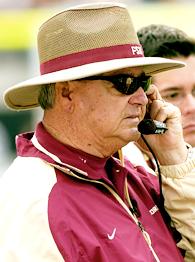 Florida State has long had more depth than 95 percent of the nation, but now it will be tested at key spots. This already had the makings of a tricky transitional season for the Seminoles, who have lost 15 games over the last four years after losing just 19 in the previous 14. Now, in the ACC's first year as a 12-team, two-division meat grinder, this looks like a full-blown challenge to their primacy.

The 'Noles will start a redshirt freshman quarterback against a loaded Hurricanes defense in the season opener. Twelve days later, they'll be the road team in dangerous Boston College's first-ever ACC game. Trips to Virginia, Clemson and Florida are also on the docket. FSU is spared a matchup with defending league champ Virginia Tech, but could catch the Hokies in the first ACC championship game.

"If we win that thing [the league title game] this year, we'll win a national championship," Bowden said. But he knows how hard getting there would be with such a callow squad.

"The one thing we do have is talent," Bowden said. "Now, if we can make 'em mature enough to get through that schedule, I don't know."

The position in need of immediate maturity is at quarterback. Florida State will enter August camp with Xavier Lee and Drew Weatherford "dead even," according to the head coach.

"We might even flip a coin to see who gives the first handoff," Bowden said. "We're hoping they both do real good, but one separates himself. Or we've got to decide to play both of them. I'd prefer to have one starting quarterback, but I'm not against playing two."

Bowden said his staff will not make drastic changes to the offense for Lee and Weatherford.

"I do have to find a way to keep it simple for them," he said. "But we can't shut it down. "Normally, you're a redshirt junior at Florida State before you play quarterback."

Sexton would have been a redshirt junior. He started seven games last year after senior Chris Rix faltered, and even after an unspectacular spring was set to be the man this year. Then came his public freakout in June.

The immediate assumptions about what caused Sexton to behave so erratically never included Lyme disease. But Bowden knew the character of the kid's family. Sexton's dad, Billy, had been on Bowden's staff for 29 years, and the head coach had known Wyatt since he was born. When doctors diagnosed the tick-borne illness, it silenced some pernicious speculation.

"He was acting strange, man, strange," Bowden said. "Then it all came to light. His mother and daddy couldn't figure it out. Nobody could figure it out."

It wasn't long after that Cromartie went down with his knee injury. Bowden said the big (6-foot-3, 202 pounds), fast corner was one of the top three players on his team and a high first-round draft pick, and now he won't play again until 2006.

The losses of Cromartie and Dickson make linebackers Nicholson and Sims all the more valuable. School policy says the two would be automatically suspended pending the outcome of the legal process if they had been charged with felonies. Bowden said their legal status remains up in the air, but if they're charged with misdemeanors, "it's in my hands." And his hands have tended to be very forgiving when it comes to playing time.

Bowden's fan base is primarily interested in winning, of course. And after 25 years of brilliance Florida State fans have become as spoiled as those at any Cadillac football school.

"We talk about building a monster. When you have great years, you have built a monster. And it's gonna get you. As soon as you falter, you're gonna catch it."

Bowden talked about USC's malaise between the John McKay-John Robinson Era and the current hegemony under Pete Carroll. Someone then asked whether his program might be in a similar malaise.

"I'm probably in it, and hope that we can pull it out," he said. "I kinda think we will, but you gotta do it."

One thing is certain: Even at 75, and even after a strange summer of ticks and Tasers, Bobby Bowden still isn't ready for anybody's rocking chair.

"I've never in my life, not a day, considered retiring," he said. "I've never even thought about it."