COLUMBUS, Ohio -- We're still five days from the first Ohio State-Michigan football game of this season, but some people already are talking about a January sequel for the national title.

At his Monday news conference, Tressel was asked whether he believes a team should be required to win its conference in order to play for the national title. 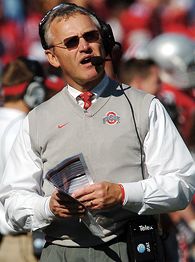 "Yeah," Tressel said. "Yeah.  The thing we say as we go into every year, if you want a chance to play for the national championship, you better make the assumption that you need to win every game in your conference and be a champion, and that's the way we enter it. I hadn't thought about it, but you asked the question so I gave you the short answer, I guess."

Under Tressel's philosophy, failure to win the Big Ten title would obviously preclude the loser of this Saturday cataclysm from a rematch in the BCS National Championship Game in Glendale, Ariz., Jan. 8. That means, if the coach sticks to his rhetorical guns, you won't be hearing the Buckeyes lobbying for a chance to play for all the marbles if they lose Saturday.

Most BCS gurus believe it would be a long shot for Michigan and Ohio State to remain 1-2 in the final standings Dec. 3, but there are scenarios under which it can happen. And there is fairly rampant speculation in this area of the country about playing what is arguably the nation's biggest rivalry game twice in one season -- with the second meeting at a neutral site in the desert.

The very thought of Michigan and Ohio State not battling in the cold of the Midwest in either team's home stadium wrinkles some traditionalists' noses. But it brought a gleam to the eye of Ohio State defensive end Jay Richardson.

"If there were to be a rematch," Richardson said, "it probably would be the biggest game in college football history.  How often do you have a rivalry game for the national championship? That would be huge."

Judging from what several Ohio State players said about the annual savagery of this game, the thought of doing it again six weeks later might not be palatable. Defensive tackle Quinn Pitcock said he barely got out of bed for a week after last year's game in Ann Arbor.

"I was completely sore," Pitcock said. "Every nook and cranny of my body ached.  You don't notice it during the game. It's not until afterward that you realize, 'Wow, I really overextended myself.'"

So the overused analogies to a heavyweight fight could be appropriate here. This could play out like "Rocky."

At the end of the movie, a thoroughly exhausted Apollo Creed says there "ain't gonna be no rematch."