It's tough to find an objective observer who thinks Miami will beat Florida State this weekend. That has to play into the hands of the Hurricanes from an emotional standpoint, as they are coming off an ugly win against West Virginia and enter this game as the underdog.

One has to go all the way back to the 2000 season to find the last time Miami was not favored in a game, and you can be sure the 'Canes are relishing the opportunity to prove some people wrong.

The key in this game will be how Miami's defense performs against quarterback Chris Rix and the Florida State offense. Rix has been much more consistent in his third season as a starter and shown much more patience and leadership than in the past. This will be his toughest test of the year, though, and Rix will need Greg Jones and Lorenzo Booker to get on track in the running game and if he hopes to have success throwing the ball.

Jones torched the Hurricanes for 189 yards last year and he will be a factor again this season. If he and Booker can force Miami to commit a lot of players to the run, Rix will have a much easier day. But I wouldn't be surprised to see the 'Canes come up with a new wrinkle on defense to take away the run and force the Seminoles into obvious passing situations.

Miami is concerned about communication in the secondary, though, with strong safety Mo Sikes out of the lineup. Sikes was the quarterback of the secondary and the worry is that there could me miscommunication that leads to busts in the back end resulting in big plays.

And with the man-under coverage the Hurricanes play, there is potential for Rix to find some room to scramble if his receivers are covered. Miami has been hurt by that in the past and Rix has the ability to do it again.

On defense, Florida State is back to the form it displayed in the mid-to-late 1990s. The 'Noles are once again playing with speed, swagger and an aggressive attitude. The biggest difference has been the play of the defensive line, led by ends Eric Moore and Kevin Emanuel, which has made life easier for the secondary as well.

All the talk surrounding Miami's offense has been about the loss of running back Frank Gore and how the ground game will fare without him, but I would argue the 'Canes were struggling to run the ball even when he was healthy. Teams were loading up the line of scrimmage and putting pressure on quarterback Brock Berlin to make plays in the passing game.

Most defenses have been playing a unique defense against Miami that features a soft zone in the back end and plenty of men in the box. Opponents are looking to prevent the big play and keep the short passing game in front of them because they question whether Berlin can be a consistent passer over a 12-play drive.

Where Florida State is concerned, the Seminoles are confident their front can defend the Miami running attack and put as much pressure as possible on Berlin.

It's easy to point the finger at Berlin when looking for a reason the Hurricanes offense has struggled, but despite his unlimited physical ability he is a young player in terms of game experience at Miami and is surrounded by skill players in the same position.

Inconsistency is almost expected from guys like wide receivers Ryan Moore and Roscoe Parrish and running back Jarret Payton. Until they get more practice reps together they will be an up-and-down unit.

Florida State comes into this game with some big advantages in terms of how well they have played and how Miami looked against West Virginia, but emotion plays a huge part in rivalry games and Miami has been painted into a corner with all the negative talk. I would be shocked if Miami didn't play with at a whole different level in Tallahassee.

Tune in to GameDay Saturday morning for my prediction, and keep reading for a look at some of the other must-see games on Separation Saturday.

Expect Chance Mock to start at quarterback against Oklahoma because of his steady hand and experience with the hype surrounding the Red River Shootout, but the mobility of freshman Vince Young may provide Texas with its only reliable method of moving the ball. Young doesn't pose much of a passing threat, but he can throw deep well enough to keep the Sooners honest.

The Longhorns offensive front against the Oklahoma defensive line is a mismatch that favors the more physical, more athletic Sooners, who will in all likelihood hold Texas under 50 yards on the ground.

The addition of JUCO transfer Dante Nicholson to the Oklahoma secondary has been huge, and Nicholson's play is so reminiscent of former OU standout safety Roy Williams it's scary. Nicholson has the ability to walk up to the line and be tough in run support and is athletic enough to cover receivers in space, and he will be all over the field Saturday.

Texas receivers B.J. Johnson, Sloan Thomas and Roy Williams have not been overly-impressive against OU in the past and have talked a lot about what this game means to them, but Derrick Strait is one of the best cornerbacks you've never heard of and he and Antonio Perkins will hold their own against the Longhorns passing game.

The only chance Texas has if its defense plays extremely well. The 'Horns have to to put pressure on Oklahoma quarterback Jason White, who is off to unbelievable start throwing from shotgun and utilizing play action from the I-formation.

Oklahoma's offense has evolved into a multiple attack and the biggest reason is the play of receivers like Mark Clayton and Brandon Jones, who lead the most athletic group of wideouts coach Bob Stoops has had at his disposal since arriving in Norman. Texas will have to pressure White all day to have a shot at this thing.

But in the end the Oklahoma defense will be too dominating and White will throw for more than 300 yards. Oklahoma wins 34-13 and White becomes your new Heisman Trophy front-runner. 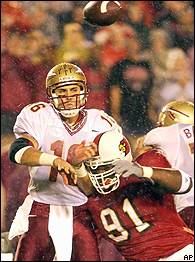 This is the first road game of the year for Ohio State and quarterback Craig Krenzel is expected to be back from an elbow injury at close to 100 percent. The Buckeyes are another team that will have trouble getting more than 50 yards from it's running backs, so Krenzel's scrambling ability will be just as important as his passing. He will likely lead Ohio State in rushing, and whether or not he has time to hit Michael Jenkins and Drew Carter down the field will determine which team wins this game.

Wisconsin has gotten back to basics over the last few weeks and returned to the physical running game that has served it so well. The Badgers expect injured running backs Anthony Davis and Dwayne Smith to test their tender ankles, but Booker Stanley will likely get the majority of the carries.

Jim Sorgi is a streaky passer and will have some opportunities to hit Lee Evans and his fellow wideouts, but should he struggle Wisconsin coach Barry Alvarez will not hesitate to go back to his bread and butter in the running game.

This will be a typical, hard-fought Big Ten game in which special teams, defense and turnovers make the difference. The fact that the game is at night in Madison is a huge advantage for the Badgers, and a couple of costly turnovers late will allow Wisconsin to take advantage of the home field for a 23-20 win.

No. 7 Nebraska vs. Missouri (7:00 p.m., TBS)
This game reminds me of last year's Iowa State-Nebraska meeting in which Seneca Wallace helped the Cyclones pull off the upset. Missouri has the same kind of mobile quarterback in Brad Smith and is looking to snap a streak of 13 straight home losses to Nebraska. The Cornhuskers defense is legit, but strange things happen in college football and Smith's mobility and home field advantage will lead the Tigers to a 24-23 upset.

Auburn got back on track emotionally after last week's win over Tennessee and the players seem to have bought into the goal of picking up the pieces after a tough start by winning the SEC. But the West division title goes through Arkansas and the Hogs are no fluke. The combination of Cedric Cobbs running and Matt Jones passing and scrambling will lead The Razorbacks to a crucial, 27-23 win.

No. 10 Georgia vs. No. 14 Tennessee (7:45 p.m., ESPN2)
With the passing of David Greene, the skill of receiver Fred Gibson and running back Michael Cooper and a defense led by sparkplug end David Pollack, Georgia is the most talented team in the SEC East right now. And don't forget about Thomas Davis, one of the most improved players in the country.

Tennessee is coming into this game in a tough spot after last week's loss to Auburn. Look for quarterback Casey Clausen to again have to throw the ball a lot in the direction of James Banks and Chris Hannon, and if they can connect it will open things up for the running of Cedric Houston and Jabari Davis.

This should be a typically exciting SEC night game, with Tennessee kicker James Wilhoit knocking through a last-second, game-winning field goal for a 31-28 victory.

Notre Dame vs. No. 16 Pittsburgh (6:00 p.m., ESPN)
Notre Dame freshman quarterback Brady Quinn will be making his first career road start in this game, and end Claude Harriott and the rest of the the Pittsburgh defense will make it tough for him. The big-play ability of quarterback Rod Rutherford and quarterback Larry Fitzgerald will be on full display in a 30-13 victory.

No. 21 Kansas State vs. Oklahoma State (12:30 p.m., Fox Sports Net)
Kansas State finally got a push up front on defense against Texas, resulting in six sacks, and the same kind of effort will be needed against an Oklahoma offense that features quarterback Josh Fields and stud wideout Rashaun Woods. That improvement and the running duo of quarterback Ell Roberson and running back Darren Sproles will lead the Wildcats to a solid victory in Stillwater, 31-23.

Kirk Herbstreit is an analyst for ESPN College GameDay and a regular contributor to ESPN.com during the college football season.