One of the best things about Big Ten football is the trophies. Purdue and Indiana play Saturday for the Old Oaken Bucket. Minnesota won Paul Bunyan's Axe from Wisconsin, but lost the Little Brown Jug to Michigan.

The Ohio State-Michigan game has a trophy, too. It's called the Big Ten Championship.

The Buckeyes and Wolverines don't play for the conference title every year. It just seems that way. The 100th Ohio State-Michigan game on Saturday has the Big Ten at stake, and at the very least, a Rose Bowl berth.

If the No. 4 Buckeyes (10-1, 6-1) win, they have a good chance of defending their national championship in the Sugar Bowl. If the No. 5 Wolverines win (9-2, 6-1), not only do they clinch their first trip to Pasadena in six years, they have a great chance of ruining Ohio State's season. Don't ask them which is more important.

This game is so big that Keith Jackson is leaving Pacific Standard Time for it. 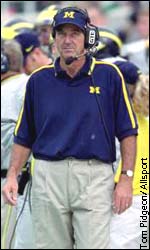 "If this isn't a great rivalry, why in the hell are all you staying around here to listen to me?" Michigan coaching legend Bo Schembechler asked Monday at a press conference in Ann Arbor. "I haven't coached in 14 years."

That Bo. What a kidder.

The legends of Hayes and his hatred for all things maize and blue continue to be told. No matter what the gas gauge said, Hayes would not buy gasoline until he crossed the state line into Ohio.

"Before you left for Ohio State as a freshman, you know Michigan was a big game according to Woody," former Buckeye All-American linebacker Randy Gradishar said. "He let you know that before you even signed a letter of intent. The first meeting of the year was always about Michigan."

Hayes called them "the guys up north." Schembechler, who played for Hayes at Miami (Ohio), coached on his staff at Ohio State for six seasons. Bo took over at Michigan in 1969. That season, the Wolverines won what many -- at least many in the 49 states outside of Ohio -- believe is the greatest game in the rivalry.

Defending national champion Ohio State came into the game 9-0 and ranked No. 1. Hayes felt to the day he died that his '69 team was his best. Yet his protégé coached Michigan to a 24-12 victory, the first salvo in what is referred to as the "Ten Year War."

From the time Schembechler arrived at Michigan until Hayes was fired after the 1978 season, Michigan won five, Ohio State won four, and they tied in 1973. Just as revealing is the fact that in that time, Hayes went 1-4 in Rose Bowls, and Schembechler went 0-5.

"I talked about it all the time," Schembechler said. "I did something every day to beat Ohio State, and to beat Woody."

Every day in spring practice, and every Monday during the season, Hayes drilled his team for the Michigan game, former Ohio State All-American offensive lineman John Hicks said.

"If you never beat Michigan, you get a little mark against you as a Buckeye," Hicks said. "They'll tell you it's a dark spot."

Hicks won two games against Michigan in the early 1970s, which means that he owns two pair of gold pants. Ohio State players who beat Michigan are awarded jewelry, gold football pants, a custom that goes back to an Ohio State coach imploring his players to beat Michigan because they put on their pants just like we do.

"They are a badge of honor," said Hicks, who runs a real estate business and a travel business in Columbus. "Wives wear them. You'll see Buckeye wives from the '40s, '50s, '60s, '70s, '80s. The first thing they do is pull out their Michigan pants. You'll hear someone say, 'You only got one?' That wife will give her husband a dirty look."

The intensity of the game Saturday may approach that of the Ten Year War. Both teams have greater goals than winning this game, at least theoretically. Ohio State can play for the national championship. Michigan can go to the Rose Bowl.

Asked what were more important, his two Rose Bowl rings or his one pair of gold pants, Gradishar, in the automobile business in Denver, couldn't make a choice. In the book Woody's Boys, an oral history of Hayes' 28 seasons at Ohio State, Hall of Fame (College and Pro) guard Jim Parker made his.

"I'd rather lose every other game," Parker said, "and win the Michigan game."