Proving again that the Hot Stove League is not just for baseball, Matt Leinart's decision regarding the NFL has made ESPN's recent birthday the ideal vehicle to assess his career at USC and where it stands among the best college quarterbacks of the last 25 years.

The criteria included not only individual performance but team performance as well. That's how we measure quarterbacks come Heisman time, so this is no different. One more thing -- career award means, the more seasons the better.

10. Michael Vick, Virginia Tech
As a redshirt freshman, he led Division I-A in passing efficiency and took the Hokies to the national championship game. A sprained ankle hampered him as a sophomore, but he still went 20-1 as a college starter, and his greatest performance may have come in a loss, the 46-29 defeat by Florida State in the 2000 Sugar Bowl. The Atlanta Falcons cut short what could have been the greatest college football career ever.

9. Vinny Testaverde, Miami
Testaverde did everything but win a national championship. The 1986 Heisman winner didn't play well in his biggest game, the 1987 Fiesta Bowl loss to Penn State, but he still threw for 48 touchdowns, 6,058 yards and only 25 interceptions as a 'Cane.

8. Matt Leinart, USC
He is 24-1 as a starter with two national championships and a Heisman to show for his career. His first college pass went for a touchdown. A 2005 season would likely move him up this list.

7. Jamelle Holieway, Oklahoma
He came off the bench as a freshman to lead the Sooners to the 1985 national championship. For four seasons, he excelled at making the Sooners' trademark option attack purr. He rushed for 2,713 yards and threw for 2,430, which proves how difficult it was for defenses to prepare for him. Holieway went 30-3 as a starter, better even than Jason White, who just retired at 27-3.

6. Ty Detmer, BYU
He won the 1990 Heisman as a junior and threw for more than 15,031 yards, breaking the previous record by nearly 4,000 yards, and 121 touchdowns. He may have been Norm Chow's prize pupil, until Leinart came along. 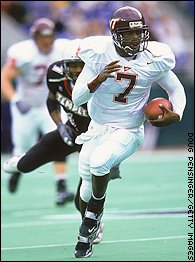 5. Peyton Manning, Tennessee
His Vols' inability to beat Florida cost Manning at least
one Heisman, as well as a shot at a national championship. But the mixture of arm and mind remains unparalleled to this day. Manning threw for 11,201 yards, 89 touchdowns and only 33 picks.

4. Doug Flutie, Boston College
All right, BC didn't sniff a national title during Flutie's four seasons. But Flutie resurrected a floundering program and set it on the road to where it is today, preparing to join the ACC. Though he threw for 67 touchdowns and more than 10,000 yards, Flutie Magic defied mere numbers.

3. Danny Wuerffel, Florida
Wuerffel led the Gators to play for two national titles and win one. He threw for 10,875 yards and 114 touchdowns, and retired with the highest career passing efficiency rating in history (163.6). Moreover, Wuerffel spent more energy learning from coach Steve Spurrier than listening to the barbs that could shatter a quarterback's confidence. 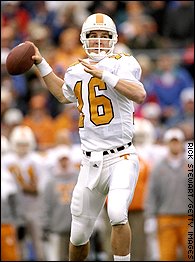 Like Wuerffel, Weinke played for two national titles, won one and a Heisman as well. Weinke won 25 straight games as a starter, finished 32-3, and threw for 9,839 yards and 79 touchdowns. The leadership he brought as a minor-league washout in his late 20s only added to his command of the locker room, the huddle and the field.

1. Tommie Frazier, Nebraska
He led the Huskers to two national titles (1994-95) and threw for 43 touchdowns and ran for 36, which seems as good a definition of option quarterback as any Merriam-Webster might devise. Frazier became known for his toughness, both in refusing to be tackled and in refusing to lose. Finally, he dragged Nebraska out of a rut and put them on the road to coach Tom Osborne's greatest successes.