Three times over the last 15 years or so, the University of Pittsburgh approached former Panther defensive lineman and hometown hero Dave Wannstedt about coming home to be head coach at his alma mater. Three different athletic directors, each of whom believed Wannstedt could bring back the glory days, approached him. Three times, Wannstedt said no.

Last fall, after Wannstedt resigned as head coach of the Miami Dolphins, a fourth Pittsburgh athletic director, Jeff Long, believed it to be the perfect time to bring Wannstedt back to his hometown, where his mother still lives.

And wouldn't you know it? Wannstedt said no again. 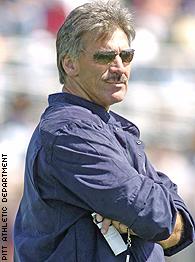 "I told everybody in my family I was not going to take the job," Wannstedt said. "I didn't get a phone call for a week. I think everybody was in shock that I said no."

You know the ending, of course. When Notre Dame coach Charlie Weis makes his debut against Pittsburgh at Heinz Field Saturday, Wannstedt, 53, will be on the opposite sideline. Without realizing it, he needed more time to consider the job. He also needed a well-timed kick in the pants from an old friend and mentor.

"At the end of the day, I understand what it takes to win a championship," Wannstedt said. "I really needed to be darn sure that this was the type of job that I wanted to get into. In my mind, I hadn't researched it. I got on the phone, and I said I wasn't interested, and I'd help out any way I could."

Wannstedt called his NFL friends who are now collegiate head coaches: Pete Carroll at USC, Chan Gailey at Georgia Tech, Mike Shula at Alabama. Wannstedt began to think about how much he enjoyed being around young people. And then came the foot in the rear from a man who hired Wannstedt at the University of Miami, with the Dallas Cowboys and with the Miami Dolphins: retired coach Jimmy Johnson.

"Jimmy and I talk once a week," Wannstedt said. "He's been the biggest influence on me professionally. He's not going to tell me what I want to hear. Those kind of people are tough to find. I started to get calls from NFL teams about assistant head coaching jobs, running defenses. When I explained them to Jimmy, he said, 'Hey, Dave, you've made it clear you're going to coach again. You've talked about the [Pitt] job for 30 years. The timing of this thing is right.'

"I sat down with my wife. I had a conversation with Jeff Long. I was in the chancellor's office within 12 hours and it was done."

The result has been beyond a marketer's most feverish hopes. Pittsburgh loves its favorite sons. Behind the size of a major-league city is a provincial town that dotes on homegrown coaches, such as the longtime coach of the Steelers.

"Pittsburgh is a different town," junior linebacker H.B. Blades said. "When they get one of their former sons back, like Bill Cowher, it's important to them."

Optimism has become as fashionable in Pittsburgh as a Ben Roethlisberger jersey. Not only is one of their own in charge, but Panther fans see in Wannstedt their own Carroll: a recycled NFL coach who discovers the perfect fit in college. Wannstedt welcomes the comparison. He even buys into it.

"The emotions of going back are big," Wannstedt said. "I was there the last time Pitt won a national championship [1976]. Over the past 30 years -- it's going to be 30 years next year -- I felt in my heart that there were very few people who could take the program and pull it together who had actually lived the story. I would have a tough time doing it for any other college."

Wannstedt won a ring as a graduate assistant on that Pittsburgh team, and another one in 1987 as defensive coordinator with Johnson at Miami. An All-American safety on Wannstedt's defense, Bennie Blades, is the father of H.B. Blades.

"My father told me he had a lot of fun, because Coach Wannstedt made it fun," H.B. Blades said. "He basically made my dad an All-American. My dad is much more involved now. He is going to come to three or four games. I don't think my dad ever talked to Coach [Walt] Harris."

It's often true in sports that no matter what the personality of a coach, his successor will differ by 180 degrees. Harris took the Panthers to a BCS game last year, but he couldn't leave for Stanford quickly enough. Harris is a clinician. Wannstedt has a warmer personality.

"He knows where we're at," H.B. Blades said. "We know how he's thinking. It was very difficult [last year]. Coach Harris is more of an offense guy. He stood with the offense. Coach Wannstedt let everybody know he's a head coach. He [watched] my position group in every practice. We were not used to that. We were not used to a guy helping us become better players. Coach Harris didn't deal with us."

Wannstedt has made inroads for Pittsburgh in midwestern recruiting, if summer commitments are any judge. How long that lasts will depend on the Panthers' success in defending their title in a changed Big East. But Wannstedt will be selling from the heart.

"I believe in it," he said. "I know what the city is about. I know what the people are about. They know I'm not going anywhere. At this point in my life, where do I want to live? Who do I want to be connected with? Where can you go that would be exciting to go in there and do something good? In my mind, there are very few places like that. What would be better?"