GAINESVILLE, Fla. -- They said that Urban Meyer couldn't bring the spread option into the Southeastern Conference. That gimmickry may work at Bowling Green, and it may work at Utah, wherever either one of those places is, but the only people he would fool with it at Florida were the guys who hired him.

If Saturday night is any measure, they were right. The Gators had a bad case of the third-and-longs the entire game against Tennessee. The running game rarely strayed from the line of scrimmage. Quarterback Chris Leak, even operating out of the shotgun, didn't have time to throw. 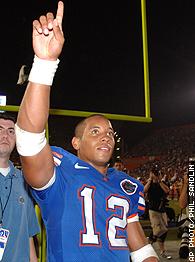 And the sons of Old Florida, by God, loved every minute of it. The Gators put together two offensive drives all night for 10 points, got six points as gifts from the Volunteers, and ground out a 16-7 victory before a school-record crowd of 90,716.

The Gators are 3-0, they beat their SEC East rival for the first time in three years, and the fans went home hoarse and happy.

"We are not a great football team," Meyer said. "That was a great win by a great defense, pretty good special teams, and an inadequate offense."

The Gators may take solace in being the best offense in the Swamp on Saturday night. Tennessee (1-1) finished with only 213 total yards, and the Volunteers' duo of Erik Ainge and Rick Clausen proved the adage that having two quarterbacks is the same as having none. In fact, the Vols' problems may be worse, if only because they aren't trying to employ an offense as they learn it.

The Gators have been immersed in the spread option since Meyer arrived last January. On the second possession of the game, they ran it like they've been running it all their lives. They went 80 yards in eight plays, closing with a touchdown on one of Meyer's favorite calls.

From the Tennessee 18, Leak and tailback DeShawn Wynn went left, looking as if they would run the option. Instead, Leak pitched the ball to wideout Andre Caldwell running from left to right. Caldwell circled around and had enough room to do backflips into the end zone. Florida led, 7-0, with 4:14 left in the quarter, and the crowd gasped in anticipation of what this offense would achieve.

But that would be the Gators' only touchdown drive of the game. More representative of the Florida offense for the evening was the result of Meyer's decision to go for fourth-and-inches at the Florida 44 in the second quarter. Tennessee defensive tackle Jesse Mahelona knocked Leak back, and it looked as if the power had shifted, literally, from Florida to Tennessee.

"We have four senior offensive linemen and a quarterback who has played three years," Meyer said. "Go get six inches and let's go play football."

As the final score indicates, the Gator defense didn't allow the Vols to take advantage of that opportunity. That made Meyer feel better, of course, but he had no problem speaking up about his concern for the offense.

"We're just not blocking people," he said. "That's two out of three games they haven't played well. I'm not sure what it is. That's not a position where people haven't played. We've got to block people."

For the next two quarters, if the Gators were going to get the ball on the fun side of the 50, they needed some help. Tennessee volunteered, offering a pair of kicking-game mistakes in the third quarter.

Jonathan Hefney fumbled a punt at the Tennessee 28, which the Gators turned into three points without the benefit of a first down. Chris Hetland kicked a 38-yarder to give Florida a 10-7 lead.

On the Vols' next possession, facing a fourth-and-nine at the Tennessee 32, freshman punter Britton Colquitt tried to complete a pass to his gunner, Inquoris Johnson. Safety Tony Joiner broke it up.

The Gators' scoring drive, if we must call it that, went 13 yards in seven plays and ended in Hetland's second field goal, this one from 35 yards out. The offense pieced together a 16-play, 68-yard drive that took more than half a quarter, but Hetland finished it with a 20-yard field goal with 8:02 left in the game.

The victory provided some salve for the offense, at least until they get in meetings Sunday and watch video.

"It would be more painful [to watch] if we lost," Florida center Mike Degory said. "It's still going to be painful."

Degory and Meyer both groped for words to discuss the offense, perhaps in an effort to be polite.

"It is early," Degory said. "It's an excuse. We have to prepare better."

"For the third game, he looked terrific," the coach said. "He still is not comfortable with our run game. It requires him to make the proper read and he missed some of them."

Leak, who finished 17-of-26 for 179 yards, preferred to take an optimistic tone.

"We're getting real comfortable," he said. "The guys are just going out and playing. ... They're not thinking as much. We're out there making plays."

Perhaps a little more thinking would be in order. You can bet that the offense will be reschooled this week, starting Sunday in meetings. If the Gator offense had a signature play on Saturday night, it may have been with 57 seconds to play. Florida had a fourth-and-five at the Tennessee 32. Meyer didn't want to risk kicking a field goal, and all the dark possibilities that go with it.

Instead, he went for Tennessee's jugular. Leak dropped back and saw his favorite target, Chad Jackson, open and heading toward the end zone. Leak overthrew him.