What is the matter with Mike Shula?

He's in his third season in Tuscaloosa, and he just doesn't understand. No comprende. Doesn't get it. He's a few chain links short of a first down.

The role of head football coach at the University of Alabama has been bigger than life ever since Bear Bryant created the modern version of it nearly 50 years ago. The coach gets his own state trooper. He gets his own television show. He throws a bigger shadow than the governor. 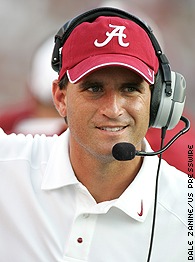 The trappings of the Alabama job fit the inflated self-image of most head coaches, who think of their best selves as somewhere between Bryant and Nero.

Here Shula is, having nursed the Crimson Tide from the emotional and probational breakdown of the last two years into robust health. Alabama has a 4-0 record, a No. 15 ranking, and a good chance to beat No. 5 Florida (4-0) Saturday at Bryant-Denny Stadium.

Cue the trumpets! Toss down the rose petals! Tear up the contract! That's what college head coaches demand these days. Athletic directors shrug, jack up the cost of a ticket and move on.

And that's exactly what's wrong with Shula -- he doesn't demand any of that. When Alabama extended his contract in June, Shula described himself as "humbled." All most coaches know about humble is that it rhymes with the f-word.

Take the night in late August when Hurricane Katrina roared through Tuscaloosa. Shula was scheduled to speak at the Tuscaloosa Quarterback Club.

"I kept calling, asking them if they were going to cancel," Shula said. "They said no."

So Shula went. He kept his obligation. He spoke while the storm raged. He stayed to answer every question. And when the power went out, he and the audience locked arms and, guided by the light of their cell phones, walked out to the cars.

The wise guy might point to that story as one more piece of evidence that Shula, who turned 40 last summer, doesn't have enough sense to get out of the rain. There is a portion of Alabama fans who believe Shula has good reason to be humble. If the Crimson Tide beats the Gators on Saturday, Shula's winning percentage will climb back to .500 (15-15) for the first time since the fourth game of his career.

Hey, you try to compete in the Southeastern Conference with the team Shula had a year ago. With one healthy tailback and no quarterback, Alabama looked like the guy who walked into a knife fight with plastic cutlery. That the Tide even made it to a bowl -- they lost, 20-16, to Minnesota in the Music City -- is proof that Shula has a clue about coaching.

It's the peripheral stuff he needs to work on. He's supposed to be the imperial coach. If Shula were any more unimpressed with himself, he would be an Auburn fan.

"So many times coaching can lead to over-inflated egos," offensive coordinator Dave Rader said in an e-mail interview. "His [Shula's] actions and words have given no impression other than he desires the best for Alabama, as opposed to taking a track that might give a perception that he is 'all that.' It is a rare commodity."

Head coaches have a sense of entitlement that comes with absolute power: free car, free clothes, free meals. They might have salaries with a lot of zeros, but you could get most of them to go for it on fourth-and-20 before they'd pick up a check.

Shula gets a Nike clothing allowance every year. He spreads it among the secretaries and other support staff in the football office.

When Shula arrived at Alabama in May 2003, no one was more surprised than he. Shula had played quarterback for the Crimson Tide in the mid-1980s and never returned. He had been a career NFL assistant. When athletic director Mal Moore needed to find a replacement Alabama fans could rally around after the Mike Price debacle, he found Shula.

"I'm sitting in Miami minding my own business," Shula once told a friend. "A guy goes into a strip club, and then I get a call to interview for the head coach at Alabama. Go figure."

"He's become more comfortable with us," said DeMeco Ryans, a senior linebacker and defensive captain. "It's his first head coaching job. He had a little growing and maturing to do. We've seen him grow as a coach. His first year, as a speaker, he was about a B-minus. Now, he's an A-plus."

"I'm more confident," Shula said. "We have been through a lot. Sure, it's a big difference from the NFL to here. There are a lot of things I'm still learning. Some things I took for granted. For example, our first road trip, teaching the guys how to act on an airplane. [Defensive coordinator] Joe Kines said something to me. I would have never thought to do that.

"I told them, you've got to treat it like a business trip. Treat the stewardesses and the pilots with respect. Clean up after yourselves."

Standing before a group of people, Shula can be as entertaining as the keynote speech at a mortuary convention. In a small setting, however, be it a one-on-one interview or an 8 a.m. staff meeting, his wit and warmth are evident. He is more in control, less likely to search among the three former head coaches (Rader, Kines, Sparky Woods) on his staff for the answer.

Shula arrived as a career NFL assistant and found himself in charge of a team emotionally bruised from its abandonment by coach Dennis Franchione and stunned by the firing of Price. Shula has remained patient, oblivious to the demands of Tide fans. He remains on his own path, free of the trappings of the Crimson version of the imperial presidency.

He said this about the Florida game Saturday, but it could apply to his career.

"It's early yet," Shula said. "We'll find out a little bit more about ourselves."