TUSCALOOSA, Ala. -- So this, young people, is what Alabama football once was. This is what it was, once upon a time, before the NCAA debated giving the Crimson Tide the death penalty, before head coaches used Tuscaloosa as if it were a summer rental, before losses to Hawaii and Louisiana Tech and Northern Illinois.

It all came out on a warm, breezy Saturday -- all the heartbreak and the pain. Talk about your cathartic experiences. Six years of frustration erupted Saturday in a victory that will be remembered around here long after Alabama has returned to the nation's elite.

Which, if the Crimson Tide continues to play as it did Saturday, will happen sooner than anyone around here had hoped.

Florida came into Bryant-Denny Stadium with a No. 5 ranking and a 4-0 record and got humiliated by a faster, tougher team. No. 15 Alabama won, 31-3, by dominating both lines of scrimmage and by making one big play after another on both sides of the ball. The Crimson Tide, not the Gators, made it to 5-0. 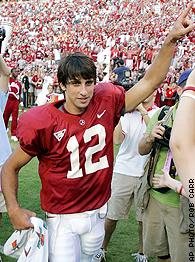 "I realize we'll get a little recognition," said Alabama coach Mike Shula. "We've got to learn how to handle that. I think we took a step today."

Imagine that -- Alabama having to learn how to handle recognition for what it achieved on the field.

Success is new for the players as well as the fans, who started out at a roar and only got louder. That's what happens when your first play from scrimmage is an 87-yard touchdown pass, when your defense doesn't give up a first down until it's 17-0, when your defense stuffs Gator tailback DeShawn Wynn on fourth-and-goal at the 1.

And all that had happened only one play into the second quarter.

"That team in red was much more prepared than the team in orange," said Gators coach Urban Meyer, who suffered the most lopsided loss in his 51-game coaching career and saw a personal 20-game win streak end.

A Meyer team had only been held without a touchdown once before Saturday. The spread option, heralded as the offense of the 21st century, met up with old-school defense. Alabama had more sacks (four) than it gave up plays over 20 yards (three).

After the game, as Kines walked into the media room, he got a hug from his boss's dad, Don Shula -- wearing a crimson shirt with a white A on it.

"Arnsparger would have been proud of you!" the Pro Football Hall of Fame coach said, referring to his former defensive assistant, Bill Arnsparger.

It may have been Oct. 1, not Jan. 1, but the celebration had a late-season feel to it. If Alabama can find a way to play like this every week, Jan. 1 will be a no-brainer.

"We lost a lot of one-on-one battles," Meyer said. "They are a very fast team. They looked a lot faster than we did today."

And that may be the most amazing thing of all. Over the past several years, blue-chip recruits avoided Alabama as if it were a chemistry class. By one unofficial count, Alabama has two five-star players -- senior quarterback Brodie Croyle and junior fullback Tim Castille -- and they came because their dads played here before them.

All Croyle did was have the game of his career Saturday. On the first play from scrimmage, he threw a 50-yard strike to wide receiver Tyrone Prothro, who shook off a tackle and took it 87 yards for a touchdown.

Late in the second quarter, Croyle repeated the long-pass, one-play scoring drive, taking a three-step drop and searing a pass into the hands of flanker Keith Brown, who outraced three Florida defensive backs for a 65-yard touchdown. Croyle threw the fastball in order to thread it between the linebacker and safety.

"Keith said he couldn't see the ball," Croyle said. "He just saw a speck and threw his hands up."

Croyle finished 14-of-17 for 283 yards and three touchdowns, which gave him 36 in his injury-plagued career. That broke a record shared by his coach. Croyle has begun to achieve what everyone believed he would when he turned down Florida State to stay at home.

But this Alabama team hasn't been built with Croyles. Alabama won this game with overlooked homegrown players like senior linebacker DeMeco Ryans, recruited by Ole Miss, Mississippi State, UAB and Louisville, and with Prothro, considered small even now at 5-8, 178.

Prothro lined up at five different positions Saturday, and finished with 154 all-purpose yards. He redeemed his fumble of the Gators' first punt by catching the long pass from Croyle four plays later. He came into the game as the Tide's most dangerous player and left on a stretcher in the fourth quarter, his left leg broken in two places after an end zone collision.

He is out for the season, and his coaches and teammates sounded incredulous at the question of why he and the rest of the first team remained in the game with the score 31-3 midway through the fourth quarter.

"We're not about to start that again," said Croyle, who tore his ACL last year in a non-contact injury with Alabama leading I-AA Western Carolina, 31-0. "Florida can score at any point in time. We knew that. We wanted to get one more touchdown."

Only the media expressed any interest in analyzing the loss of Prothro. Alabama just wanted to continue the celebration.

In the final minute, as the entire stadium roared the "Rammer Jammer" cheer at the Gators, no one yelled louder than defensive end Wallace Gilberry, who pogo-sticked his body as he cheered. After the game, the Tide players ran into the tunnel beneath the south end zone, and within seconds, came back out. They ran to the student section, helmets raised, as the Million Dollar Band played "Yea, Alabama!" for about the millionth time.

Defensive tackle Jeremy Clark waved one of the cheerleader's flags. Fullback Kyle Bennett, all 221 pounds of him, rode on the shoulders of guard Mark Sanders. A few fans in the end zone leaned over the railing on the wall 10 feet above the field, hoisted cornerback Simeon Castille up for a prolonged hug, then gently lowered him to earth. Shula jogged over and raised his cap four times in appreciation, the roar increasing as the students saw him.

The Crimson Tide is off this week. Maybe Shula can squeeze in some work on dealing with high expectations. They arrived in Tuscaloosa. Now we find out if they are here to stay.