TUSCALOOSA, Ala. -- Before two divisions, before the Spurrier-Fulmer wars, before even the Iron Bowl, there was Alabama-Tennessee. It is a rivalry with roots nearly eight decades deep, roots that have been nourished by history and passion, the two most important nutrients of Southern football.

The rivalry is known as the third Saturday in October, even though in the last 10 years it has kept that historic date only three times. 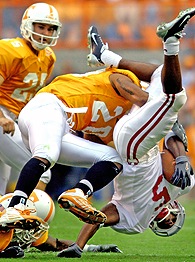 "It's just the third Saturday in October," Alabama junior guard Kyle Tatum said this week. "That's the game you dream to play."

When the No. 17 Volunteers (3-2, 2-1) come to Bryant-Denny Stadium to play the No. 5 Crimson Tide (6-0, 4-0), it will be the first time that Tennessee coach Phil Fulmer has set foot here since the controversy over his role in Alabama's NCAA probation.

"They got it out for us. We got it out for them. It's the same thing you get every time we play Alabama," Tennessee junior cornerback Jonathan Wade said. "It's not going to be any different this time. The hate might be a little bigger this time, though."

Fulmer has been vilified in this state for "turning in" Alabama during its NCAA troubles, mocked for refusing to set foot in Birmingham last year under fear of subpoena in a lawsuit filed by former Crimson Tide assistant coach Ronnie Cottrell, and disliked, most of all, because Tennessee has beaten Alabama nine of the last 10 years.

While the first two situations lit a fire beneath Alabama fans, it is the last one, the losses, that galls them most of all. Though Bryant-Denny Stadium may have been the loudest it has ever been three weeks ago, when Alabama defeated Florida 31-3, the general consensus here is that the Florida game sounded like the university's Gorgas Library compared to the din expected Saturday.

"There's a different buzz," Alabama senior quarterback Brodie Croyle said. "It's 50/50 on whether [the Tide fans would] rather beat Tennessee more or Auburn more. It's a bitter, bitter rivalry, especially with all the stuff that's gone on the last couple of years."

On paper, the Vols appear to be a big underdog. However, in this rivalry, there's rarely such a thing.

Two years ago, when Tennessee would finish the regular season 10-2, and Alabama would finish 4-9, the Vols needed five overtimes to beat the Crimson Tide, 51-43.

"They realize the tradition of this game, the magnitude of it," Alabama coach Mike Shula said this week of his players. "The younger guys who don't know quite a whole lot about it will find out in a hurry."

Shula, with his NFL background, is much more businesslike about the Tennessee rivalry than his predecessors, which comes as a relief to the players and athletic-department staff. The tradition during Tennessee week, begun under Bryant and continued by Gene Stallings, was to play the Vols' fight song, "Rocky Top," in the locker room all week long. And that's not all.

During Alabama's nine-game unbeaten streak that began in 1986, the team equipment truck had a crimson helmet painted on its front. Every year that the streak continued, the number on the helmet changed to correspond to it.

In the 1980s, during Tennessee Week, the team's training table served orange juice, orange grits, even orange mashed potatoes. On steak night, when the players usually got a baked potato, they got a baked sweet potato instead.

Alabama's obsession with Tennessee dated to Bryant's days as a player at Alabama in the 1930s. It was against the Volunteers in 1935, his senior season, that Bryant gained his greatest fame as a player -- playing with a broken leg against Tennessee. He had broken a bone in his leg the previous week against Mississippi State. The doctor took the cast off on Friday night so that Bryant could dress out.

The next day, in the locker room before the game, assistant coach Hank Crisp spoke to the team, as Bryant recounted in his autobiography:

"In those days they changed the players' numbers almost every week ... to sell those quarter programs.

Bryant played, caught a long pass on the opening drive, and Alabama went on to win 25-0. He finished his playing career 3-0 against Tennessee, which is significant because it would be the last time Bryant ever beat the Volunteers' legendary coach, Robert Neyland. In the seven years that Bryant's Kentucky teams played Gen. Neyland's Tennessee teams, the Wildcats went 0-5-2. All five losses were shutouts.

When Bryant returned to his alma mater as head coach in 1958, he went 16-7-2 against the Volunteers.

Tennessee's obsession with Alabama dates to the Neyland era. Until Neyland arrived in Knoxville, Alabama dominated Southern football. Once Neyland took over in 1927, Alabama and Tennessee took turns at the top for the next 25 years.

"You never can really tell about a football player," Neyland used to say, "until after he's played against Alabama."

"That was the game," Ray Graves, captain of the 1941 Volunteers and longtime Florida coach, said Thursday. "Alabama was the game General Neyland really pushed for. He believed that's the game you got to win if you want to be champions. He just made it that important."

When he played, Graves said, the players who practiced poorly served as waiters at the team's training table. The standards seemed tougher during Alabama week.

"The general gave orders and his assistants carried them out," Graves said. "If you didn't want to have to wait tables, you better play well."

In 1928, Neyland's second season in Knoxville, the Volunteers upset the Crimson Tide 15-13, a victory that began to build Neyland's reputation. When Fulmer spoke to his team about the Alabama rivalry, he described Gene McEver's touchdown run that led to that upset 77 years ago.

The Volunteers have won six of their last nine games against top-10 teams on the road. That statistic fits this rivalry to an orange T.

"Coach says it goes back to way before I was born," Wade said. "It's something you learn and it becomes part of you once you're here."