TUSCALOOSA, Ala. -- As victory piled upon improbable victory, as the defense refused to give up first downs, much less touchdowns, as their quarterback flashed his Hollywood smile, the Alabama faithful believed. Destiny remained a touchdown favorite over the reality of inexperience.

Alabama reached 9-0, No. 4 in the nation, No. 3 in the BCS Standings. The line in the fight song -- "Remember the Rose Bowl, we'll win then!" -- used to be a relic of the pre-war days. Not this year. Not this team. The national championship game is in Pasadena. The Crimson Tide kept finding a way to win. If they squeezed their eyes shut and looked hard, the fans swore they could see Fate smiling in their direction. 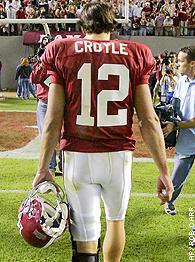 But there's a reason that seasons last 11 games. Makeup will cover those flaws for only so long. There would come a game when the opponent would be more talented, would be cool under big-game pressure, and Alabama would need more than its defense.

That game arrived Saturday, when No. 5 LSU came to Bryant-Denny Stadium.

Destiny is a wonderful idea, but it won't put groceries on the table. Nor did Alabama sign an exclusive contract for it. The Tigers have had problems. They had their lives torn asunder by Hurricane Katrina, their games made close by their own penalties and turnovers. Not only did they survive, they thrived.

LSU (8-1, 5-1) needed overtime to do it. JaMarcus Russell, a native of Mobile, threw an 11-yard touchdown pass to Dwayne Bowe to knock the Tide (9-1, 6-1) out of the national championship race, 16-13. The Tigers, with the victory, took control of the SEC West. Victories at Ole Miss and against Arkansas will put LSU in the SEC championship game.

When the Tigers fell behind 10-0 in the first 20 minutes of the game, they didn't fall apart. Alabama, which had gained more than 400 yards in total offense only once in its last five SEC games, gained 207 in the first half. LSU didn't back up. In fact, the Tigers sacked senior quarterback Brodie Croyle on the last two plays of the half.

"This team has character and grit," LSU coach Les Miles said. "Put them in a tough situation, they understand it."

Williams stood up in the locker room at halftime. He hadn't spoken to his teammates like this since last year, against Ole Miss. Williams implored the defense.

"I just told everybody that we weren't playing together," Williams said. "I challenged everybody to rely on one another. I felt like there had been some finger-pointing."

On the offensive side of the locker room, offensive coordinator Jimbo Fisher challenged Russell.

Russell arrived in Baton Rouge three years ago from this state with great fanfare. His learning has taken place on the field, and it hasn't always been pretty. In the second half Saturday, he showed what a good student he has become. For the first time in more than two seasons, this Alabama defense did not force a turnover.

LSU took the second half kickoff and drove 80 yards in nine plays. They held Alabama to a three-and-out, sacking Croyle again. They took advantage of good field position and in five plays tied the game at 10. Momentum didn't just swing LSU's way, it raced to the Tigers' sideline.

Most of the second half took place on Alabama's side of the 50. Croyle, trying to survive behind a makeshift offensive line, had no time to throw. Tailback Ken Darby, who rushed for 74 yards in the first half, had no room to run. Until the last play of regulation, when LSU just wanted to keep Alabama tailback Glen Coffee out of the end zone, the Tigers allowed Alabama a total of 24 yards after halftime.

Alabama coach Mike Shula sounded as heartbroken as the locker room he described.

That defense got Alabama into overtime. The extra period did for the Tide what it couldn't do on its own after halftime. It gave Alabama a first-and-10 at the LSU 25. The Tide managed a field goal.

Four plays later, Russell looked to his left, saw that Bowe was covered, and bought some time.

"I stared at the safety," Russell said, "to get him to bite on the tight end. I moved to the right, knowing there would be an opening."

Bowe found that opening in the middle of the end zone, half a step ahead of corner Charlie Peprah. Russell delivered the pass with timing and accuracy.

"He's been growing up all year," Fisher said. "He has brought us from behind so many times. His maturity as a football player and as a person, I couldn't be more proud of him. It's been coming every week."

So, too, has Alabama. The Tide got stopped Saturday by a team that wouldn't embarrass itself in the BCS championship game, should USC or Texas stumble in the next three weeks. Nobody wants to play LSU right now.

Alabama must find a way to regain momentum. Playing Auburn has a way of bringing focus to Alabama, even in the worst of seasons. This is anything but the worst, even if it felt that way in the shock of an overtime loss. The Rose Bowl, sadly, is just a lyric.