Texans may differ but only because, like most of the nation, they went to bed long before Bush finished having his way with the Bulldogs. If any college football fan east of the Rockies turned off his TV without draining his last can of Red Bull, he should be punished. 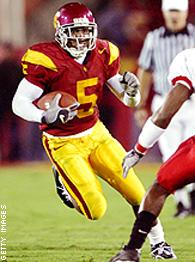 Come to think of it, missing Bush's 513 all-purpose yards, including 294 on the ground, is punishment enough, especially because No. 1 USC needed every single play Bush made in order to outscore No. 16 Fresno State, 50-42, Saturday night.

The Trojans (11-0) extended their winning streak to 33 games and their Los Angeles Memorial Coliseum streak to 26 games, but not without flirting with disaster again. Head coach Pete Carroll, also the defensive coordinator, sounded apologetic after his team gave up the most points it has allowed in his five seasons here.

The Bulldogs (8-2) combined a shrewd game plan, with outstanding special teams play and a nearly indomitable will. Unfortunately, they tossed five turnovers into the recipe as well.

No matter what Fresno State might have concocted, however, they never came up with an answer for No. 5 in cardinal and gold.

Bush gave a recital Saturday night. He danced on third-quarter touchdown runs of 45 and 50 yards. On the latter, as Bush sped down the left sideline, he saw Fresno State free safety Tyrone Culver angling in on him at about the Bulldog 25.

So Bush stopped. Culver flailed past him, looking like Wile E. Coyote sprinting off a cliff, and Bush reversed field, scoring near the right pylon.

"It was a little special something I was holding up my sleeve," Bush said with a smile. "They kept taking great angles and trying to cut me off. I remembered that."

That worked so well in the first quarter, when Bush raced down the sideline on a 65-yard run to the Bulldog 5, which set up USC's first touchdown. Poor Fresno State middle linebacker Dwayne Andrews had the angle on Bush on that run, and never laid a finger on him.

"They're a physical defense, but not the fastest we've seen," offensive coordinator Lane Kiffin said. "Certain teams are real fast. Then it's a LenDale [White] game. They [Fresno State] are physical, and if you run at them up the middle, it's not going to work. It became a 'Reggie plan' to get him outside. Then there were a couple of things where Reggie was in a good matchup."

Bush has a habit of showing up big when USC needs him the most, which is a handy trait to have come Heisman time. He gained 320 all-purpose yards and rushed for three touchdowns in the Trojans' 34-31 victory at Notre Dame five weeks ago. He left that game as the Heisman front-runner. But in four consecutive games -- four consecutive USC routs -- Bush did nothing extraordinary.

Last week, in a 35-10 victory at California, Bush gained only 86 all-purpose yards the entire game. Carroll called Bush into his office Friday to let him know that his number would be called early and often Saturday night.

"Don't force it. It's going to come to you," Carroll said he told Bush.

Before the third quarter ended, Bush had blown through the USC single-game all-purpose record of 368 yards, set by Anthony Davis in 1972, and the Pacific-10 Conference record of 384 yards set last year by Maurice Drew of UCLA.

Early in the fourth quarter, Carroll reminded Bush not to overdo it.

"He was telling me to hold onto the ball, and don't try to do something out of the ordinary," Bush said.

Bush not do anything out of the ordinary? On this night, you may as well tell Albert Pujols just to make contact. Carroll believes he took Bush out of his rhythm. Bush called the next play "a dumb mistake."

He fumbled a kickoff, and Fresno State needed only one play to convert it into a touchdown and a 42-41 lead. Bush and Carroll stood near midfield as the Bulldogs kicked the extra point to retake the lead.

"I told him I shouldn't have brought it up," Carroll said. "I felt bad that I did. I told him, 'What you need to do now is finish this game well.' He went right out and got a 15-yard penalty."

Bush got a personal foul for slapping a Fresno State player's helmet. Pinned back at the USC 11, Bush ran for seven, ran for 18 and caught a pass and took it 43 yards to the Fresno State 21. Six plays later, USC led for good.

"You've got to be in love with him after this one," Carroll said. "He just lit it up. He was an unbelievable football player tonight. Just flying. They [Bush's big plays] were spectacular. They weren't easy. He was roaring. He believes he can do anything. That invincibility catches up with you sometimes."

Bush is neither invincible or, to borrow one of the nicknames for his chief competition for the Heisman, InVinceible. But no one is more dangerous on any one snap than Bush.