Most players who leave early for the NFL leave behind fans disappointed that the player put himself before their team. After last Wednesday night, Vince Young could announce he was leaving Austin to join the French Foreign Legion, and Longhorn fans across the country would say, "Au revoir! Bonne chance!"

Let's face it: Young could leave Austin to join anything short of Al Qaeda, and Texas fans wouldn't begrudge him. 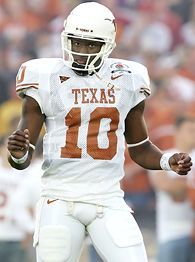 The guy with the suspect throwing motion is suspect no longer. That proves scouting remains more art than science, because Young didn't do anything in the Rose Bowl that he hadn't done all season.

Legend claims that the original Bevo mascot had that name branded into him as a coverup after Texas A&M pranksters seared the score of their 13-0 victory in 1915 into the steer. Texas historians dispute the legend, but Longhorn fans understand why someone strikes when the iron is hot. And no one in college football is brandishing a hotter iron than Young.

Young insisted over the last several weeks that he would not go to the NFL. That was before NFL personnel guys assured Young that he would be standing on a stage with NFL commissioner Paul Tagliabue early in the telecast of the 2006 NFL draft.

Young leaves Texas with 44 touchdown passes and 28 interceptions, 6,040 passing yards and 3,127 rushing yards. Young leaves, despite saying as recently as Thursday that he has a lot to learn, despite the belief by offensive coordinator Greg Davis that Young is not yet ready for full freedom at the line of scrimmage. Young will earn that freedom during NFL practices, not in college games.

Last, and most important, Young leaves with a 30-2 record as a starter. There's a statistic everyone can understand.

"The whole season, I was planning on coming back with my teammates," Young said, "but it's a one-time thing, so I'm going to take a jump at it while I can."

It is, as they say in Texas, a bidness decision.

Even though Young is leaving, 15 starters return to the Forty Acres next fall.

Trivia question: What do you and freshman quarterback Colt McCoy have in common?

Trivia answer: Neither of you has taken a snap for the Longhorns. McCoy is 6 feet 3, 195 pounds, and played at Jim Ned High in Tuscola, Texas (even some high schools have two first names in Texas.) Besides having a gunslinger's name, McCoy has a gunslinger's arm. He threw for 9,344 yards, fourth-highest in state high school history, and 116 touchdowns, and was a two-time all-state player.

"I see a smart quarterback, and a lot of hard work, a lot of hard work," Young said. "I've seen a great arm, as well. He's already gained the respect of the guys, and like I told him all year, that's the biggest key. You have to gain the respect of the guys and get them to believe in you. You don't have to make every play all the time, just be their leader and their quarterback. ... And, you have to take it upon yourself to do different things to learn the offense. He's been answering a lot of questions in meetings that when I was a freshman, I couldn't even answer."

Behind McCoy will be whoever signs with Texas next month. Jevan Snead, a 6-4, 210-pound star at Stephenville (Texas) High and the fourth-rated quarterback in the nation, according to Scouts, Inc., has committed to the Longhorns.

Texas coach Mack Brown found inner peace once he realized that Texas football is bigger than he is. He made the point Thursday that it's even bigger than Vince Young.

"No, we can still win football games at Texas," Brown said, "because we won them before Vince got here and we'll win them afterwards."

Speaking of bidness decisions, think for a moment about Ryan Perrilloux, the top-rated quarterback prospect in the nation a year ago. Perrilloux committed to Texas and changed his mind late in the game to sign with LSU.

A year later, Texas needs a quarterback, and Perrilloux is lodged behind JaMarcus Russell and Matt Flynn, who led the Tigers to a 40-3 victory over Miami in the Peach Bowl because Russell had an injured shoulder. Russell and Flynn will be juniors next season.

Perrilloux, too, made a bidness decision. Somehow, I think that Young's decision will pan out better.