MOBILE, Ala. -- It might have been the moment when Norm Chow told the North quarterbacks to throw with their feet that they realized this whole NFL thing is going to be harder than they had thought.

Jay Cutler of Vanderbilt, Michael Robinson of Penn State and Charlie Whitehurst of Clemson made it to the Senior Bowl by combining to throw for nearly 22,000 yards and 131 touchdowns, accounting for every single throw with their arms. They could have sworn, having watched the NFL all their lives, that the quarterbacks on Sunday throw the same way. Two days into their pro career, and they have to throw with their feet?

Next on Sunday NFL Countdown: Punting with Your Head.

"Every single pass," Cutler said. "We never thought much about our feet. We thought about where we were throwing the ball. All the time in practice, we're thinking about our feet." 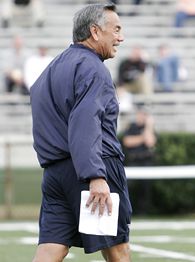 In a college football career that lasted more than three decades, Chow, the Tennessee Titans' offensive coordinator, groomed three Heisman Trophy winners --Ty Detmer at BYU, Carson Palmer and Matt Leinart at USC. If you're a quarterback, getting to work with Chow for a week is like getting Clint Eastwood to teach you how to squint.

Like feet. One of the lessons Chow and Titans quarterback coach Craig Johnson gave their quarterbacks this week is that, as they go through their progressions -- football-speak for looking at their first, second and third receivers -- they should move their feet into position to make each throw.

"I want to just go through the progressions with my head," Robinson said. "You got to be ready to throw. If you got to throw at the last second, your feet may be doing this" -- Robinson splayed his feet -- "and your arm is throwing over here [to his left]."

There are a million little pieces that go into playing quarterback in the NFL, and Chow and Johnson spent the first part of the week in a quandary about how many to serve their three quarterbacks. Chow made the conscious decision not to watch video of them before he arrived in Mobile.

"I didn't want to form any opinions on them before I got here," Chow said Monday evening. "We got reports on them from our scouts, but I did it this way just for me, so I can give an honest evaluation of what's going on."

The mechanics of coaching the Senior Bowl are numbing. The coaches must install a rudimentary playbook, devise a way to shoehorn 25 offensive players into a 60-play game for equal amounts of time, and try to begin to teach the skills that define the difference between a college all-star and an NFL player.

It wasn't until Tuesday that Chow found time to sit down with each quarterback for a one-on-one tutorial.

"We've emphasized what we're going to do this week," said Johnson, who has coached Steve McNair for four years, including his co-MVP season in 2003. "The only thing Norm and I have tried to teach is that, 'This is the stuff you'll need this week, and then this is what you're going to need for the future.'"

Johnson is referring to the Senior Bowl's rules banning blitzes, which simplifies the dissection of the defenses the quarterbacks will see Saturday. The NFL doesn't ban the blitz. Not by a long shot.

"Don't be fooled," Johnson said. "Don't get too confident, thinking, 'This is not too hard. This game is not so tough.' There are so many variables. The big difference for a young quarterback in this league is that everyone is so good  Seventy percent of the plays do not happen like you draw them up. Decision-making time is cut. Everybody tells you to throw the ball here. The guy is not open. What do you do next?"

On Tuesday at 8:15 a.m., Chow met with the quarterbacks, backs and receivers. He wrote on the board in the front of the room:

As Chow continued, he hit on each of the points on the board.

"Concentrate on what's going on," Chow said. "Execute what we ask you to do. Big-time players make big-time plays. Finish. Pick up the tempo so that when Saturday comes, you're not, 'Oh my gosh! I have to go faster.' We're not going out there to goof around and be on TV. We're going out there to win the game."

The truth is, no one looked good Monday. 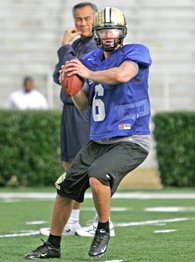 As Chow sat at the laptop, punching up video of Monday practice, Johnson and the quarterbacks sat in the front row. Chow would speak to the offense, and Johnson would murmur quietly to whichever quarterback was on the screen.

After Cutler overthrew a receiver, Johnson said, "Your shoulders were a little high."

A few plays later, the X receiver -- lined up wide left -- ran a quick out pattern. Chow got on Robinson for not delivering the ball quickly enough.

"One, two, three, open, throw!" Chow said. "See him at the top of his route [the moment before the receiver makes his cut]? The ball should be out already. The corner will eat that thing up."

Chow made the point to all three of them.

"Corners are fast. You've got to get the ball out quick," Whitehurst said. "That's the jump."

The meeting might have lasted only 30 minutes, but it must have seemed like a month to the quarterbacks. Afterward, as the players filed out toward the bus for morning practice, Chow said, "Cutler's a really talented guy. He has to be consistent with his technique. On one play, he was supposed to drop five steps and throw the ball. He dropped seven. That screws the timing all up."

Sure enough, practice Tuesday went more smoothly. Cutler, in particular, showed off a live arm. He can zing the ball from the hash to the opposite sideline, and in a hurry.

"It's just new plays, new terminology," Cutler said Tuesday. "They want to have upbeat and intense practices. It's hard for us to get time to think and know what we need to do. Today, we got used to the play calling and got a better feel."

On Wednesday morning, Chow and Johnson met again with the three quarterbacks. They discussed the playbook, what to look for from the South defense, and how that will differ from the NFL defenses they will see in the fall.

In particular, the coaches focused on "Tampa 2," the scheme popularized a few years ago by the Buccaneers. The defense is designed to look like a Cover 2 scheme, with two safeties deep. In reality, the middle linebacker drops back and covers the middle of the field and the defense is playing cover-three. 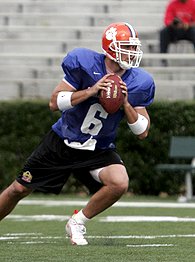 "When Tony Dungy first put in this coverage," Chow, standing at the greaseboard, told his quarterbacks, "everyone said, 'Cover 2. Let's attack it.'"

Chow showed them what happened as the linebacker dropped into coverage. What looked as if it should be open disappeared.

"I coached with [Bucs defensive coordinator] Monte Kiffin's son," Chow said, referring to his days at USC with Lane Kiffin, whom Pete Carroll promoted to succeed Chow last year as the Trojans' offensive coordinator. "We called and asked, 'What would beat this coverage?' I made sure we had it for UCLA. They ran it. That's why we beat the heck out of them.

"You have to understand this coverage," Chow said. "It's not as easy because of the skills of these guys [middle linebackers]. It's unbelievable how athletic they are."

Chow and Johnson discussed all aspects of the Tampa 2: the role of the safeties moving outside to patrol the deep ball, the way the outside linebackers will cheat toward the middle once the middle linebacker drops and where to find the holes.

"Norm is so cerebral," Robinson said. "He's all about philosophy and really making the right read. They do a good job of teaching mechanics, but they focus on the reads."

Chow doesn't excite easily. Johnson puts more emotion into his teaching. When Chow left the room, Johnson went over a script of plays with the three quarterbacks. On each play, he would ask a quarterback on which defensive player should he key.

Over and over, in several different ways, Johnson told his players not to eyeball the receiver they wanted to target.

On one play, Johnson said, referring to the tight end, "I know I have Y. I'm not going to look at Y. If I look at Y, the Sam [strong linebacker] is going to squeeze me. I take my eyes down the field."

For most of the meeting, Whitehurst sat back in his chair, right leg at a 90-degree angle across his left knee, propping up his playbook. Cutler -- who, judging by heavy lids and a slow gait, isn't much of a morning person -- had his arm draped across the back of the chair next to him.

By the end of the meeting, both players had two feet on the floor and were leaning forward, forearms on knees.

"Michael is an athlete who has played a number of different positions. He has shown he can lead the team. If guys are looking for a run-pass type, he has been accurate enough and has made big plays in big games. He's going to have to find a team that likes that role. That's the way he'll make it in the NFL. [Seahawks backup] Seneca Wallace made a catch in a playoff game.

"Charlie is the son of an ex-NFL player," Johnson continued. "He's got a very good makeup. He understands the small details. He's been in a lot of quarterback meetings. He's got a lot of skills. He had three different offensive coordinators [in three years]. He learned three different verbiages. He came in here and learned things at our level. That's as big as arm strength." 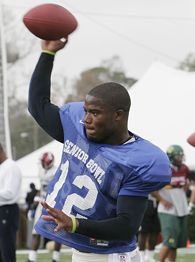 Robinson missed the last 10 minutes of the meeting to do some quick remedial work with wide receivers coach Ray Sherman. Robinson is in an awkward position. He alternated between quarterback and wide receiver until his senior season, when, as a quarterback, he blossomed into the Big Ten Conference Offensive Player of the Year and finished fifth in the Heisman Trophy vote. Some teams want to see Robinson at wide receiver. He said he wants to do whatever will get him onto a roster.

"The scouts want to see me do other things," Robinson said. "When I asked Norm about it, he said, 'Mike, you're a heck of a quarterback. I kind of shy away from doing that.' That made me feel good."

Chow didn't finalize plays for Robinson at receiver until Wednesday morning. They were scribbled on the back of a sheet of paper. He didn't look lost as a wideout Wednesday afternoon, and he returned a couple of kicks, as well.

Presumably, Robinson will catch with his hands. But this is the NFL we're talking about. You never know.

Since the Senior Bowl is the first stop in the three-month draft season, the game itself might be the least important part of the week for the NFL. Most of the personnel executives will be out of Mobile by Thursday morning. Good performances can propel a player high into the draft. On the other hand, Chow soothed his quarterbacks with a bit of trivia. Three years ago, one of Chow's prize pupils, Carson Palmer of USC, went 1-for-7 in the Senior Bowl. He went on to become the top player selected in the draft.