FORT WORTH, Texas -- It can last fewer than 30 minutes and rarely more than 45, and coach Gary Patterson believes it is the most important winter conditioning drill that the TCU Horned Frogs perform. Every Wednesday, the players gather on the FieldTurf practice field at 6:30 a.m. and go through a seven-station agility drill known as the Colorado Circuit.

To break it down further, in those 30 minutes or so, the Horned Frogs spend about five minutes in warm-up calisthenics. They spend about two minutes at each station. In fact, the players actually exercise at only six stations. What could the players achieve in so short a time that could be so important? Not strength. Surely not endurance. 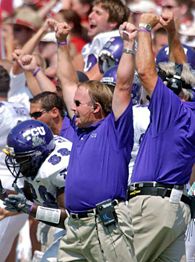 The answer is measured at every stop on the circuit. The answer even has its own stop. The seventh station on the circuit is the "enthusiasm station." Patterson, who is to exuberance what Tom Osborne was to stoicism, demands that his players show how much they are enjoying the work.

Even as they hate every step.

"That's mental toughness right there," Patterson said. "It's really not made to condition you. It's to prepare you mentally to get stronger, to work through it when you get tired."

The criteria by which Patterson judges success is calibrated only in his head. He wants to hear woofing, cheering, yelling, screaming. He wants to see it at each station. He wants to see it at the enthusiasm station, which he oversees at midfield. The players sprint to him, and they better be dancing and chanting. If he doesn't approve, he adds another station stop to the workout schedule.

Whatever you call it, it works. The Horned Frogs, picked to finish sixth in their debut season in the Mountain West Conference, went 11-1 and finished ninth in the coaches' poll and 11th in the AP. They won twice in overtime, twice more by a field goal, and stunned a supposedly bigger, stronger Oklahoma in the season opener, 17-10. After that game, Sooners coach Bob Stoops questioned his team's physical play, toughness and attitude. At TCU, that was taken as a tacit declaration that the Horned Frogs had been stronger and tougher.

"The circuit doesn't guarantee you any success," senior wide receiver Michael DePriest said. "It just gives you a chance. When we had to go to overtime, we knew we had been through things like this. When we're tired and beat down, we know we've done it in the offseason."

It is Patterson's belief that his players remain strong and tough because they don't surrender to being tired. That's why he wants enthusiasm. That's why he demands that the excitement be contagious. That's why, when the players emerged from the locker room in the predawn darkness last Wednesday, they didn't care about anyone sleeping soundly in the apartments on the other side of the practice field.

One player howled at the full moon that still hung high over nearby Amon Carter Stadium. As the team lined up on the goal line, some players chanted, and most jumped up and down.

"If everybody is hungry, you might end up doing only four of seven [stations]," strength coach Don Sommer said. "Other days, you might do nine or 10. It's all about being mentally tough, mentally strong, whipping that guy's butt all over the field. If you have to win through attitude, so be it. It's better than fighting tooth and nail."

Sommer breaks down each of the six exercise stations in the circuit for his players as soon as they return from Christmas break. The rest of the week, the Horned Frogs run and lift in groups. The only time the entire team works out together during offseason conditioning is on Wednesday mornings. The difference in intensity between what Sommer explains and what the players experience is like a cold shock of water to the face of the youngest players. 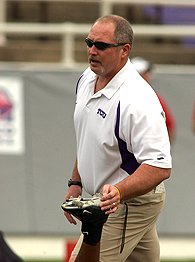 "You don't know what's involved until you get out there and don't do it," said Jason Phillips, a second-team All-MWC linebacker as a redshirt freshman last fall. "I couldn't tell what it meant until the season began. If you get down, and you start jumping up and getting excited, I realized that's how it goes into our effort."

Taylor, an All-MWC tackle, remembered his first thought at the conclusion of his first circuit: "No way possible I can do this for five years."

The toughest stop on the circuit is the "Pat and Go." Sommer sets eight cones at 45-degree angles from one another over 15 yards. The players lower their hips and sprint to a cone, and when they get to it, stutter-step around it. When the group finishes, it turns around and goes back to the starting line.

Woe be unto the Horned Frog who isn't yelling and clapping. The point, of course, is that said Frog has to be able to perform the work and still have enough oxygen left over to impersonate a teenage girl at an Usher concert.

"Gentlemen, we're going to add stations if we don't get talking!"

If he didn't like the effort expended, Patterson added seconds to a stop. When each position group had been to every station, Patterson called the team together, chastised them and added another station. Nothing changed. He looked over at the defensive linemen.

"I got guys in the back of the line who are not saying anything," he said. "You gotta do things when you're tired. You got to train yourself."

Patterson blew his whistle and waved the team to another extra station. The Horned Frogs, their gray T-shirts soaked, responded as if he had given them a week off. That's exactly what the head coach wanted. The noise continued to rise. It was 7:05 a.m. The sky in the east had grown pink, and the reflection in the western sky colored the moon.

The defensive linemen left their station and danced and hollered as they ran over toward another position group. Suddenly, the whole team coalesced at midfield. Some players sang, "Hey! Hey! Hey!" Others did a call-and-response:

Patterson blew his whistle and asked his players to take a knee.

"I was ready to go to another station," he told them.

"If you think you win championships because you go through a drill," Patterson said, "that's not the deal. If the enthusiasm next week starts like it did today, you'll go through the circuit twice. It takes effort to win games. It's easy to be 6-5. That's not what we do this for. We do this to find out who can get motivated when the team is tired. There were times when you were good. But like a ball game, you got to play four quarters.

"A year ago, when we were 5-6, you didn't like that feeling. How do you handle success? How do you handle being 11-1? Do you think it was easy? Or do you come back and do the things that won us a championship? That won two overtime games? Do we get better, stronger and faster? Maybe. It's more about chemistry, more about getting better, more about getting here on time. Those are the things that we do on Wednesday morning.

"We were down 18 points in the third quarter at BYU, and we never quit [TCU won 51-50 in overtime]. Utah had us down 10 points over here and we fought back and got into overtime [TCU won 23-20]. That's what this morning is about. It's to find out who we are. Was it bad? No. Actually, it was pretty good. Is that what you're looking for? That's the question you have to ask yourself."