NORMAN, Okla. -- If you set out to find the cutting edge of strength training, it would make sense to start at the University of Oklahoma, where Jerry Schmidt, a Harvard man, has the job title (director of sports enhancement) and the reputation that make it clear he is the 500-pound bench press of strength coaches. 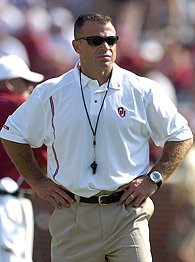 Schmidt's laboratory is the Everest Training Center, the hangar-sized indoor football facility up the street from Oklahoma Memorial Stadium. That's where Schmidt has the gadgets that make him Q to Stoops' James Bond.

"Look at how innovative he is," Stoops said. "He's always looking for better and more efficient ways to train. He's so dedicated to that."

Bolted onto one sideline wall of Everest are Keiser air pressure machines that resemble gas pumps. Tethered to them are belts that can be pneumatically pressurized by the pumps. The players strap on the belts and, with their hands clasped behind their heads, perform a set of jumps straight up into the air.

"The air allows us to do things that are more explosive," Schmidt said. "Weight stacks don't allow you to do that."

Behind one end zone, just off the ground, are several sailboat pulleys with bungee cords attached to them. A player hooks himself to the bungee cord and performs a series of running and change-of-direction drills. The resistance, Schmidt said, trains the player to move faster than he knows how.

"That teaches him to come off the ball faster," Schmidt said. "What you're teaching your body to do is move faster. A guy who runs a 4.8, we run him at 4.6 with the cord. Pretty soon, he's keeping up with the cord."

There are 10 hurdles, five low and five high, set up in alternating fashion a yard apart. The player, standing perpendicular to the hurdles, swings his lead leg over a low hurdle and ducks his entire body under the high hurdle. If he doesn't get through the hurdles in seven seconds, he hears about it.

If there's a contraption or a drill out there that will make a Sooner stronger and faster, Schmidt knows about it. But less than halfway through a two-hour conditioning session that began at 6:20 a.m. on Valentine's Day, it becomes clear that Schmidt is as cutting edge as a butter churn.

On the last drill the Sooners perform before they go into the weight room to lift, the players pair off and lie down, feet-to-feet, in sit-up position. One is holding a 12-pound medicine ball behind his head. When a coach blows his whistle, the player must do a sit up and toss it to his teammate, who catches it, raises up and tosses the ball back as the first player returns to the prone position.

Back and forth is one rep. The whistles don't stop until they reach 50. The players rest for a minute, and they do another set of 50. When they look sloppy, or slow, or otherwise don't meet the unwritten but understood standard set by Schmidt, the Sooners do another set of 50. And, on rare occasions, another.

They learn quickly that it's smarter to meet the standard.

"The first time I did the medicine ball, I cramped up in my neck," senior linebacker Rufus Alexander said. "I didn't think I could cramp up in my neck."

Schmidt loves the drill because it promotes flexibility, shoulder strength and hand quickness. But he really loves it for the strength it develops between the ears. Inside the Roy Williams Strength and Speed Complex, the weight room named for the Dallas Cowboys' safety and former Sooner All-American who donated $100,000 to outfit it, Schmidt's slogan is painted prominently along one wall.

What that slogan doesn't tell you about Schmidt, the Harvard diploma will. It's from Harvard High School in Harvard, Neb. How a guy rises from a town of 998 people to the pinnacle of his profession explains the secret to his success better than any training regimen.

"The year we won the national championship," Schmidt said of the 2000 Sooners, "as a team, we didn't have much talent, but they worked hard every day. There wasn't anybody who let up."

Last season, an Oklahoma team with very few seniors opened the season by losing 17-10 to TCU, a team with less talent than the Sooners. From a midseason nadir of 2-3, the Sooners finished 8-4, closing the season with a 17-14 upset of No. 6 Oregon. Oklahoma had begun to learn how to work hard.

Stoops, a former two-time All-Big Ten defensive back, is still in good shape, even as he has eased out of running and into swimming as a concession to his 45-year-old hips. Stoops has not asked Schmidt to develop a workout regimen for him.

"If he did," Stoops said, standing on the field at the Everest Center, watching his players work, "I'm afraid he'd make me live up to it."

Stoops, asked why he brought Schmidt with him from Florida, said, "As I watched him, and how he trained people, I loved his discipline and how demanding he is."

The role of strength coach has evolved in response to NCAA rules adopted in the early 1990s restricting offseason work. Division I limited spring practice to 15 sessions but allowed strength training virtually year-round.

"It's fair to say he's with them more than we all are," Stoops said of Schmidt. "He's with them every single day this time of year. We're not allowed to coach them. He's teaching them to be a better athlete. He gets more time with them. He isn't offense or defense. They look at him different. He works with everybody. He's my first lieutenant to the guys. They know I feel that's one of the strength points of the program. They know he's the guy. I don't have to be hands-on. He is."

Senior defensive end Larry Birdine made it to 13 in the second set of medicine-ball sit-ups when he careened out of the group and fell to all fours, spent. Birdine violated a couple of Schmidt's cardinal rules. He didn't finish the drill. And when not exercising, he didn't stand.

"Stand up, Bird!" Schmidt commanded. He walked over and lifted him up.

"I just throw them out," Schmidt said, "and they have to go back and do it. Part of being a team is that everybody is doing the same thing. A player will have to come in with another group."

Senior defensive end C.J. Ah You bent over at the waist between gassers, those down-and-back sprints across the width of the field that served as the final drill in the two-hour workout. He didn't sit. He didn't lie down. He bent over. Ah You might as well have slept in and missed the workout.

"Get his ass up!" Schmidt yelled.

"C.J. needs to be a better leader," Schmidt said. "That's just a sign of weakness. If I'm an offensive coordinator up in the box and I see a corner with his hands on his hips, I'm going to go at him every time. That's a guy who just can't handle it mentally. Those players are out on their feet. You get a defensive end doing that, you go right at him. He can't make a play."

Said junior tight end Joe Jon Finley, "He's just a no-nonsense type of guy. If you come in, work your butt off, he'll be a great guy. If you don't take care of yourself, and you're kind of falling behind, he's going to let you know. He'll just tell you straight up. I've had a couple of those from him. They were effective."

That intensity stays with Schmidt's players long after they leave him. The other day, Stoops got a phone call from Philadelphia Eagles defensive end Jevon Kearse. The Freak, who played for Stoops and Schmidt at Florida, wanted to know if he could come to Norman for a few weeks to work out.