UNIVERSITY PARK, Pa. -- You would think, in the comfort of the Penn State players lounge, a room decorated in classic collegiate male -- couches, foosball, billiards -- that Nittany Lions linebacker Paul Posluszny could discuss the play that ended his 2005 season without emotion. Five weeks had passed. The sprained ligaments in Posluszny's right knee had decided to be his friends again. He knew his story would have a happy ending.

But sitting in a big, dark room, backlit by winter sunbeams pouring in through the windows, Posluszny all but squirmed in his seat as he described what he has gone through. 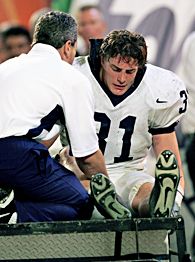 "Two little ligaments in your body, if they go wrong, can have a huge impact on everything else," Posluszny said. "It's been a very humbling experience."

From the waist up, he still looks like the best linebacker in college football, the 6-foot-2, 229-pound, Butkus Award winner and Academic All-American who led Penn State to an 11-1 record and a No. 3 ranking. From neck to sternum, muscles are piled atop one another like meat in a Carnegie Deli sandwich.

Underneath his right pant leg, however, Posluszny wore a small black brace over his knee. On a blitz in the fourth quarter of the Orange Bowl, Posluszny suffered sprains of his medial collateral and lateral collateral ligaments when he tried to leap over a block by Florida State tailback Lorenzo Booker. If knee injuries were car accidents, Posluszny suffered a fender bender. His rehabilitation would be measured in weeks, not months.

It's easy to minimize when it's not your knee. The fact is, Posluszny opened the door to his football mortality. He slammed it shut, but he's having trouble getting what he saw out of his head.

"I finally came to grips with it. This happened for a reason. I'm very religious. God did this for a reason, not to punish me, but to provide me with a new challenge. In the end, everything will be just fine. I have to work a little bit harder."

By the second week of February, Posluszny's limp was barely noticeable. That's when Penn State and Posluszny allowed me to watch as he went through his rehab session in the Nittany Lions' training room.

"He's got a job to do and he's going to get it done," coach Joe Paterno said of Posluszny's rehab. "He's going to do it intelligently and not do anything stupid. That's the way he is on the practice field and on the field. He knows what to do and he does it. Frankly, he is just itching to do it."

To say the least. For two weeks after the accident, Posluszny got around on crutches, his right leg encased in a thigh-to-ankle brace. He felt so humiliated that he left his apartment only to go to class, to eat at the training table, or to rehab.

As recently as five years ago, according to Penn State trainer George Salvaterra, it took a player with an MCL sprain 10 to 12 weeks to get back on the field. That recuperation has been shaved by a month. Doctors used to immobilize the knee and wait for the swelling to dissipate. Now they have discovered the importance of mobilizing the knee to prevent adhesions, which are formed by bleeding and the development of scar tissue that causes the ligament to stick to other tissue in the knee.

"Early on, the movements were so simple," Posluszny said. "I would be sitting on a table. They would put sandbags on my leg and I would have to lift my leg. It was very monotonous. You get tired of it real quick. If you could do 20 reps, they would put more weight on and you do 20 more reps."

For this workout, Posluszny got to the locker room around 2 p.m. He had lifted weights that morning, after he helped lead the team's 6 a.m. workout. Posluszny, as a team captain, directed the Nittany Lions as they stretched. When they began their conditioning drills, he retreated to an exercise bike.

No one thought twice about it -- except Posluszny. He didn't even attend the team's first two 6 a.m. workouts.

Ron Vanderlinden, Posluszny's position coach and his confidante, pulled him aside. 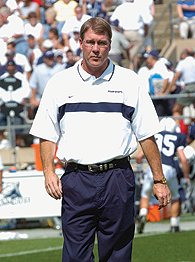 "You're a captain, and this is a young football team," the Penn State linebacker coach recalled telling Posluszny. "Paul, don't be afraid to be vocal, even though you are on a bike. They listen to you. They respect you."

So Posluszny does it. But he still feels as if he's cheating his teammates.

"I like to lead by example," he said. "Not being able to do that really hurt. It was tough to deal with. Everyone else is working hard and getting better and doing football-related drills. I was there on the stationary bike, just riding."

It is that kind of selflessness that endears Posluszny to Penn State, and will serve him well in a year, when he goes to the NFL. His knee injury made it impractical for him to leave this season. Posluszny said he had all but decided to return, anyway.

He began his rehab session with 10 minutes on the Cybex Fitron exercise bike, followed by three different stretches of his right hamstring and calf. Then he moved to the Westway treadmill, where Salvaterra monitored him.

Monitored is such an antiseptic word. Put it this way: A hawk would need Lasik surgery to watch as closely as Salvaterra watched Posluszny.

In his 19 years at Penn State, Salvaterra has earned a Ph.D in health education.
Salvaterra takes his training room seriously. He takes everything seriously. He smiles about as often as JoePa wears black socks.

"What you're looking for," Salvaterra said, "is heel-toe pushoff. You go through the treadmill to make sure they get good heel-strike."

Heel-strike, in this case, is not what happens when Barry Bonds has an 0-1 count.

"You speed it up and slow it down to see if they can accommodate the change," Salvaterra said. "If they get off their foot quick, you'll see a little hop. If you don't clear it up when they walk, it gets complicated to clean up when they run."

Posluszny began at 3.5 miles per hour. He increased the pace to 3.9 mph. After 10 minutes, he gradually raised the incline from zero to three percent.

"When he starts walking fast, he has a footslap," Salvaterra said. "That's just him. When you walk, you have a compensatory motion in your upper body. You check for shoulder height, arm swing."

So, I said with mock disdain, "I hear you're a footslapper."

"That's just my body telling me I'm OK to run," Posluszny replied. "I guarantee you I could easily pick up and run."

Five weeks into rehab, Posluszny took everything that happened to him and found some sign that he should begin running. If he went home and found his toilet running, he would thank the plumbing gods.

Salvaterra walked over and increased the incline to two percent.

"Hop up to the front of the treadmill," Salvaterra said.

Another athlete came in with a broken thumb. Salvaterra walked away to tend to him.

"The only thing that hurts is my shins," Posluszny said. "Once again, that's my body telling me you should start running instead of walking fast."

The temptation became too great. Posluszny, used to driving a Ferrari, had had enough of living at golf-cart speed. He took off.

Damn that footslap. Posluszny's run to daylight lasted three steps. From the back of the training room, Salvaterra gave him a verbal finger wag. "Uh-uh-uhhhh," the trainer said.

"Just moving up to the front," Posluszny said.

Posluszny looked at me.

"You gotta let me know when he's behind me," he said.

After 20 minutes of -- sigh -- walking on the treadmill, a small semicircle of sweat has appeared at the base of Posluszny's sternum.

"That little bit of incline makes it tougher," Salvaterra said.

"Your sweat is giving you away," Salvaterra said.

Posluszny moved to the StairMaster FreeClimber 4400 PT for a total of 10 minutes, at three increasingly difficult settings. The machine forced Posluszny to shift weight load from one leg to the other.

"Anytime anyone has any kind of ligament stress, you want them to get airtime," Salvaterra said. "He has to make impact again. That's what you want to have happen. The toughest thing for anyone to regain after ligament damage is to get airborne, land and regain body position."

Posluszny then did a series of balance exercises either on a board or on the flat side of a Bosu ball. He stood, knees bent, inches from a wall. Salvaterra stood behind him and pointed a flashlight over one of Posluszny's shoulders, or over his head. Posluszny tapped the light on the wall while maintaining his balance.

That concluded the land portion of the rehab. Posluszny put on water shorts and walked into an adjacent room with three therapeutic pools: one hot, one cold and one built for water exercise. He donned a buoyant vest, attached a line from the vest to each end of the pool, and floated in seven feet of water. He would run 16 30-second sprints in the water, separated by 30 seconds of rest.

By the third sprint, the water is angry. To combat boredom, Posluszny said, "I picture myself running 110s, the length of the field. Either that or I'm chasing someone."

After six sprints, Posluszny began to huff and puff. Whitecaps appeared on the water in the pool. When he reached the 16th and final sprint, Posluszny, one eye on the digital timer at poolside, ran 35 seconds. It was no accident.

"Yeah," he said. "You got to finish stronger than you started."

He got out of the pool and prepared to immerse himself in the cold pool, which stays at 40 degrees. Salvaterra explains that the temperature and the pressure of the water will be good for his player's tired leg. Posluszny depends on it.

"On the bowl trip," Vanderlinden said, "he would fill his tub with cold water and make 15 trips to the ice machine."

Posluszny is expected to be cleared for full participation in spring practice, not that his coaches will allow it. They want to save him for his senior season, when he will lead a defense that returns only four starters. Salvaterra is not a man given to gushing. But when he speaks about Posluszny, Salvaterra sounds like James Lipton introducing one of his cinematic lovefests.

"I can't express to you how important the kid is to this program in taking us from where we were to where we are," said Salvaterra, referring to the four losing seasons in five years prior to 2005.

"He's amazing. He's a great kid. It's so valuable to have a kid like that. So courageous. So determined. Doesn't shy away from anything. Does well academically. He does everything you ask him to do. He's so valuable. Those kids are rare. Rare. We've had them here. They take groups of kids with them. As soon as they step on campus, you know it."