BOULDER, Colo. -- In Dan Hawkins' mind, what concerns him about the Colorado he found when he took over the Buffaloes in December is not the two-year war of attrition that took the jobs of the athletic director, the university chancellor and, finally, Hawkins' predecessor as football coach.

It is not the allegations of sexual and alcoholic misconduct that set off that war. It is not the financial problems the athletic department has endured, not even the self-imposed recruiting restrictions Colorado adopted in the wake of the scandal, rules so parochial-school strict the Buffaloes might as well be a Prius in the Daytona 500 race for signatures. 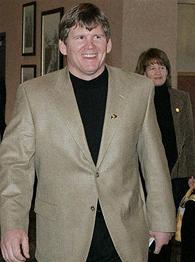 Hawkins arrived from Boise State with eyes wide open. He knew all that stuff. What captures the scale of the hill Hawkins must climb in Boulder are the long, gray, diagonal scuff marks on the back of his office door.

Hawkins' office on the second floor of the Dal Ward Athletic Center looks like prime coaching real estate. The window looks out over the end zone into Folsom Field. But the darkly wooded bookcases on two walls are barely filled. It's as if Hawkins can't bring himself to move in until he takes care of those scuff marks.

"This [office] was state of the art when Mac built it 15 years ago," Hawkins said, referring to former coach Bill McCartney. "These guys had just won a national championship. See the scratches on the door? It's all little stuff, and it all matters."

Take care of the little stuff, and there will be no big stuff. It worked for the NYPD, which reversed the Big Apple's escalating crime rate by going after the turnstile jumpers in the subway. Take care of the guy who breaks a window, and he won't become the guy who wields a gun.

That's what bothers Hawkins about what he found in Boulder. The price the football program has paid for the scandal is that no one has taken care of the scuff marks. The fact that they are there, and went unnoticed for however long they have been there, is a sign of mental flabbiness. They are, in Hawkins' mind, unprofessional. This is a guy who drops MBA buzz phrases such as "force multiplier" and "change agent" into a coaching conversation. You can bet Donald Trump never had scuff marks on his door.

Colorado has had other priorities in recent years: lawsuits, investigative commissions, protests, you name it. Meanwhile, the rest of college football attended to its arms race. In the Big 12 alone: Texas A&M moved into a new football building; Nebraska redid its stadium; and Kansas is spending $31 million to modernize -- Kansas, for heaven's sake.

Then there's Colorado, still talking about building a bubble over its practice field, a plan that first surfaced when Pike went looking for his peak. Why bother with a bubble? The artificial turf on the practice field looks as old and worn out as Barnett did when he agreed to resign after the catastrophic end of the 2005 season.

Barnett fought off the reformers who came after his job, but the last three years polarized the campus so that all Barnett had to stand on was his ability to win games. When the Buffs closed last season by losing 30-3 to Nebraska, then 70-3 to Texas in the Big 12 Championship game, Barnett had nothing to break his fall. The typical coach looked at Boulder and said, "There but for the grace of God go I."

Hawkins looked at Boulder, scuff marks and all, and said, "There I go." For all the Trump there might be in Hawkins, it is trumped by the do-gooder in him. He is straight out of a John Mellencamp song, a small-town boy from far northern California with big dreams. Four times in a 45-minute conversation, he prefaced a comment by warning he might sound corny. But he believes what he is saying.

Actually, that's exactly how Gandhi and King won their battles, by taking a knee. But tell the fact-checkers to pipe down. Hawkins is on a roll.

"I think, 'OK, if I can come over there to Colorado, and put all this stuff together,' I mean, we can be more than football," Hawkins said. "There can be -- you know, diversity issues improved, gender issues improved, academic relations improved, and you can at least feel like, 'Hey, I really made a difference for a whole institution,' and not just, 'We won more games.'"

Hawkins isn't chasing the Big 12 Championship or the Fiesta Bowl. Not outright, anyway. Hawkins is chasing excellence. He just chooses to do it via the avenue of football. After five seasons at Willamette in the NAIA and five years at Boise State, he has a career record of 93-22-1 (.806). He will take suggestions from wherever he can get them, which surely makes him the first football coach to quote "Zen in the Art of Archery" and longtime NFL coach Chuck Knox's autobiography in the same lifetime, much less the same conversation.

"Kids are totally more open to it," said Hawkins, sitting in his office, his back to the door that bothers him so. "Coaches will go, 'Huh?' These are guys who are saying, 'Can you teach me how to score in the red zone?' 'How do you protect against the zone blitz?'"

"I have heard a lot of different offenses, defenses, combinations," he continued. "Trust me. That's not it. A quote I use a lot is out of 'Zen in the Art of Archery': 'Seek not the target but rather to be the bow.' What? Be the bow. They get it. Become the vehicle of excellence. It has nothing to do with football. I get that door fixed. It's a detail. That's a big thing. If they come here to be the vehicle of excellence -- sportswriter, coach, athlete, computer engineer -- it's all the same. Then you see the light come on. That's the real awesome thing. They get it."

Colorado could use some excellence. The players, who stuck with Barnett to the end, are as publicly mystified by the crash at the end of last season as anyone. To a man, they don't analyze much past, "We didn't finish." They like Hawkins when they talk about him. They like him on the practice field, where he doesn't go to the verbal whip nearly as much as Barnett did.

The Buffs have to run one gasser for every turnover in a practice. At the end of the spring's second practice, in which the Buffs coughed it up three times, Hawkins put three offensive linemen downfield as punt returners. For every punt they caught, they could earn back a gasser. The linemen went 0-for-3, and comically so. The laughter and camaraderie took the edge off the gassers.

Hawkins didn't mind that the offensive linemen looked like tee-ball outfielders circling under the punts. He's just glad they tried. He wants to push players out of their comfort zone. He doesn't want them to be afraid to fail. That's why he left Boise State after five seasons with a 53-11 record. That's why he skydived with his daughters Ashley and Brittany this past weekend in Southern California.

If there's a coach Hawkins emulates, it's Pete Carroll. Hawkins had met Carroll before they went on a Nike trip together last year. On that trip, Hawkins walked up to Carroll and said, "I know I don't know you that well, but here's what I think about Pete Carroll. I said, '(1) I think you really coach your guys, (2) you are getting the best players in the country, and 3? I think you get it.'"

Carroll invited Hawkins to speak at a clinic earlier this month and was so intrigued by him that he gave him a ride to the airport so he would have more time with him.

"I felt very familiar with him without knowing him very well," Carroll said last week. "I kind of took to him right off the bat. When he delivered his speech down here, which was the first time I've heard him at any length, we have a tremendous amount in common. I wasn't surprised. Our coaches who were there in the audience were half in shock. They wanted to know, 'How did he know that stuff?'"

The Buffs are a few -- OK, more than a few -- players away from being the Trojans of the Rocky Mountains. Hawkins' offense depends on speed and timing, neither of which is in abundance this spring. Defense and special teams might arrive more quickly.

Hawkins is determined to return the Buffs to the top. If the door is closed, Hawkins will teach them to kick it down.

Even if they leave scuff marks.