BAZAAR, Kan. -- With a cloudless sky, and the Flint Hills still wearing their winter coat, the memorial service Friday commemorating the 75th anniversary of the death of Knute Rockne provided evidence of the connection between God and Notre Dame in which all Irish fans believe: blue and gold, in every direction, as far as the eye could see.

A crowd of approximately 150 people came to remember Rockne and the other seven men who perished when Transcontinental & Western Air Express Flight 599 plunged out of a leaden sky and into this south Kansas pasture. The visitors came from across the state, across the Midwest and across the nation. They came to remember the man who, before his untimely death at age 43, put a small midwestern Catholic university on the national map.

They stood before the Rockne Memorial, a granite obelisk on a limestone base, a sentinel inside a small, rectangular, barbed-wire-and-log fence in the middle of 1,550 acres of rolling tallgrass prairie. It has stood since 1935, placed after a public fund-raising campaign in the midst of the Depression. Beneath the title, chiseled in granite, is the message:

The visitors, buffeted by an unceasing wind, were led in prayer by two priests who drove in from Wichita. The visitors sang the Notre Dame Victory March and walked around, taking in the vastness of the prairie. They stopped at a small pile of a half-dozen rocks, 10 yards behind the monument, placed there to commemorate where Rockne's body was found.

The group celebrated Rockne, still the winningest coach (105-12-5, .881) in the history of major college football. But they also celebrated an 88-year-old man, one of the last on earth with a direct link to the Rock, a link that began only when that Fokker F-10-A lost a wing and turned this remote section of the nation's breadbasket into a death site.

On the morning of March 31, 1931, Easter Heathman, one week shy of his 14th birthday, was one of the first people to arrive at the wreckage.

On the morning of March 31, 2006, Easter Heathman, one week shy of his 89th birthday, stood on this same pasture, cane in hand and Notre Dame hat on his head. For years he has been the unofficial caretaker and tour guide of this site. The Notre Dame faithful and some descendants of the men who died came Friday to give back a small amount of the devotion that Heathman has shown.

"Well, folks, it's sure good to see you all here," Heathman said. "Seventy-five years ago, a plane crashed and eight good people perished. The eight have never been forgotten."

Heathman was shelling seed corn by hand with his father and two older brothers on that cold Tuesday morning in 1931 when he heard a sound that he once described as two race cars. Moments later, Heathman's uncle called to say a plane had crashed near his house. Heathman's home sat a half-mile down the road that came closest to the site. That road, now paved, is State Highway 177.

When Easter, his dad and brothers drove over to help, they found only the grisly wreckage. Five bodies laid strewn on the ground. The other three corpses remained in the plane.

As men carried one body on a stretcher to an ambulance, Heathman saw a rubber bandage trailing alongside. He picked it up and placed it next to the body. Rockne wore that bandage around his right leg to combat the phlebitis that had nearly cost him his life a few years earlier.

Heathman didn't know Rockne. He didn't know who he was the next day, when his grandfather called to tell the family that one of the most famous people in America had been in that plane.

"There was a guy who lived here and had seen every movie show that came to town," Heathman said. "He would spend his last dollar for gas and movie tickets." The man, Heathman said, stared at Rockne. "He kept saying, 'That guy looks familiar to me. I ought to know him,' " Heathman said.

Heathman told me that in 1991, when, as a writer for The Dallas Morning News, I came here to do a story on the 60th anniversary of Rockne's death. Heathman escorted me then, just as he has escorted, by his estimation, more than 1,000 others to the site.

The Rockne Memorial sits a mile or so off of State Highway 177 on pasture owned by a Texas cattleman. There is no marker on the highway to indicate the two-rut road that leads to the monument. Even if there were a marker, two locked gates stand between the highway and the monument. Heathman began escorting visitors after he gave directions to an older couple in a Cadillac. Ninety minutes later, they knocked on his door to tell him they never found the monument.

It remains so remote and unsullied by visitors that remnants of the plane still can be spotted amid the mud and cow patties.

"You can find pieces of glass out here every once in a while, usually after a good rain," said Easter's son, Tom.

As a child, Tom Heathman hiked up to the monument to see it, without telling his dad. "I never came back for 20 years, probably," he said. "One thing Dad always stresses is that eight people died here, not just one."

Terry Happer Scheier, the granddaughter of John Happer, a friend and business associate of Rockne, was one of nine Happer descendants at the ceremony. John Happer worked for the Wilson Meatpacking Co. in Chicago. Wilson planned to start a sporting goods business -- yes, that Wilson Sporting Goods -- and Happer and Rockne had scheduled meetings in Los Angeles.

Happer left behind five children, including a 9-year-old, Andrew, who hopped off the streetcar on his way home from school and saw a newsboy hawking a paper with the news of the crash.

"That's how my father found out his dad died," Scheier said.

Scheier didn't come here until 1991, when the first memorial service took place. Few visitors came before the 1980s. Interest has slowly increased, perhaps because of the rise of the Internet, which has made the information about the crash and the memorial available to more Irish football pilgrims.

Dennis Kelly, a 1976 graduate of Notre Dame and a communications attorney in Annapolis, Md., inserted a stopover on his trip to California in order to attend the ceremony Friday. 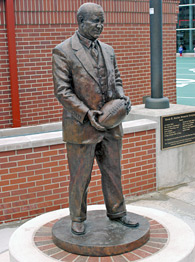 "I'm a devotee of Rockne," Kelly said. "I visited Voss, Norway, his birthplace. The house where he was born was destroyed by the Nazis. Voss was a center of Norwegian resistance. This is the first time I've actually been to the monument. I was out here 15 years ago, not knowing what I was looking for."

After the ceremony, the crowd went back to the Bazaar Schoolhouse, where Bernie Kish, the former executive director of the College Football Hall of Fame and now a professor at Kansas, led a discussion about Rockne.

In one corner of the room, the locals set up a display of memorabilia about the plane crash. There is a campaign to raise money to build a museum in nearby Cottonwood Falls. Tom Bell, president of the Exchange National Bank there, stopped by the local historical society to pick up some exhibits, which include a photocopy of the ledger from the funeral home. In neat handwriting, entry number 468 reads:

In the 1975 book "We Remember Rockne," Irish freshman coach Bill Jones said he asked Rockne, shortly before he left for Los Angeles, "Why can't you go by train? They're a lot safer."

"No, they're not,' Rockne replied. "You don't read your statistics."

Rockne became a statistic, the most famous victim of one of the earliest deadly commercial plane flights. As his life ended, it touched the life of a Kansas teen who has taken it upon himself to honor the memory of the eight victims. Easter Heathman believes this pasture is a sacred place.

"He was only 13 years old," Tom Heathman said. "It was a traumatic experience for a 13-year-old."

So why is taking care of this memorial so important to an 88-year-old man?

"That is a pretty difficult question to answer," Easter Heathman said. He paused and looked across the pasture.

"It was just something that needed doing," he said.