We throw around the phrase "sudden death" in football so much that it loses its impact. When someone in the game dies as suddenly as Northwestern coach Randy Walker did Thursday night at the age of 52, the force of those words lands like a two-by-four to the chest. 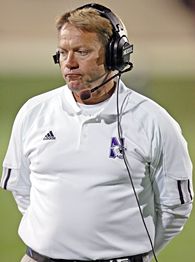 Oklahoma offensive line coach James Patton left Walker's staff a few months ago. Patton set out in the car Friday morning with his wife Nichole and their three children on their family vacation. When his phone rang, it was all he could do not to choke up at every sentence.

"I played for him for three years at Miami [Ohio]," Patton, 35, said. "I was a graduate assistant coach for him for two years. I coached with him at Miami for one year and Northwestern for seven. I spent a lot of time with him."

"Coach had a lot of passion for the game," Patton said. "He was a great worker, very competitive, a very hard-nosed guy. He was a great motivator. He put a very big emphasis on hard work and being disciplined, playing together as a team. All the clichés that everybody talks about, he expected those things."

In 1989, Patton's freshman year at Miami (Ohio), the team won two games, which was two more than it had won the previous year. Under Walker, the RedHawks went 5-5-1 in 1990. In his nine years there, he had only one losing season.

"We all wanted to play. We all loved it," Patton said. "He taught us how hard we had to work, the focus we had to have, the things we needed to be a good team."

Walker demanded the simple stuff, even more so at Northwestern, a school without the resources -- monetary or athletic -- that the other schools in the Big Ten have at their disposal. Combine that discipline with the innovative spread offense Walker employed, and the results have been significant.

He finished seven seasons there with a record of 37-46 (.446), better than his predecessor, Gary Barnett, better than any Wildcats coach since Ara Parseghian left Evanston, Ill., in 1963 to coach at Notre Dame. Walker coached Northwestern to a share of the 2000 Big Ten championship. He is also the only coach in 118 seasons of Northwestern football to have taken the school to three bowl games.

The Wildcats beat every team in the Big Ten at least once. They beat every team but Ohio State and Michigan at least twice. If anyone questioned the regard given Walker, he got the ultimate industry compliment after last season. Cal coach Jeff Tedford, considered one of the best offensive minds in the game, hired Walker's offensive coordinator, Mike Dunbar. Oklahoma coach Bob Stoops hired Patton.

Yet Walker carried no pretensions. He never had them. His coach at Miami (Ohio), Bill Mallory, called him "hard-nosed" and "blue collar" as a running back. Even as Northwestern enjoyed respect and success rare for the most prestigious academic institution in the Big Ten, Walker never adjusted his regular-guyness. Two memories of Walker that stick out speak to his lack of airs.

One memory is not my own, but belongs to Andy Bagnato of the Associated Press, who lived in Evanston when he worked for the Chicago Tribune. Bagnato told me about driving past Walker's home on a hot summer day, and there the head coach was, sweating behind a lawn mower. The number of head coaches who mow their own lawns in these CEO-salary days could be counted on one hand with a few fingers to spare.

The other memory is of a spring practice reporting trip I made a few years ago on a March day when the wind that swept off Lake Michigan and across the practice field hadn't been informed that spring had begun. Walker wore his trademark shorts and never shivered.

Afterward, his wife Tammy showed up with their dog. They walked the dog at dusk like any other suburban empty nesters.

Tammy survives him, as does their son Jamie, a recruiting assistant on the Northwestern staff, and daughter Abbey. As does an entire football community.

"We had good kids. Coach Walker was a leader," Patton said. "They played real hard, you know?" His voice began to crack. "That was Coach's strength, his strength." Patton's voice gave way. He and his wife were on their way to visit family in Ohio and Indiana. There would be an unscheduled stop in Evanston, too.