EVANSTON, Ill. -- The way Pat Fitzgerald looks at it, in death as in life, Randy Walker continues to coach. Barely one month has passed since Walker, the Northwestern football coach, died suddenly at 52. Fitzgerald, his successor, spoke as softly as his raspy South Side foghorn allowed as he recounted staying up through the night, awakening players with phone calls to tell them their lives had been shattered. 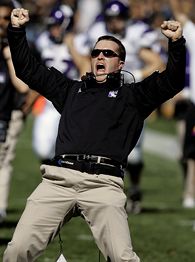 "It just became more and more real every time I hung up the phone with one of my players and called another one," Fitzgerald said Monday afternoon in an athletic department conference room. "So it was just tough. Then it was really tough. That's part of being a coach. You deal with tough times. You deal with adversity. Randy taught us about that every day. It's the worst lesson I've ever had to learn, as far as that goes. I don't think we all wanted to learn it this way, but in his passing, he's teaching us so much more about life."

To listen to Fitzgerald speak, it's hard to believe that he is 31 years old, that only a decade ago he was the All-American linebacker, the two-time Nagurski Award winner who led the Purple to Pasadena. He will share a podium Tuesday at the Big Ten Conference media day in Chicago with 79-year-old Joe Paterno of Penn State. On Dec. 2, 1974, the day Fitzgerald was born, Paterno already had won 84 games. Fitzgerald will be on the sideline opposite Paterno on Sept. 30.

"That's a lot of wins," Fitzgerald said, laughing. "I hope someday to be at 84. That would be great. For all the reasons why people say he's too old, people will say I'm too young. That's why I think it's great for college football."

"What really stood out to me about Pat is his natural leadership ability," Northwestern athletic director Mark Murphy said. "He's been successful at everything he's done. In the ideal world, it's 2012, Randy is retiring and I promote Pat."

Murphy folded his arms, as if to brace himself.

"Given the situation, it was in the best interest of the program to promote from within," he said. "The program is really stable. It's at a level it's probably never been at, in terms of consistency. He gives us the best chance to bring everyone -- the team, the coaching staff -- together. It goes back to his leadership."

As Fitzgerald deals with the demands of a new job for which he was unprepared, he still must deal with the emotions that come from losing a close friend and mentor. The morning of the day Walker died, Fitzgerald had taken his 19-month-old son, Jack, to the office with him, a last stop before vacation in San Diego. He repeated their quick conversation as though he had remembered it a thousand times.

"Chasing my son around the office," Fitzgerald recalled the conversation that ensued.

"That was the last time I saw him."

Walker died that night. The trip to San Diego, the family's first vacation since Jack was born, didn't happen. 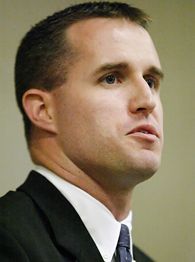 Fitzgerald's voice gets husky as he talks about Walker. As he described the phone call he received the night of June 29, when assistant head coach Jerry Brown asked him whether he was sitting down, Fitzgerald paused and took a deep breath. But he wants to talk about Walker.

"He just asked everybody to push themselves to be their best and strive for excellence," Fitzgerald said. "He would always say, 'I don't get it when people won't try to be that way. I don't understand that.' It's a very moral way to live your life. He was demanding and intolerant of us as coaches and of our players. He'd see things in you that you could never imagine that you could do. He would set a course and push you to be the best you could possibly be."

More important, Fitzgerald wants his players to talk about Walker. The university has made available an array of counselors, from the psychological to the religious to the guys with whistles around their necks. Fitzgerald met with every player who stayed on campus this summer. Some cried. Some, even at a young age, had dealt with death before. Some hadn't.

Fitzgerald doesn't care what the feelings are. He just wants his players to deal with them. He brought each of them into his office, asked a couple of questions, and just listened.

"The hard thing," he said, "is to break down that wall of toughness and pride that men have, especially football players: 'How you doin'?' 'I'm O.K. I'm getting through it.' Well, that's a red flag for guys that I know really well who are really emotional. When things go well, they're really excited. Things don't go well, they compete. You really just have to look at nonverbal cues. You need to look at how they're acting and what they're doing to give you more insight to what they need, [rather] than necessarily what they say."

Fitzgerald is also trying to keep Walker's widow, Tammy, enveloped within the embrace of the Northwestern football family. Tammy and Randy Walker were high school sweethearts and best friends. So are Pat and Stacy Fitzgerald. "Our families live four blocks apart," Fitzgerald said.

On Monday night, the coaching staff, the wives and Tammy went to Wrigley Field to see the Cubs play. It is a tradition, one Randy Walker loved, a way to send off the summer before August camp begins. On Wednesday, the freshmen will report. On Aug. 31, Northwestern will open the season at Miami (Ohio), where Walker played and coached before coming to Evanston in 1999.

"Two programs that are in a strong position on the football field because of Randy Walker," Fitzgerald said. "There's a lot in that game, let alone the emotion."

"It's an honor and very humbling to represent our staff," Fitzgerald said. "That's what I truly feel. I'm representing Randy, our staff and our football family as our head coach."