Redshirt freshman Texas quarterback Colt McCoy couldn't be nicer. In fact, he sounds as if he ought to be getting ready for his junior prom.

There is a lot of "Aw, shucks" in what McCoy says, from the half gallon of milk he drinks every day -- he gave up his beloved Dr Pepper and all other soft drinks in sixth grade -- to the phrase "one game at a time," which McCoy sprinkled liberally throughout a conference call this week as if he were a latter-day Johnny Clichéseed.

"I'm just going to take it as the next game," McCoy said. "Go out and play. Have fun. Give the fans an opportunity to cheer and have fun, and lead my team to victory."

"It" -- the next game -- is not just any game, though. The next game is No. 2 Texas against No. 1 Ohio State, the first regular-season game between the top two in 10 years and the first ever at Darrell K. Royal-Texas Memorial Stadium. The next game will be televised to a prime-time national audience on ABC. The next game is no place for naïveté, much less inexperience.

To listen to McCoy say (accent removed), "I wanted to play college football my whole life," and call his first collegiate start this past Saturday "a dream come true" is to wonder: Why is Longhorns coach Mack Brown putting a 21-game winning streak in the hands of Opie?

It's difficult enough to replace Vince Young, the quarterback who ran and threw the Longhorns to a national championship. Had Young stayed this season, as Brown expected, McCoy would have had a year to get some experience. Instead, a raw quarterback from Jim Ned High in Tuscola, Texas, population 714, is starting one of the biggest games in the history of a historic stadium.

That's Tuscola, which is southeast of Buffalo Gap, as if you didn't know. That's Jim Ned High, a 2A school, which in Texas means big in spirit, small in linemen. 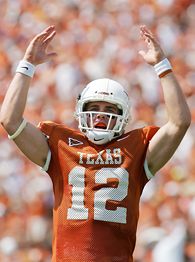 But it turns out this is not just any 2A quarterback. This is a 6-foot-3, 205-pound quarterback. The only raw part of McCoy's performance is when he stands in front of a microphone.

"He says the most nervous he gets is when he comes out here," Texas offensive tackle Justin Blalock told reporters Monday. I don't think [Ohio State] will affect him as much as people would expect, from a freshman especially. It's just not his nature to be uptight."

McCoy might have turned 20 only three days ago, but once he steps on the football field Saturday night, all will be well. He has been around the game as long as he can remember. His father, Brad, coached him at Jim Ned High.

McCoy said any jitters he had Saturday in his collegiate debut went away on his second completion, a low bullet wide receiver Limas Sweed plucked off his shoe tops and took down the middle of the field for a 60-yard touchdown pass. McCoy finished 12-of-19 for 178 yards and three touchdowns in the 56-7 defeat of North Texas.

"I give him an A," said Sweed, who caught the winning touchdown in the 25-22 victory at Ohio State a year ago. I wouldn't give him an A-plus. There's always room for improvement. I'd give him an A-minus. He made all the right reads. He did everything a quarterback should do. It told me he was ready. It showed me he can take things from the practice field and execute them."

Brown and offensive coordinator Greg Davis have taken pains to shield McCoy from feeling as if he has to be in-Vince-ible.

"Colt will be farther ahead of Vince throwing at a similar point in his career," Brown said, "and no one is going to be like Vince was running."

McCoy did have four carries for 38 yards, including a 1-yard touchdown. He has spoken regularly to Young throughout the year and continues to use the Titans quarterback, the No. 3 pick in the NFL draft, as a sounding board.

"Vince told me to have fun, no matter what," McCoy said. "He said you can't play your best if you don't have fun."

With the right result Saturday night, McCoy will be the toast of Texas. Make his an ice-cold milk.