If you love physical football, this game was for you. If you love a game between the tackles; if you think passes are for sissies; if you think the spread offense is an Al Qaeda plot, you should have been one of the 87,451 screamers Saturday at Jordan-Hare Stadium. 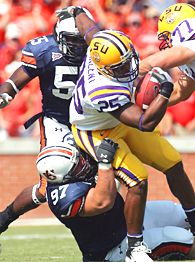 Let the rest of the nation razzle and dazzle. The Southeastern Conference has officially survived the Steve Spurrier Era with its manhood intact. Auburn (3-0, 2-0) took control of the SEC West against its toughest division rival (sorry, Bama) while gaining a grand total of 182 net yards.

The winning Tigers who emerged from the winning locker room to meet the minicams had smiles as noticeable as their limps. They wore pride as cologne, and it wafted off of them like the $50-a-bottle stuff.

Auburn didn't make a first down until its fifth possession of the game.

In the third quarter, after first-and-goal at the LSU 2, Auburn didn't score until third-and-goal from inside the one. Quarterback Brandon Cox wedged between center Joe Cope and right guard Tim Duckworth and surged in with 6:43 left in the quarter.

"The way I feel, we got our tail whipped," said Duckworth, a senior. "We came out in the third quarter and we had that good drive and scored a touchdown. That was Auburn football. Before that, I don't know what that was."

And after that, too. Auburn didn't get inside the LSU 39 again.

Yet LSU (2-1, 0-1) lost. Coach Les Miles will be scratching his head about this one for as long as his Tigers trail Auburn this season.

"If someone had told me we won the turnover battle (one to none), had over 300 yards and outgained our opponent," Miles said, "I would have thought it would have been a different outcome."

On Separation Saturday, when No. 2 Notre Dame got humiliated, Auburn put a temporary end to the hand-wringing of its fans who, their scars still fresh from the unrewarded 13-0 season of 2004, believed that their Tigers might get left behind in the national championship race again.

Tuberville knows it's too early to worry about such things, but then, he couldn't stop gushing over his players long enough to care. He understood that this was a different kind of Separation Saturday, as in men from the boys.

It turned out that both sides had men. 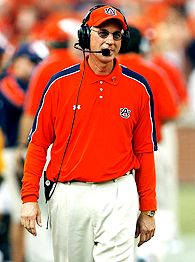 "It was a very violent game," Tuberville said. "There was more speed on that field than I have seen in a long time on both sides."

That from the guy who coached linebackers Jessie Armstead, Micheal Barrow, Darrin Smith and Ray Lewis at Miami.

There's a rule of thumb in college football that the adrenaline and endorphins produced by winning ward off the soreness. That rule didn't make it into the Auburn locker room Saturday.

"I'm already hurting," said quarterback Brandon Cox, who completed 11-of-20 passes for 110 yards, and scored all the touchdowns in the game, a one-yard sneak on third-and-goal. "It's usually the next morning before I'm sore."

Dede, asked to describe the hitting on the field, paid LSU the ultimate compliment.

As tough as LSU played -- defensive tackle Glenn Dorsey had three tackles for loss, including one-and-half sacks -- Auburn won by playing great defense of its own.
Auburn's turnover, a first-quarter interception of Auburn quarterback Brandon Cox that Craig Steltz returned 16 yards to the Auburn 29, produced a loss of nine yards and an LSU punt.

Four plays later, Colt David made a 42-yard field goal on the final play of the half to give LSU a 3-0 lead. After LSU coach Les Miles let the clock run to :02.5 and called time out, assuring that David's kick would end the half, Tuberville responded by calling timeout. It was clear that points would be as scarce as clouds on this late-summer afternoon, so why not ice the kicker, even at the half? 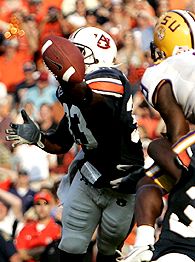 LSU threatened Auburn twice in the final quarter. The first drive ended at the Auburn 31 when, on fourth-and-eight, strong safety Eric Brock dived and tipped Russell's pass near the goal line away from Early Doucet with 2:43 to play. It's a good thing that Brock got a hand on it, because Doucet got tackled by corner Zach Gilbert before the ball reached him. The officials waved the pass interference off after the tip.

LSU forced Auburn to punt and took over on its own 20 with 1:06 to play and no timeouts. Auburn defensive coordinator Will Muschamp tried to play a scheme with six defensive backs even though two of his top players in the secondary had been lost to injury. The inexperience showed. Safety Aarion Savage played too deep, and Russell completed passes of 20 and 21 yards to Craig Davis, followed by a 21-yarder to Dwayne Bowe.

That play put LSU at the Auburn 19, the visitors' first snap inside the 20 all game. After a penalty for having six men on the line of scrimmage, Russell spiked the ball with 2.5 seconds to play.

Russell may have finished 20-for-35 for 269 yards. He may be, even after the loss, 16-3 as a starter. He may go on to a long, successful career in the NFL. But LSU fans will always wonder why he didn't throw into the end zone on the final drive.

Davis caught Russell's last pass at the Auburn 4, where Brock, the defensive hero of the previous drive, decleated him with the clock reading 0:00. As the Auburn fans roared and the winners celebrated, Davis lay on his back and didn't move.

Davis exonerated Russell but said, "I was expecting it to be a jump ball in the end zone."

"I just put my heels on the goal line, and Coach said, 'Nothing behind us, guys,' " Brock said. "Instead of going for the pick, I just wanted to secure the tackle and get the 'W' for my team. I knew when I made contact, it was golden."

It was the perfect hit to end this kind of a game.

Afterward, Duckworth stood to leave the interview room, his left leg wrapped from ankle to calf in white tape, and limped out. He planned to go home and sleep.

The line into the training room Sunday will be a long one.