Senior quarterback Drew Tate took a brief look at video of Iowa's 33-7 rout of Ohio State two years ago and didn't see much resemblance between those Buckeyes and the Buckeyes (4-0, 1-0) who will arrive in Kinnick Stadium on Saturday night with the No. 1 ranking in the country.

Tate also didn't see much resemblance between the Hawkeyes' quarterback who completed 26 of 39 passes for 331 yards and three touchdowns in that game and the guy who will start for No. 13 Iowa (4-0, 1-0) in the Hawkeyes' second night game ever in Iowa City. 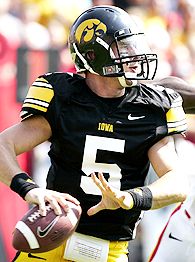 Two years of experience. Two years of maturity. Drew Tate, No. 5, who turns 22 a week from Sunday, believes he is that much better. That's good news for Iowa fans with dreams of upsetting the top-ranked team in the nation. It's also a tastier morsel of memory than the Iowa-Ohio State game of last year.

The image of that game that has resurfaced this week is of former Ohio State linebacker A. J. Hawk sacking Tate, who lifted himself off the ground and spiked the football in frustration. An official flagged him for delay of game. Tate didn't want the penalty, and surely he didn't want to delay the game. Tate wanted to get the 31-6 loss over as quickly as possible.

"We didn't have an identity. We weren't comfortable. It was men against boys," Tate said via cell phone Wednesday night. "They controlled both lines of scrimmage. They set the tempo. We were just like Ohio State the year before."

"If that was a selfish act, I would have had a real problem," Ferentz said. "It was frustration. It was a good teaching moment, one of those Kodak teaching moments."

Ferentz saw in Tate the competitiveness and the intelligence that have been a trademark of his best players. Tate is the stepson of Dick Olin, who also coached him at Lee High. Tate grew up going to football practice, serving as ball boy under the Friday Night Lights, and soaking up a lot of football. You don't have to listen to Tate for very long to hear how integral a role football has had in his life.

"That's all I've ever been around," Tate said. "I don't see myself sitting behind a desk in a cubicle, with a tie. I'm better with hands-on stuff. If I wasn't playing this, I'd probably be playing baseball. I was a catcher -- a center fielder and a catcher. My dad wouldn't let me pitch. He thought it would screw up my arm. Throwing curveballs isn't good for throwing spirals, he'd say."

There's one more reason that Ferentz could get him. Tate, as a senior, has topped out at 6 feet and 192 pounds. That's not the size of a quarterback that a Texas or an Oklahoma is going to come after. Ferentz defined his recruiting strategy thusly: "We're looking for diamonds in the rough."

Tate hardly qualified as that in performance, given that he left Lee High with four state career records, including yards (12,180) and touchdown passes (113). But as a college senior on the back end of a successful career, Tate understands that his size matters again. You may not be able to measure heart, but the NFL surely measures height and weight.

"It's my last year," Tate said. "If I'm fortunate enough to go to the next level, great. I'm not betting on it. That's why I'm trying to have fun. I don't know if I'm big enough [for the NFL]. I think my arm strength is fine. For that league, it might not be. I'd love to play there. I'm really going to try to. If not, I'm not going to be as disappointed as some guys."

There's a lot of maturity in that sentiment. But it's not the first time he has shown maturity on the athletic field this year. In June, Tate turned down a $25,000 prize for making a hole-in-one in a charity golf tournament in Iowa City because accepting it would have been an NCAA violation.

Tate talks as if he has done a lot of growing up in his four years in Iowa City. He has outgrown the scene in the downtown bars, which he describes as "all those drunk people sitting there asking questions. You try to be friendly."

He is squiring at least two women around Iowa City these days. His mother and his aunt moved near campus for the fall to see more of Tate's games. The clean crib and clean laundry are just fine with him. He would like to clean up against Ohio State as well, but that will be hard to do, even if the Hawkeyes have won 25 of their last 26 at Kinnick Stadium.

That's where Tate's leadership has come into play. He has not been 100 percent healthy this season. An abdominal muscle strain kept him out of the game at Syracuse, which Iowa survived 20-13 in double overtime. Tate watched from the sideline. His practice time remains curtailed enough that Ferentz revealed his concern this week.

"It has taken away from his preparation time," said Ferentz, a t-crosser and i-dotter from way back. "We've had to limit the amount of work he can get."

Tate, asked how he feels, responded with a loud, penetrating silence.

"Uh, it comes and it goes," Tate said. "I'm supposed to be real general on that."

Tate's numbers this season (687 yards, 62.3 completion percentage, seven touchdowns, two interceptions) are in line with how he performed in his first two seasons as a starter. He is 21-7 as a starter and fewer than 600 yards shy of moving into second place on the Iowa career passing list behind the sainted Chuck Long.

It will have been an outstanding career no matter what happens Saturday night. But if Tate extends Iowa's wins at Kinnick Stadium to 26 of the last 27, they'll begin casting statues of him on Monday morning.