The statistics could tell a pretty story about the emergence of LSU junior defensive tackle Glenn Dorsey, and they will in due time. But it might be more effective to let Auburn senior guard Tim Duckworth speak.

Duckworth made second-team All-SEC last season. He is 6-foot-4, 310 pounds and the current SEC Offensive Lineman of the Week. He has played for four years and started for two. He knows his way around the line of scrimmage. 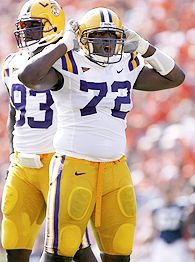 "That guy right there," Duckworth began, referring to Dorsey. "He's one of those guys who's going all out on every play. I tip my hat to him. I haven't gone against a lot of good guys. You can guarantee he's good. I felt like he came off every play as if it was his last play. That's the type of guy I want on my team."

On Auburn's first offensive snap of the game, Duckworth said, "I got into him, and I thought, 'I'm going to kill him the whole game.'"

Before the first quarter ended, Dorsey had his first sack. He shared another one, finishing with three tackles for loss and eight overall in LSU's 7-3 loss.

"I cut him one time," Duckworth said. "He got up off the ground and made the tackle. He was just the Energizer Bunny. When a guy can come upfield full speed and spin and never lose his balance, that's the kind of guy I'm going to see in the NFL."

Dorsey won SEC Defensive Lineman of the Week for the Auburn game, just as he had against Arizona. He leads the team with six tackles for loss and is second in tackles with 23. His role Saturday, when No. 9 LSU will play at No. 5 Florida -- a game the Tigers must win to keep Auburn within sight in the SEC West -- is critical.

Although Dorsey has shown promise the past two seasons, he had large cleats to fill. Both of the Tigers' interior defensive linemen last season, Kyle Williams and Claude Wroten, made the All-SEC team.

"From Kyle, I took the mental mind-set," Dorsey said. "I thought he was a very tough guy. Whether it's 100 degrees or 5 degrees, he's going to get ready to work. From Claude, I just tried to be athletic. Claude is one of the best athletes I've ever seen. I tried to take his moves and apply them to my game.

"I used to watch Marcus Spears [former LSU defensive end, first-round pick by Dallas in 2005] and he practiced hard every day. It's all about mind-set."

Three years ago, when current LSU head coach Les Miles was at Oklahoma State, he made a run at luring Dorsey out of Gonzales, La. Miles didn't have much of a chance, but he proved he has an eye for talent.