BERKELEY, Calif. -- The newest comedy club in the East Bay is open weekdays at Memorial Stadium. The performers go on the road a few Saturdays in the fall. The room usually seats 11, and your host, the quarterback of the No. 10 California Golden Bears, is Nate Longshore. Welcome to the Comedy Huddle.

Take the 1-yard touchdown run Longshore made early in the second quarter against Oregon on Oct. 7. The run broke open the game, giving the Bears a 21-3 lead in what would be a 45-24 victory. The run call broke up the offense.

"As soon as I got the play call I was laughing," Longshore said, "because everyone always makes fun of me when I run because " he paused, searching for a way to smooth it over, and then gave up, "I look funny. 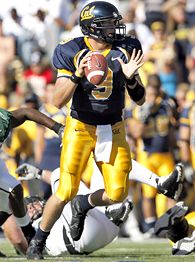 "As I call the play," Longshore said, "everyone is saying, 'Oh, this oughta be good. I can't wait to see this on film tomorrow.' As soon as I snap it, they drive everybody off, I get in the end zone, and then we celebrate. Everyone is laughing at me. It was fun."

What we have, ladies and gentlemen, is frat-boy humor with a dress code. The Comedy Huddle's next appearance will be Saturday evening at Memorial Stadium, where the Bears (7-1, 5-0) put their Pac-10 Conference lead on the line against UCLA (4-4, 2-3). Warning: No one gets in without shoulder pads and a helmet. The Cal offense operates well -- 439.9 yards and 36.1 points per game -- but operates especially well on each other.

"That's really what it is out there, a bunch of smart-asses," Longshore said. A stricken look crosses his face. "You can't put that I said that. My mom will kill me. Smart alecks."

"We're all on the same page when it comes to sense of humor," said senior guard Erik Robertson, the leader of a mostly young offensive line. "It's easy to have that when you're ahead. We've been in those situations, so we can cut loose and enjoy it. It's awesome to go out there and come back from a play with a smile on your face, joking and stuff. Definitely, a bunch of smart-asses. That's a good description."

Robertson said his mom had no problem with the tattoos that cover his body, so she might be OK with his choice of vocabulary too.
He and Longshore may be part of the Cal offense but Longshore believes the humor is a form of defense.

"This is pretty much a job," the quarterback said. "All we do all day is football. If you don't enjoy it, life gets pretty miserable, pretty tedious. We try to enjoy it. We're up here so much. I found that we play best when we're loose. It's definitely much easier with the guys we have, all the jokesters. We have a great time out there."

Sophomore receiver DeSean Jackson, one of the quieter members of the Berkeley Laughter and Touchdown Society, said, "Football is a game of having fun. If you're not having fun, nobody is really happy."

Jackson said the receivers go back to the huddle and chirp at Longshore to get them the ball. Meanwhile the offensive linemen are mocking each other. It's a wonder that the redshirt sophomore gets the play called and the team to the line of scrimmage.

"Everyone understands as soon as we break the huddle," Longshore said, "you won't hear anybody laughing. During that play, everyone is serious and focused. As soon as it's over, we get back to the huddle and make fun of each other."

Well, sometimes the laughter starts before the players get back to the huddle. Woe be unto the offensive lineman caught lunging on a block, or taking a half-step before the snap. He doesn't have to wait for the meeting with the O-line coach and the video session the next day.

"Someone will jump offside," Robertson said, "so you say, 'You dumb-ass.' It's never malicious. We don't point the finger. It's just messin' around. We do it with a smile on our face. It's just brotherly love, picking on each other."

No one is immune, including the guys on the other side of the line of scrimmage.

With a fine deadpan, Longshore said, "I think it's a little different than Coach Tedford is used to."

That would be head coach Jeff Tedford, who is to belly laughs what Larry the Cable Guy is to nuclear physics.

"Game time they are serious," Tedford said. "They practice hard and practice well. They still like to laugh. If it gets carried away, I'll get on them. A little laughter in practice is not all that bad. I'm OK with it."

As with all authority figures, Tedford and his staff are not immune from the collective wisdom of those in their charge. But Longshore, an American Studies major at one of the best public universities in the nation, is not stupid.

"No comment," he said with twinkling eyes, referring to the anecdotes he refused to reveal, "only because I'm the one that always makes fun of him. It's never an attack on anybody. We're not trying to make fun of anyone. It's more like pointing out when people are goofy, saying something funny."

Say, for instance, if an unnamed coach celebrated on the sideline with a step that wouldn't get him on "Dancing With the Stars." It won't be commented on in this space, but it might just have been fodder for the Comedy Huddle.