ANN ARBOR, Mich. -- What's striking about the Michigan defense is not the way it has become the best run defense in nearly 50 years, or how at least three starters have a good chance of shaking NFL commissioner Roger Goodell's hand as first-round picks next April. 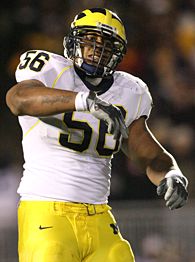 It's the way that knowledgeable football people talk about the Wolverines.

"They've got a defensive line that we'd all like to have," Minnesota coach Glen Mason said.

You hear coaches and analysts speak of athleticism -- not a word often utilized to describe a front seven. But the defense that has led Michigan to an 11-0 record and a No. 2 ranking, the defense charged with the responsibility of slowing down Ohio State quarterback Troy Smith on Saturday, is big and fast.

Defensive end LaMarr Woodley is the leader of a line so talented and deep that it has 25 of the team's 40 sacks. Blitzes? Who needs blitzes to pressure the quarterback?

The Michigan run defense is the best in a generation. The Wolverines are allowing only 29.9 yards per game, which, if it holds up, would be the lowest in major college football since 1959.

There are other, subtler clues within the statistics.

What that says is that people don't even try to run anymore. Only Minnesota, which rushed for 108 yards, has finished a game against Michigan with more than 60 yards on the ground.

"LaMarr Woodley seems like he has been around forever," Mason said. "He's athletic as all get-out. I really like [nose tackle Terrance] Taylor. He gives you problems on the inside. [Tackle Alan] Branch moves extremely well for a big guy. The linebackers are very athletic. The secondary is really good. If the guys are good and physical at the back end, you've got a great defense."

Only a season ago, the Wolverines allowed 345.2 yards and 20.3 points per game. This season, the totals are 231.5 and 12.1, respectively. That's one of the big explanations for the improvement from 7-5 to 11-0. The biggest difference in the defense is the booming voice and 12-cylinder engine that is defensive coordinator Ron English.

"Coach English is a guy who's just fired up all the time," Woodley said. "He's ready to go."

Even as the defense struggled the last several years under former coordinator Jim Herrmann, the secondary, coached by English since 2003, shone. After last season, English accepted a job with the Chicago Bears. Before a week had elapsed, Herrmann had left Michigan to become the New York Jets' linebacker coach and Carr had hired English back to run the defense.

Neither players nor coaches will go into detail about the difference between last year and this year. Michigan is famously private about its inner workings. Any question about a flaw -- even one a year old -- is met with resistance, usually polite.
But this much is true, judging from interviews: The defense last season suffered from an overstuffed playbook. English brought a dose of simplicity and a double dose of want-to. To paraphrase the great defensive coordinator James Carville,

"It's the quarterback, stupid." 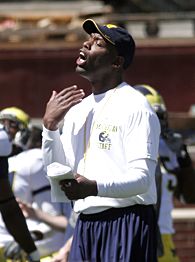 The players sound the same refrain.

The key to stopping Smith, said Woodley, a co-captain, is "every guy on the defense doing what he's supposed to do, doing his responsibility.  You don't find any guy on this defense that's trying to do anything extra by making plays. He's just doing what he's coached to do."

Added senior linebacker David Harris, "It's everybody knowing their assignment and everybody getting to the ball every play."

Freelancing is out. Finding the ball via a straight path is in. Michigan's 40 sacks this season are second in the nation on a per-game basis (3.64).

The Wolverines have allowed three running plays of 20 yards or longer: a 20-yarder by Minnesota tailback Amir Pinnix, a 21-yard gain by Iowa quarterback Drew Tate and a 25-yarder by Ontario Sneed of Central Michigan in the second game of the season.

Put another way, in the last six games, no tailback has broken a big play against Michigan.

No one is more responsible for that than Woodley, a senior from Saginaw, Mich., and Lombardi Award finalist. Woodley leads the Big Ten with 11 sacks for 111 yards. The latter is a school record, the former is one short of the school record. He also has forced four fumbles, tied for first in the Big Ten.

"He can do it all as far as pass rush," Michigan right offensive tackle Rueben Riley said. "He can give you the bull [straight ahead]. He can go around the edge. It's troubling to figure out what he's going to do. That's what makes him good.
When he's coming off that edge, it's a question mark. You don't know what you're going to get."

The 6-foot-2, 268-pound Woodley moved back and forth between linebacker and defensive end during his first three years at Michigan. He started two games on the line as a freshman on a Big Ten champion. As a sophomore, he made second-team all-conference as an outside linebacker and won Defensive Player of the Game in the Rose Bowl after making 11 tackles, four behind the line.

He played linebacker again as a junior, but moved back to the line last spring.

His quickness and speed, along with the unusual athleticism of Taylor and Branch inside, allow the Wolverines to pressure opposing quarterbacks with a four-man rush. That makes the pass defense's job a lot easier.

There are other stars, of course. Corner Leon Hall, who was named a Nagurski Award finalist, is considered one of the top cover guys in the country. Harris, said English, "is just far and away the best linebacker I've ever been around, and I played with Hardy Nickerson [the five-time Pro Bowler with whom English played at the University of California]."

The battle within the battle of undefeateds Saturday at the Horseshoe will be the explosive Ohio State offense against this Michigan defense. Few teams have slowed down the Buckeyes. Fewer teams have moved the ball against the Wolverines.