In the case of the University of Michigan and The Ohio State University, you can dispense with the stories, the plays and the great games that have been as much a part of the Rose Bowl as the New Year's Day parade. You can dispense with the 1 vs. 2 rankings, the unblemished records for only the third time in 103 meetings, even with the prize of a place in the BCS Championship Game that awaits the winner.

"I'll tell you how big this game is," former Ohio State coach John Cooper said Wednesday on a Master Coaches Survey teleconference. "The loser is going to the Rose Bowl."

All well and good, but all you need to know is this: Everything you have ever heard about the Ohio State-Michigan rivalry is true.

• It is true that the late Ohio State coach Woody Hayes, who did more to pump up the negative feelings in the rivalry than any man, refused to fill up his car in the state of Michigan.

"I'll tell you why we don't," Hayes said, according to the seminal book, "Woody Hayes and the 100-Yard War." "It's because I don't buy one goddam drop of gas in the state of Michigan. We'll coast and push this goddam car to the Ohio line before I give this state a nickel of my money!"

• It is true that in 1950, the teams played through a blizzard with 29 inches of snow and more than 50,000 fans sat through it. Michigan's Chuck Ortmann punted 24 times, and the Wolverines won 9-3, despite failing to make a first down. Buckeyes coach Wes Fesler quit a few days later. Ohio State hired the little-known Hayes away from Miami (Ohio).

• It is true that in 1970, a local judge in Columbus dismissed a charge of obscenity against a defendant arrested for wearing a T-shirt that said, "F--- Michigan" because the message "accurately expressed" local feelings about the university and the state.

• It is true that Hayes sometimes bunked his team in Toledo on the night before a game in Ann Arbor so the Buckeyes could sleep on Ohio ground.

• It is true that, by state law, the Franklin County (Ohio) Board of Elections is supposed to begin counting the provisional ballots cast in this month's 15th Congressional District race on Nov. 18. Rep. Deborah Pryce leads challenger Mary Jo Kilroy by 3,536 votes. However, the board will not begin to count the votes until Nov. 19 so that the counters may watch the Ohio State-Michigan game.

• It is true that the lowest-priced ticket available on StubHub on Thursday, for a seat on the corner of the end zone, on the 41st row of the upper deck, would have set you back $530. Binoculars extra.

That's just another reason why Saturday's contest will be the most important game the players on either team will have ever played.

"Legends are made in this game," Ohio State senior guard T.J. Downing said this week. "Every guy knows they have a chance to go down in the record books and make history."

Jim Tressel grew up in Ohio, the son of a small-college football coach. He thought he knew what this game meant before he came to Columbus as an assistant coach in 1983.

"You can feel the electricity and the energy and you can't quantify it, but you can feel it," Tressel said. "I remember thinking I was preparing for just another game as a coach, and then all of a sudden you got into the environment, and I've mentioned before, I wasn't worth a hoot probably the first quarter because I was just in awe of the feeling."

Hayes could spellbind when he became emotional, and nothing got his emotions going like this rivalry. As recorded by the late Paul Hornung, the longtime Columbus columnist, in 1975 Hayes gave this kind of pregame speech before the Michigan game:
"Men, this is war! I don't care anything about the national championship or the Big Ten championship. But if we win this game today and afterward, if the good Lord says, 'Woody, it's your time,' I'll say, 'Lord, I'm ready!'"

Eight times in the 10 years (1969-78) that Hayes and his protégé, Bo Schembechler, glowered at each other across the sideline, their teams played for the Big Ten championship. Each coach took his team to the Rose Bowl five times. Hayes went 1-4, Schembechler went 0-5, and neither record should come as a surprise. After coaching against each other, they and their teams were spent.

Hayes turned the rivalry with Michigan into his personal, 365-day-a-year war. Nearly two decades after his death, Hayes' obsession with all things maize and blue has become his legacy to the state. Hayes rarely recruited in Michigan. In 1969, perhaps the most famous game in the rivalry before Saturday, Ohio State had no players on its roster from Michigan. The Wolverines had 21 players from Ohio.

"You can feel the electricity and the energy and you can't quantify it, but you can feel it. I remember thinking I was preparing for just another game as a coach, and then all of a sudden you got into the environment, and I've mentioned before, I wasn't worth a hoot probably the first quarter because I was just in awe of the feeling."
-- Jim Tressel on Ohio State-Michigan

Hayes cared nothing about fame, money or the other trappings available to the most loved man in the state. Hayes cared only about succeeding as a football coach, and he saw his biggest obstacle to that as the University of Michigan. Hayes maintained until the day he died that the best team he ever coached was not the 1968 national champions.

(That '68 team not only beat Michigan 50-14, but after the Buckeyes' final fourth-quarter touchdown, the players lined up and went for two, a breach of protocol in every unwritten football manual. When asked why, Hayes delivered a one-liner worthy of Bobby Bowden: "Because they wouldn't let us go for three.")

No, Hayes always said his best team was a year later, when the heart of the national championship squad returned as juniors. The Buckeyes came into Michigan Stadium in 1969 with an 8-0 record, having allowed only 69 points. Ohio State hadn't scored fewer than 34 points in any game, and had scored more than 60 twice.

But the Wolverines had a spy. No coach in America knew Hayes better than Schembechler. He had played for Hayes at Miami (Ohio). He had coached for Hayes at Ohio State from 1958-62. Schembechler loved the man, although he didn't love him enough not to become head coach at Michigan after the 1968 season. 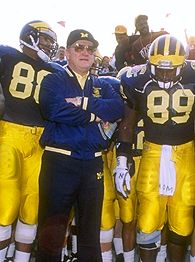 Schembechler never stopped preparing Michigan for Ohio State, and this was in the days before the NCAA limited the number and length of practices.

"It was our strategy here at Michigan to do something to beat Ohio State every day," Schembechler said this week.

Michigan pounced on Ohio State in 1969. The score at the half was 24-12, Michigan. At halftime, defensive coordinator Jim Young, pounding a blackboard on every word for emphasis, yelled at his players, "They will not score again!"

"I swear it was like Bo was in our huddle," Ohio State quarterback Rex Kern said in the 2003 oral history of Ohio State football, "What It Means to Be a Buckeye" "They knew exactly what we were going to do. It was just an ugly day and, without question, the worst loss I ever experienced."

Long after Hayes retired, his former players gathered for a banquet in his honor.
Schembechler, in his memoir, recounted the speech that Hayes gave.

Hayes paused, and looked down the dais at Schembechler.

"Goddamn you, Bo! You will never win a bigger game than that one!"

Hayes would get his revenge. In 1973, No. 1 Ohio State was 9-0, and No. 4 Michigan was 10-0. The Wolverines rallied from a 10-0 deficit to tie the game in the fourth quarter. Michigan kicker Mike Lantry missed field goals of 58 and 44 yards in the final 61 seconds but the Wolverines left the field celebrating. They had been the underdog. They had come back to tie the game. Ohio State had gone to the Rose Bowl the previous year.

The pall of defeat hung over the Buckeyes dressing room.

Schembechler may not have forgiven Duke or the athletic directors yet.

"You know, the thing finally faded away," Schembechler said this week. "If anything, there were some good things that came out of it."

The following year, the league decided to allow non-champions to go to bowl games. That will come in handy this year, when, as Cooper pointed out, the loser will get the consolation prize of the Rose Bowl. The winner will play for the national championship, and you have to hope that the BCS Championship Game on Jan. 8 will live up to the atmosphere at Ohio Stadium on Saturday.

That, like so much about the grand history of this rivalry, is true.