PASADENA, Calif. -- For USC, the Rose Bowl is supposed to be the Promised Land, the football field where the Trojans turn dreams into championships. For the second time in 11 months, USC has come into the historic stadium in the Arroyo Seco and found nothing but heartbreak.

Last January, an offensive battle ended with Texas beating USC, 41-38. On Saturday, the Trojans' drive toward their third consecutive BCS Championship Game ran into a roadblock thrown up by, of all people, their crosstown rivals.

You remember UCLA -- blue and gold, basketball school. The last time anyone took Bruin football seriously, people thought Michael Richards was funny. That would have been the late 1990s, before Pete Carroll revitalized USC. And the UCLA that won back-to-back Pacific-10 Conference championships in 1997-98 never played defense the way the Bruins played it before 90,622 fans Saturday.

UCLA held USC to 55 rushing yards and only one touchdown, winning 13-9 in a game that may be remembered as fondly in Ann Arbor or Gainesville as it ever will in Westwood. The defeat of the Trojans (10-2), No. 2 in the BCS standings, made room for No. 3 Michigan or No. 4 Florida to move up and play No. 1 Ohio State again on Jan. 8. 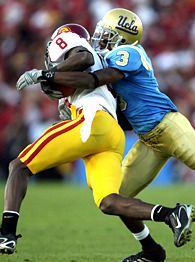 Actually, the chance to play for a national championship may not compare to the emotion that surged through the Rose Bowl when UCLA linebacker Eric McNeal tipped a John David Booty pass, pirouetted and cradled the ball in his hands at the UCLA 20 with 1:10 to play.

That 1998 UCLA team had been the last one to beat USC. Seven years of famine disappeared, and grown men wearing blue and gold hugged and jumped up and down as if they were fourth-graders at a Cheetah Girls concert.

After the game, Bruin defensive end Justin Hickman stood near midfield. If you could have bottled the brightness of his smile, you could solve the energy crisis.

That explains the scheme devised by first-year UCLA defensive coordinator DeWayne Walker. A team that gave up 66 points and 679 yards to USC a year ago dominated the Trojans on Saturday. A former assistant to Pete Carroll at USC, Walker took the two weeks that the Bruins had to prepare for the Trojans and devised a plan that never let Booty get comfortable.

For as long as quarterback Booty plays football, he will remember this afternoon and shudder. For as long as Trojans offensive tackles Sam Baker and Kyle Williams play, they will recall how they never imposed their will on Hickman and his fellow defensive end Bruce Davis.

The Bruin ends combined for 24 sacks coming into this game. They got only one Saturday, by Davis, and the only other one came when Booty slipped and fell. But there is no statistic for an unwillingness to set feet. Booty finished with 23 completions in 39 attempts for 274 yards. But he completed only one deep pass, a 39-yarder to Dwayne Jarrett. 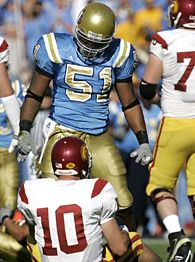 The Trojans didn't score on that possession, either.

"We were out of sync, out of rhythm," USC offensive line coach Pat Ruel said. "We have not been in that situation very often."

The problems showed on USC's first possession. On third-and-one at the UCLA 31, Booty faked a handoff and threw incomplete. Carroll gambled because he knew that the Trojans could pick up the yard on fourth down.

Perhaps he forgot what happened the last time he went for a fourth-and-short at this stadium. USC failed to convert against Texas last January, and failed again Saturday. Chauncey Washington barely got back to the line of scrimmage.

On the second snap of the second possession, Williams committed a false-start penalty.

"I don't think they knew how fast we were up front," said Davis, who is listed at 6-foot-3, 237. "I always look into the offensive tackle's eyes. Sam Baker's eyes were this big. I said, 'Hey, you're going to need some help because I'm coming.'"

After that possession, UCLA drove 91 yards in 12 plays, mostly on Cowan's scrambling, to go ahead 7-0. The Trojans got on the board with a second quarter safety, courtesy of a holding call on center Robert Chai in the end zone, and a one-yard touchdown run by C.J. Gable, finishing a 66-yard drive, to take a 9-7 halftime lead.

The Trojans wouldn't score again. Justin Medlock kicked field goals of 22 and 31 yards in the second half. The first one came when the Bruins had a fourth-and-inches at the USC 5. Dorrell played it conservatively. He had so much confidence in his defense that he thought a 10-9 lead would be sufficient.

Dorrell's faith in this team never wavered, not when the defense fell apart on Notre Dame's late drive to win 20-17, not when the Bruins lost four straight games at midseason. 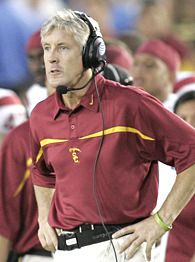 "We had high expectations early in the year," Dorrell said. "I told a lot of people how good we were going to be. We didn't quite amount to that. We started showing our true character and ability at the end of the season."

On the first play of the fourth quarter, not far from where LenDale White failed to move the chains against the Longhorns, the Bruins stopped Gable on fourth-and-two at their 36. Gable lost four yards.
USC mounted one last drive, starting at its 29 with 5:52 to play. The going was slow. The Trojans needed nearly two minutes to make a first down, which they did on a fourth-and-one that Booty got by the length of a football. They ditched the huddle. By the time they reached the UCLA 18, they had used 12 plays.

USC receiver Steve Smith went into motion, left to right, and when the ball was snapped, bounced off a defender and back out to the left. McNeal, a nickel linebacker who lost his starting job early this season, made a play on the ball that will be remembered for as long as this rivalry lives.

"It's extremely disappointing for us," Carroll said. "We had a great opportunity that we let get away.  It's very difficult for us at this moment. What I obviously have to convey to our guys is that we have a Pac-10 championship to represent, and that's what we're going to do, and we're going to do it in great fashion."

That will be on Jan. 1, here at the Rose Bowl, where the Trojans have had their hearts broken twice. It seems almost cruel.