NEW YORK -- Four years ago, it seemed obvious that an Ohio State freshman would win the Heisman Trophy. Just not this freshman, not the guy who quarterbacked the scout team that prepared the Buckeyes to upset Miami in the Fiesta Bowl.

Tailback Maurice Clarett, the freshman star of that national championship team, is long gone from Columbus. Quarterback Troy Smith, the closest Ohio State had to an afterthought signee in February 2002, became the closest to a unanimous Heisman winner in the 71 years of the award on Saturday night.

"Now I am part of this elite group," said Smith, the fifth-year quarterback who has led Ohio State to the BCS Championship Game. "It humbles me."

Smith received 801 first-place votes cast by the national electorate. That is 86.7 percent of the votes, the highest percentage in history. In a season in which Ohio State played only one team after September that finished with a winning record, Smith's biggest rout came in the most prestigious individual competition in college football. Even the players who finished behind him, Arkansas sophomore tailback Darren McFadden and Notre Dame senior quarterback Brady Quinn, endorsed Smith. 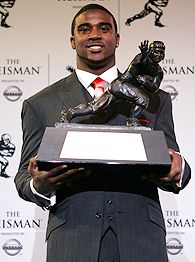 "I would have voted for Troy," Quinn said. "I really think he did a great job all year not allowing the pressure to get to him, doing a good job for his team and getting his team to the national championship game."

Notre Dame has been at seven Heismans and holding since Tim Brown won in 1987. For the second consecutive season, a school has pulled even with Notre Dame. Last year, it was USC. Now the Buckeyes have won their lucky seventh.

Quinn, McFadden and Smith entered the lobby of the Nokia Theater at 6:20 p.m. Smith looked resplendent in a charcoal three-piece suit with a scarlet pinstripe, a white spread-collared shirt and, naturally, a red and gray tie.

The Buckeye quarterback's face lit up when he spotted Ohio State quarterback coach Joe Daniels and head coach Jim Tressel. He walked over, hugged each, and, smile on his face, glided toward the green room behind the stage.

Nearby, the Oldest Living Buckeye Heisman Winner had a hop in his step as he ambled across the theater lobby. In any other 72-year-old, that hop actually might be a limp. But the years melted away from Howard "Hopalong" Cassady when the 1955 Heisman winner began talking about Smith.

"He's just an outstanding athlete and a great person," Cassady said. "He runs the team. He's got a great coach. He always talks about the team. I'm just tickled. I'm very proud of him. I'm proud to be his friend."

The Two-Time Buckeye Heisman Winner spoke with pride of the newest member of Ohio State's most exclusive club.

"Just like when Eddie won it," Archie Griffin said, referring to Eddie George, who won the Heisman in 1995. "I am just elated. It was a very, very emotional evening for me when Eddie won. He embodied the Heisman spirit: the hard work, the dedication, the commitment to excellence.

"Troy's got that. Nobody worked harder than Troy," said Griffin, the president of The Ohio State University Alumni Association. "And his leadership has been so impressive. The way the players rally around him, and look to him, you can see they're thinking, 'We know Troy is going to get us out of this.' That's a heck of a burden. And he does it. In that Michigan game he took some violent hits and he bounced right back up. He's special."

George sat in the audience at the Nokia Theater, as did Cassady, Griffin and 22 other Heisman winners -- 23, if you count Smith. He remained in control of his emotions, even as he admitted that his heart pounded against the wall of his chest. His coach, the unflappable Tressel, looked totally flapped as he hugged his team's leader. When the hug ended, Tressel's eyes remained wet.

"I would have voted for Troy. I really think he did a great job all year not allowing the pressure to get to him, doing a good job for his team and getting his team to the national championship game."
-- Notre Dame quarterback Brady Quinn

"Oh, my," Smith said. "If you get into a situation where you can shake and rattle him, you've done something."

Smith has done so much. He has overcome what he described as "the mean streets of Cleveland," a childhood that included four years of foster care while his mother proved incapable of caring for him. He has overcome taking $500 from a booster at Ohio State. Every hurdle placed before Smith -- some of which he placed himself -- he has overcome. The only one left in his career at Ohio State is the national championship game against the Florida Gators.

No one has changed more. And no one, after Saturday night, has more accolades than Troy Smith.