PARADISE VALLEY, Ariz. -- Wealth just triumphed over imagination. The power of college athletics once again ran right up the middle against higher education. Alabama's hiring of Nick Saban takes everything that is skewed about college football, shines a spotlight on it and says, "Hey, watch this!" 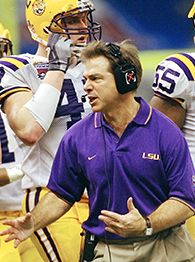 Which, if memory serves me, is a punch line to one of Jeff Foxworthy's "You might be a redneck" jokes, as in, "Has anyone in your family died after saying, 'Hey, watch this!'?"

Yep, Alabama done gone and bought itself a football coach.

The promise is enticing for Crimson Tide fans. Saban returns to college football, where at LSU he won the 2003 BCS national championship; returns to the Southeastern Conference, which his Tiger teams won in 2001 and 2003; and returns to Bryant-Denny Stadium, where he is 2-0 as a head coach.

It may well be that Saban and his family will find their bliss on the banks of the Black Warrior River. It may be that his fourth collegiate marriage will be the perfect one, just as Paul "Bear" Bryant made Alabama his fourth and final coaching home.

But there's a big difference between Saban and Bryant. Mama didn't call Saban to Tuscaloosa. Mammon did.

Mammon, in the personages of university president Robert Witt and athletic director Mal Moore. Here's hoping that neither man has the gall to complain about the athletic arms race anytime soon.

If the Crimson Tide fans parched for success interrupt their backslapping for just a moment, they will see why the hiring of Saban is not the cure for all their problems. It just means they have traded their problems in for a new set.

For instance, Saban, for all his success, has found a reason to leave the last three coaching jobs he's had. At Michigan State, he didn't like being The Other School to Michigan. At LSU, he felt underappreciated after winning the national championship and he left for the money and the challenge of the NFL. At the Miami Dolphins, he didn't like the lack of control he had over his adult players. Why would he be happy at Alabama when he has had trouble being happy everywhere he has coached?