Editor's note: ESPN.com asked five of its analysts to discuss one change they would like to see in college football. Here is the fourth installment of the five-part series.

Talk about slam-dunk assignments. ESPN.com wants to know how I would change the BCS. I know, I know, it sounds like asking Al Gore how he would change environmental policy. The BCS is about as popular as Hummers these days. The BCS, like the behemoth gas guzzlers, is considered a survivor of an earlier error.

So listen up. Poise your pen over your pad. Take good notes. Here is the complete list of changes I would make to the college football postseason:

Shall I repeat them? 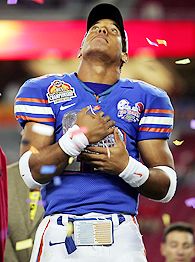 That is what is known as an inconvenient truth. The BCS is just fine the way it is.

Oh, fine, if you want to change something, stop the coaches' poll and the Harris poll from finding new ways to make a mockery of the process every year and appoint a credible cross section of athletic officials (commissioners, athletic directors, etc.) to pick the at-large teams, just as the NCAA does in every other sport.

But don't station me behind the elephants with a shovel and a wheelbarrow and tell me I'm part of the circus. The addition of a plus-one game, the latest trinket to be dangled in front of college football fans, is a distinction without a difference. To wit:

A plus-one game would match the two best teams in the nation after the bowls.

Welcome to the post-postseason. Maybe this idea will catch on in other sports. Let's have a plus-one after the Final Four.

That's silly, you say. The Final Four is a playoff. College football doesn't have a playoff. That's true. But no one in power wants a playoff. What BCS coordinator Mike Slive, the commissioner of the Southeastern Conference, said last week is that they are willing to discuss a plus-one.

A plus-one doesn't solve the current dilemma. It just creates a different one. A year ago, what team should Texas have played after it upset USC? Haven't we had enough of the BCS creating as many problems as it solves?

For a while this season, it looked as if the BCS would have a train wreck. But it didn't. If you have the patience to allow the entire season to play out, most of the perceived potholes repair themselves. Before Jan. 1, Michigan could have made a case for being treated as a third wheel. No one complained after the Wolverines flopped in the second half of the Rose Bowl.