PISCATAWAY, N.J. -- At the Rutgers Bookstore across the street from the New Brunswick train station, merchandise manager Shannon Cook used to restock her supply of hooded sweatshirts at the rate of 48 a month. Now she orders 96 -- twice a month.

T-shirts continue to sell so quickly that boxes of new merchandise are opened and hung on the three "clearance" racks. The store has filled orders across the country and around the world, including to soldiers stationed in Iraq.

Sales of flags with the block R have increased ninefold. That presumably does not include the banners that line the streets in downtown New Brunswick. There are scarlet R's taped in store windows.

"That is unheard of," said Cook, a senior from Bayonne. "When is it going to happen again? Even if we keep winning, there won't be that awestruck feeling."

On the campus where streptomycin, one of the first antibiotics, was discovered, the Rutgers epidemic continues untreated.

There might come a day when the R-dor of Scarlet Knights fans has cooled, when they stop hoping for nine wins in a season and begin to expect them. Until then, there is only one building on Rutgers' four main campuses where the euphoria is contained. That would be the Hale Center, adjacent to Rutgers Stadium, the two-year-old home of Scarlet Knights football.

In his CEO-sized office on the second floor, coach Greg Schiano understands what Rutgers' 11-2 record last season hath wrought. He is not immune to the wonderment that comes with seeing a billboard on the New Jersey Turnpike touting, "The Official Car Insurance of Rutgers Athletics." Before Schiano achieved rock star status in the Garden State, that would have been like seeing a billboard touting corporate sponsorship of the Egyptian Olympic swim team.

"What a legitimizing thing," Schiano said. "We couldn't pay people to want to be with us. Now they are paying us and using our [success]."

He has seen the sale of season tickets rise from 11,000 into the unknown as Rutgers awaits renewals. All anyone knows is that Rutgers has a waiting list with 2,000 names on it.

"Two years ago, the day of the game, you could come at halftime and still get a ticket," said deputy athletic director Kevin MacConnell. "You could get anything you wanted on the upper deck and anything in the end zone. We had Kids Day, Parents Day, Cub Scouts Day, Family Four-Packs. All of those 'Days' are gone."

Those days are gone, indeed. Schiano has allowed himself to dream of a day when a Rutgers season ticket "can be like Packers tickets and Giants tickets. There's a mystique. People think, 'If I can get in there, I can give these tickets to my grandchildren.' That feel can be around the program."

It is one month to the day after Schiano accepted the Eddie Robinson Coach of the Year Award in Scottsdale, Ariz. It is two days before signing day, when Schiano will announce that Rutgers has signed prospects who rejected Ohio State and Florida, the teams that played for the national championship.

It is light years since Schiano went 3-20 in 2001-02. In fact, after last season, Schiano's six-year winning percentage came in sight of sea level (30-41, .423). Although others might quickly do the math and determine that a 12-1 record next season would get Schiano to .500, he does not traffic in such luxuries.

All Schiano is sure of is that the reading of last season's storybook is over. He likes the happily-ever-after ending, but he doesn't plan to keep rereading it.

"The key to programs that sustain success at a high level, like Nebraska over the years, is that they are constantly reinventing themselves," Schiano explained. "If it ain't broke, break it and put it back together. Go through the process again. If you don't, you don't grow that way. We're really only one year from being 7-5, which is almost .500."

That 7-5 record in 2005 produced euphoria, too. Rutgers went to its first bowl game in 27 seasons.
That's not good enough anymore.

"One of the things our staff does a good job of," Schiano said, "is dealing in facts, not fantasy: 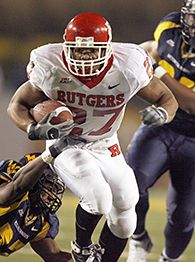 "North Carolina was driving to win the game [before Rutgers intercepted to preserve a 21-16 advantage].

With a share of the Big East championship at stake at West Virginia on Dec. 2, the Scarlet Knights pushed the Mountaineers for three overtimes before losing, 41-39.

It is a problem Schiano has never had to face in his coaching career. Just as Rutgers fans revel in remembering the magic of last season, Schiano is concerned that his teams have forgotten what it feels like to lose. The fifth-year seniors who led the 2006 team lived through that 1-11 season. They understood what it felt like to be humiliated. Fear is a powerful motivator.

"The sophomores that have been here are what, 18-7?" Schiano said. "The freshmen here lost two games and they think we should have won those two."

Schiano sees opponents that will have waited a year to take revenge on Rutgers. Imagine that. He sees teams taking note of the national attention that Rutgers has received. A year ago, anyone proclaiming Rutgers the unofficial college football team of New York City, as MacConnell did last week, would have been met with a "Fuhgedaboutit."

That was the response of Empire State Building Co. general manager Jim Connors when Rutgers asked him to light the Manhattan icon in scarlet for the Louisville game. He initially said no.

"Hey, I'm your average sports fan," Connors said. "I was aware of Rutgers.  Rutgers was not really a well-known excellent sports program."

Rutgers appealed. After ESPN led its telecast of the game with the shot of the Empire State Building, and Connors heard about it for weeks afterward, he believes.

Schiano believes, too. Just not blindly.

"After all the years of not having any success, the fact that we got to a bowl game in 2005, I thought, 'We got a window of opportunity that we have to jump through. If we do, we can find out what life is like on the other side of the window. If we don't, it will shut.'

"We're halfway through. If we land on the other side, you have that kind of momentum. You have natural progress."

That might be the most amazing change of all. Schiano has made Rutgers' progress look natural. The Scarlet Knights have 14 starters returning, including Rice, the junior-to-be who finished third in the nation in rushing (1,794 yards, 20 touchdowns). They have a defense led by All-Big East tackle and team captain Eric Foster. Kicker Jeremy Ito, the hero of the Louisville game, returns for his senior season.

Raised expectations, like season-ticket waiting lists and empty clearance racks, are an issue Rutgers once only hoped to have. The Scarlet Knights have them now.