The question concerning Bret Bielema is whether he will be the next Barry Switzer or the next Bill Battle.

Switzer, an Oklahoma assistant, took over the Sooners in 1973 at age 35 and went 10-0-1. He won at least a share of the national championship in the next two years and won a third in 1985. Battle, a Tennessee assistant, took over the Volunteers in 1970 at age 28 and went 11-1. Over seven seasons, his victory total slowly dwindled until he went 6-5 in 1976 and was fired. 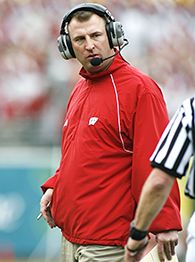 Bielema, a Wisconsin assistant, took over as head coach at 35 for the 2006 season and went 12-1, becoming only the third coach in the modern era to win 12 games in his first season (the others: Chris Petersen at Boise State and Larry Coker at Miami).

Last week, Bielema received a contract extension that raised his salary from the kid-you-better-prove-yourself amount of $750,000 to the OK-you-did total of $1.3 million.

It will be hard to go up from here, but there's a lot of room to go down. Ask Coker, who left Miami in December with a 60-15 career record and a pink slip.

Bielema believes the Badgers will continue to rise. He combines a small-town affability with the discipline that comes from growing up on a farm. When Wisconsin began its twice-weekly winter workouts the other morning, Bielema brought up to his players their 17-14 victory over Arkansas in the Capital One Bowl.

"When did we win that game against Arkansas?" Bielema asked.

"Did we win it? Or did they give it to us?" Bielema asked.

"Those are the kind of discipline things  that [are] established in the 6 a.m. winter workouts," Bielema said. "It was minus-6 with minus-26 wind chill. Of 94 guys, not a person was late. To me, that says something. That's understanding the little details. It's easy for one guy to be a little late."

That discipline is Bielema's answer to the notion that the Badgers were a soft 12-1, that they defeated only three teams (Penn State, Purdue and Arkansas) that finished the season with a winning record, and that they got by on the luck afforded teams that go relatively injury-free.

The begrudging respect given Wisconsin is available as fuel for the season to come. Bielema volunteered the observation that a defense that finished with better numbers than any in the Big Ten since the late 1990s had exactly one first-team all-conference player: defensive back Jack Ikegwuonu.

But Wisconsin doesn't appear to be a team that worries about what others think. In an age when players go to the mattresses because another team dances on grass painted like a helmet, the Badgers' concerns don't stray far from what they know. 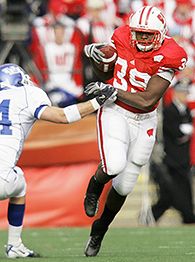 "It doesn't matter who we play," freshman All-American tailback P.J. Hill said when asked about the lack of fiber in the Badgers' 2006 diet. "We still work very, very, very hard. We practice hard. That's being tough. That's something everybody on this team seems to have."

Hill redshirted in 2005 after he broke his leg. He will miss spring practice after undergoing surgery to repair a torn left rotator cuff. Between his medical issues, he rushed for 1,569 yards and 15 touchdowns.
Hill said that when he gets healthy, he will work on "everything."

"My speed, my power, everything I've got," Hill said. "My decision-making. Sometimes I think too much. When I'm reading the blockers, instead of going right, I go left. I just don't want to do that."

Hill is the best-known member of a sophomore class that makes up the bulk of this team. He is also one of 18 returning starters. But it is one of the new guys that has Bielema feeling good. Last week, on the day before the university announced its new five-year, $7.5 million contract with him, Bielema said, "Two great things happened this past season. When (starting quarterback) John Stocco went out, it alerted all the guys that the No. 2s need to step forward."

Stocco missed the last two games of the regular season with a shoulder injury. His backup, junior Tyler Donovan, led the Badgers to victories at Iowa and against Buffalo.

"For Tyler Donovan to get two games and win in a hostile environment showed me, 'Hey, he can play at quarterback,'" Bielema said. "That sent a message to the entire team that I'll be able to draw on for a long time."

Assuming he's a Switzer, not a Battle.