If theater major Micah Andrews needs to call upon method acting to produce tears on stage, he won't have to dig deep in his memory. The Wake Forest starting tailback tore his left ACL in September, in the third game of the season. As the Demon Deacons embarked on what would become the greatest season in school history -- 11 wins, Atlantic Coast Conference championship, Orange Bowl appearance -- Andrews could only stand on crutches on the sideline.

"It was extremely hard to watch games," Andrews said. "I was on the verge of tears before every game. It was pretty depressing stuff."

Andrews had rushed for 256 yards and two touchdowns in three games when he went down in the fourth quarter of Wake's 24-13 victory over Connecticut. 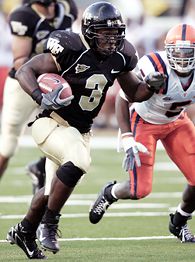 There his season ended. There, Andrews feels, his ownership of what the Demon Deacons achieved ended.

"I feel a part of it as far as playing the first three games," Andrews said. "I don't take any credit. I don't have anything going on for me to take credit for. I know when I get back and do things I know I can do, then I'll take credit. I'm pretty detached from [the season]. That's just the way I feel."

The loss of Andrews makes the rise of Wake Forest even more remarkable. One backup, De'Angelo Bryant, couldn't hold onto the ball. Another, Kevin Harris got hurt as well. That forced wide receiver Kenneth Moore to start at tailback in the second half of the season. Moore performed well (507 yards, two touchdowns), but the 6-foot, 195-pound junior isn't built to run between the tackles.

At 5-10, 215 pounds, Andrews has the body to run inside. He could be too quick to do so. It had taken him until his redshirt junior season last fall to begin to understand the importance of patience. He had learned to let a hole develop.

"He was getting his reads down," running backs coach Billy Mitchell said. "A lot of guys see it. The mind sees it. The body says no. He was starting to make the connection pretty well."

"That's what really bothered me," Andrews said, "the timing of [getting hurt]. I believe God was testing me to see if I would bend or break. In the book of Job, God takes everything away from Job and plagues his family. Job still stayed with God and still praised God. I'm definitely not going to break."

He might have bent a little. Long talks with his parents helped. His father had some experience with this sort of thing. William Andrews starred at Auburn and made four Pro Bowls in five seasons with the Atlanta Falcons before a knee injury curtailed his career.

"It took him two years to get back," Micah said. "He tells me that I'm in a lot better shape than he was. He told me the injury depends on how hard you work. If you want to give up, you won't work as hard."

While recovering last fall, Andrews acted in a play on campus. He is working as a math tutor at an elementary school this winter as he prepares for spring ball, where he will be limited to noncontact drills.

Andrews is a couple of weeks away from getting the green light to push his left knee in the weight room, although he will admit to sneaking a push here and there already. Mitchell said that Andrews has the type of personality that a trainer has to watch.

"He wants to get back out there so much, you don't want him to overdo it," Mitchell said. "He'll work harder than he needs to."

Andrews will get a letter. He will get an ACC championship ring. He got his Orange Bowl gifts. They mean so little to him that he plans to distribute them among his family members.

"They are a lot prouder of it than I am," Andrews said. "It made it easy to be detached. I'm glad I've got another chance to do it again."

It all sets up nicely for Andrews to return. He will take part in noncontact drills in spring practice. He has four returning starters on the offensive line. If Andrews can't go, Harris returns for his sophomore season. Redshirt freshman Josh Adams, one of the most prominent recruits Wake Forest has signed in recent years, and his classmate Lucas Caparelli, will be ready, too.