IOWA CITY, Iowa -- For four seasons under coach Kirk Ferentz, Iowa football had been the Little Engine That Did. From 2002 to 2005, the Hawkeyes shared two Big Ten championships, won 25 conference games and played in four January bowl games.

It wasn't just that Iowa did it. It was how the Hawkeyes did it, with a cast of walk-ons and barely-recruiteds whom Ferentz and his staff took from the bottom of the conference to the top. The team struck a chord with the state it represented.

"There are parallels between our geography and our program," Ferentz said. "We're not selling beaches. We're not selling the desert, or palm trees. This is middle America.  We're big on the basics and big on the work ethic and paying attention to detail. If we really want to talk about being a serious championship contender, we're going to have to be a little more sharper than other folks."

That's what made the 2006 season so hard to stomach. Iowa finished the season 6-7, including a 2-6 record in the Big Ten.

It wasn't just that Iowa did it. It was how the Hawkeyes lost games. They gave them away. Iowa finished minus-11 in turnover margin. They lost to teams that didn't have as much talent. They lost to Northwestern by two touchdowns. They coughed up a two-touchdown lead at Indiana.

And none of it compared to the regular-season-ending loss at Minnesota. Another trademark of Ferentz's teams has been the way they improved as the season advanced. In the previous four seasons, Iowa went 11-2 in November. In the 34-24 loss to the Golden Gophers, the Hawkeyes committed five turnovers. They gained 546 total yards but scored only three touchdowns.

The defense pitched in, too. With Minnesota leading 27-17 early in the fourth quarter, the Gophers had the ball at the Iowa 25, third-and-9. Defensive coordinator Norm Parker, expecting a pass, inserted a fifth defensive back into the lineup. Minnesota tailback Amir Pinnix took the ball and ran through the nickel defense into the end zone.

Parker, as wizened a head as there is in the game, came to Ferentz and beat himself up for the defense he called.

"I'm not sure I'm buying that. In fact, I'm pretty sure I'm not," Ferentz said. "If we knew where they were going to run, yeah, we would have done something different. We were expecting pass. The credit goes to them.

"All that being said, we didn't take on any block at the line of scrimmage and we had a safety come over and [miss] the tackle. Maybe it wasn't the best call based on the play they ran. It should have been an 8- or 10-yard gain at the most instead of a 25-yard run for a touchdown. That's part of football. We'd all be smart if we had the right play every time. That's not how the game works."

When Ferentz saw athletic director Gary Barta after the game, he apologized and promised that the Hawkeyes would not play that way again.

"At the game, I knew we played poorly," Ferentz said. "There's an old axiom in football, it's never as good as you think or never as bad as you think once you look at the tapes. Well, this was worse than we thought. That was really the depressing part when I watched our tape. I think I'm professionally mature enough now where I don't like losing but I've learned to deal with it. What is hard to accept is when we're not bringing what we have to the stadium. That was painfully evident, especially after the last one."

Iowa finished the regular season by going 0-3 in November. So much for a trademark.

Ferentz blamed himself. The assistants blamed themselves. The players weren't immune from the soul-searching, either.

"We'd get to game day and, I don't know if fall apart is the right [description]," defensive end Bryan Mattison said. "We just wouldn't play the way we needed to to win." 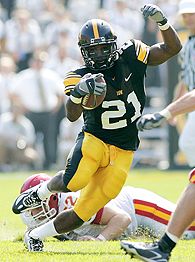 Glue fails to adhere in a losing locker room. Players on both sides of the ball snapped at each other instead of offering support. And in that happy place, the Hawkeyes would be going to a bowl game. Though Iowa finished the season 6-6 with three consecutive losses, the Alamo Bowl selected the Hawkeyes to play against the defending national champion, 9-3 Texas.

When the bowl subdivision schools expanded the schedule from 11 to 12 games in the 2006 season, they relaxed the qualification for the postseason. A winning record would be mandatory no longer. An even number of games meant more .500 teams, and there was a fear that there wouldn't be enough teams to go around.

Without that concession, Iowa's problems would have festered until winter workouts began. Instead, on the Monday after Thanksgiving, when the team met for the first time since the Minnesota loss nine days earlier, Ferentz laid out what the Hawkeyes would do during bowl practice.

"I'm not big on singling out individuals," Ferentz said. "I'm not a big one on putting people's noses in it. The facts are the facts. The real issue was, 'Hey, here's what we've done. Here's where we're at. Now where are we going to go?' One of the most important lessons sports teaches is, 'What's your response going to be?'"

In previous years, Ferentz rarely used all the available time for bowl practice. This time, he implemented a heavy schedule. He scheduled more of what he called "high-tempo" work, that is, starters practicing against starters, backups against backups. He even threw in a two-a-day. Just seeing that on the practice schedule widened the eyes of some players.

"People get the perception that during bowl prep, it's time to relax," Young said. "Our bowl prep, we felt like it was August."

Getting back to the basics can be overdone. As Dan Jenkins wrote in "Saturday's America," legendary Notre Dame coach Frank Leahy once tried to do it with his Irish.

"I hold in my hand a leather ball inflated with air," Leahy said. "Now, who can tell me what this is?"

"Hey, Coach, not so fast," one of his players replied.

Ferentz didn't go that far back. But over the years, he said, as Iowa went to one bowl after another, he had streamlined his bowl preparation. Not anymore. The coaches and the players began to hold each other accountable for little things, the sort that Ferentz said he overlooked. That extended off the field, too.

"It can be something as simple as when you go to training table, you leave your hat on," Mattison said. "Instead of saying, 'Hey buddy, take your hat off. It's a rule,' you let it slide. Stuff like that adds up. I sat back and thought about it a little bit. I can't let things like that slide. Championship teams strive for perfection. That's in every detail."

Mattison has an inside pipeline to championship football. His father Greg is the defensive line coach for Florida and formerly worked at Notre Dame. As a kid, Bryan used to mow the lawn of another Irish assistant named Urban Meyer.

"The way you carry yourself away from football reflects how you're going to play," Mattison said. "If we've got kids skipping class or going to bed late, it's going to carry over to football. It's like starting over. We were fortunate enough to have a chance to play in a bowl game. It was a great opportunity to wipe the slate clean."

"We could have packed it in and said, 'Forget this. We don't need this crap.' Instead, we pulled together and said, 'Let's go get this. We still have a chance to end the season on the right note.'"

It appeared early in the Alamo Bowl as if the Longhorns expected to play a team with a 6-6 record and a three-game losing streak. That's not the team that came out of the Iowa locker room. The Hawkeyes drove 77 yards for a touchdown and held the Longhorns to a three-and-out. On the first play after the punt, Drew Tate completed a pass to Andy Brodell for a 63-yard touchdown. Six and a half minutes into the game, Iowa led 14-0.

With the score 14-3 in the second quarter, Tate drove Iowa 12 plays, using about seven minutes. The Hawkeyes went 88 yards, from their 3 to the Texas 9. On second-and-goal, Tate found tight end Scott Chandler for a touchdown.

But Chandler had not lined up correctly, and an official flagged him for it. On the next snap, All-American cornerback Aaron Ross intercepted Tate. Texas drove 80 yards to score a touchdown in the final minute of the half.

There would be some debate about the penalty on Chandler. Ferentz didn't succumb to the temptation to blame it on the official. That's not how he thinks.

"If it had been ignored, there wouldn't have been outrage on the other sideline," Ferentz said. "My sign on that as a coach is this: You can't leave it to an official's call. If it's close enough to be called, we just didn't pay attention to detail enough. It's kind of like I tell players on the depth chart. If you want a job, make it clear. Don't leave it up to a coach's decision. Beat somebody outright. Then there's no debate as to who should be starting.

"That's a little Kodak moment for the whole season. When you don't do the little things right, you kind of open yourselves up. It ended up having a huge impact on the game."

Instead of blowing the game open, Iowa let Texas back into it. Texas took the second-half kickoff and drove down to kick a field goal. On the first play of the Longhorns' next possession, tailback Jamaal Charles took the ball 72 yards for the go-ahead touchdown. Texas led 20-14.

Iowa had been in this situation during the season, and failed to respond. This time, the Hawkeyes fought back and retook the lead, 21-20, before the defending national champions came back to win, 26-24.

"It wasn't nice to end on a loss," Mattison said. "It was nice to go out and fight the way we did."

"At least we can say we played our type of game," Young said. "We played as a team for once."

They practiced well. They played well, if not good enough. The question for the Hawkeyes as they dig down in winter workouts, as they grind through spring football, as they perform their summer conditioning, is simple. Which team is Iowa and which is the aberration?

Are the Hawkeyes the team that carried the fight to Texas? Or are they the team that couldn't get out of its own way in the second half of last season? The fear of what the answer might be is a powerful force.

"When you have a tough season like this, everything gets magnified," Young said. "Everything the leaders do gets magnified. As a leader myself, I have to be aware of what I say and how I carry myself. When we're in there having a difficult workout, when we're out there running and it's hot out, how do I respond? If you don't see your leader responding in a positive way, busting his tail to his ability, the younger guys might slack off."

Ferentz will continue to remind his team of how much it needs to do. That may not be necessary. The memories of last season are loud enough.

"We can't afford to take anything for granted," Ferentz said. "So far, so good. It's a long race."