Give a coach a video terminal and he will get to work. Put him at practice, give him a whistle, and unless you want to run until you puke, get out of the way. Coaches love competition, and every last one of them understands how much preparation a good performance demands. 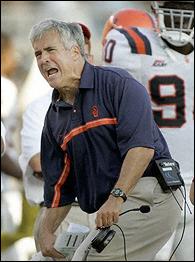 That's Oh My God in textspeak, for those of you who aren't bilingual.

The answer is, the coaches got beat by the recruits. The NCAA Student-Athlete Advisory Committee lobbied the board to stop the practice because it had become too invasive. The coaches killed the goose that laid the golden cell phone.

Over the past two years, text messaging became the lingua franca of coaches anxious to stay in contact with recruits. Why? Because the NCAA ruled that a text message is not a phone call. The NCAA Manual devotes three single-spaced pages to telephone calls and recruits. There are many fewer restraints on e-mail.

The phone rules came into being in 1991, during a time when the NCAA first began to pay attention to the welfare of its student-athletes. The NCAA doesn't always side with the athletes who keep the organization alive -- witness the dunderheaded decision several weeks ago to rescind permission for students who have graduated and still have eligibility to transfer without having to sit out a year.

When the student-athletes complained that text messages grew like kudzu, overtaking lives and taxing wallets, the Division I Board listened. It saw text messages as nothing more than a loophole that mocked the intent of those three pages of rules.

Coaches love loopholes. As competitive as recruiting is, once one coach found the loophole, the rest of the industry poured through. For instance, Florida offensive coordinator Dan Mullen estimates that he sends 50 to 100 texts on a typical day.

"We're big proponents," Mullen said. "That starts with the head man [coach Urban Meyer] down. He's been one of the big text-messagers out there."

Since the phone rules came into effect, coaches have complained that they don't have the opportunity to get to know a recruit well enough to decide whether they want him in their meeting room six days a week.

With text-messaging, Mullen said, "You can converse a little back and forth and get a feel for what type of person you're dealing with."

Most coaches have expressed dismay over the loss of text messaging. The American Football Coaches Association beseeched the Division I Board to delay action and find a compromise. The AFCA didn't know the game already had been decided.

The ban won't hurt all coaches. Florida State director of football operations Andy Urbanic said through a spokesman Wednesday that the Seminoles staff didn't begin to use text messaging until Bobby Bowden brought in five new coaches over the winter.

And as you may have guessed, Arkansas coach Houston Nutt, whose cell-phone and text-messaging bills were outed earlier this month by boosters intent on embarrassing him, said Wednesday that he favored the ban. Nutt's stance had nothing to do with seeing his text messages discussed across the country. He just believed that it might bring a semblance of order to his workday.

"It's gotten to be such a tough, tough thing," Nutt said. "We spend a lot of time text messaging, all day long. I think it [the ban] is good."

So score one for the Luddites. The NCAA may have become an old man at the beach, bucket in hand, intent on holding back the tide of technology that has washed over modern life. Said Mullen, "I have had a couple of recruits ask, 'How are we going to communicate?'"

Sit down, Sonny, and let Gramps tell you of a time when communication went through the post office. The coaches sound as if they are resigned to going back to the future of writing letters. Robinson, who first began recruiting in the dark ages of the 1970s, already has tried it.

"It's funny how with a handwritten letter, you get [a recruit's] attention," he said.