Damon Runyon, one of the early stars of this business, typed out of the side of his mouth. His best-known epigraph captured the Noo Yawk wiseguy in him: "The race is not always to the swift, nor the battle to the strong, but that's the way to bet."

It's a great line, and on Wednesday, the new class of the College Football Hall of Fame proved it to be pretty much baloney. Swift and strong is well and good, but the men honored by the National Football Foundation spoke about resilience.

Everyone gets knocked down. The guys who rise again are the way to bet. 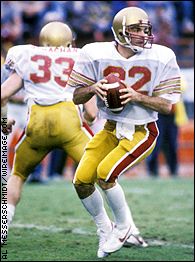 "An assistant coach from Ohio State took a look at my size," said Flutie, who has yet to reach 5-foot-10, "and said, 'Can you dunk a basketball?'"

The coach told him, "You're not a Division I quarterback."

"The great coach Bo Schembechler looked me in the face and told me I wasn't good enough to play at Michigan," Williams said.

The 12 inductees of the 2007 Class included plenty of big, fast athletes: bruisers such as defensive linemen Chris Zorich of Notre Dame and the late Wilson Whitley of Houston, as well as the fleet Texas defensive back Johnny Johnson and record-breaking tailback Anthony Thompson of Indiana.

But it also included Flutie and Williams, who overcame odds throughout their college and professional careers. By being named to the Hall, they overcame perhaps the biggest odds of all. Of the approximately 4.7 million athletes who have played college football, 817 have made it to the Hall of Fame. That's one in every 5,800 or so.

Put another way, of all the high school players who signed grants-in-aid over the last two Februarys at the 120 Division I-A programs, statistically speaking exactly one of them will reach the Hall of Fame.

Flutie and Williams ignored the coaches -- even if, like Schembechler, they also reached the Hall of Fame -- and the writers and the fans who told them they couldn't fulfill their goals.

Another inductee Wednesday, former Oregon offensive star and current television personality Ahmad Rashad, laughed when asked if any coach had ever told him he wouldn't make it.

"I don't think so," Rashad said. "If they did, I would have never believed them."

Speed and strength are important. Resilience speaks to strength inside, strength that can't be measured by 45-pound plates. For years, Rashad reported from courtside as Michael Jordan became the greatest player in the history of basketball. That's the same Jordan cut from the team as a high school sophomore.

Another man sat with Flutie, Rashad and Williams at the head table Wednesday afternoon. Jim Weaver, the athletic director at Virginia Tech, accepted the opportunity offered by the National Football Foundation to thank the people around the world who came to the aid of the university after the shootings last month.

Weaver spoke of the sympathetic e-mail he received from a soldier in Iraq, of the child who emptied his piggy bank to contribute to a fund for the survivors, of the Hokie spirit that continues to infuse the campus as it copes with life after tragedy.

Speed and strength don't matter much in Blacksburg these days, but without resilience, that campus would have curled into a fetal position three weeks ago. On a day when college football saluted its heroes, they reminded us what heroism is made of -- on the field and off.