FAYETTEVILLE, Ark. -- Houston Nutt has the job he dreamed of as a boy, he has had it for nearly 10 years, and how many of us can say that?

He is coming off his best season as head coach at Arkansas, a season that included 10 wins and an SEC West championship. His best player, tailback Darren McFadden, not only finished second in the Heisman Trophy voting but also is returning for the 2007 season.

In sum, Nutt should feel great about his career. The reality is something else entirely. 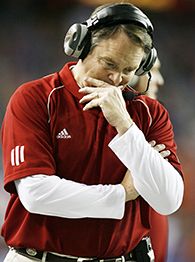 "This has been the toughest year of my life, there's no question," the 49-year-old Little Rock native said. "There's no question about that.  You're coming off a 10-win season, you have the same conference record as Florida, 7-1, the national champions, and we're talking about, 'Hmmm, you might not make it.' You know what I mean? It doesn't go together."

No one in any position of power at Arkansas says Nutt might not make it. Both chancellor John A. White and retiring athletic director Frank Broyles remain firmly behind Nutt, who is 67-44 (.604) with three SEC West titles in nine seasons.

But rather than bask in the glory of last season's 10-4 record and No. 15 ranking, Nutt has had to expend a great deal of his goodwill capital on a continuing series of controversies.

Instead of recruiting from a position of strength, Nutt has had to explain why his two best signees of a year ago, quarterback Mitch Mustain and wide receiver Damian Williams, both from nearby Springdale High, transferred to perennial national power USC. He has had to defend why their high school coach, no-huddle guru Gus Malzahn, who came with them to Arkansas as offensive coordinator, left in January to become co-offensive coordinator at Tulsa.

But the criticism didn't stop at the football field. Instead of spending the offseason building upon the Razorbacks' success, Nutt had to deny involvement with e-mails sent by a friend of his to Mustain that were critical of the quarterback's play. And he had to publicly defend his faithfulness as a husband to Diana, his wife of 24 years.

Because of a lawsuit filed against university officials regarding Nutt and the e-mails sent to Mustain by Little Rock physical therapist Teresa Prewitt, the coach's lawyer recommended that Nutt not speak with ESPN.com.

The lawyer may as well have recommended that Nutt not breathe.

Arkansas State basketball coach Dickey Nutt, the next oldest of four brothers who are college coaches (Danny is Houston's running backs coach, Dennis is an assistant basketball coach at Coastal Carolina), said of his older brother, "Ninety-nine of them think he hung the moon, one person wanted him fired; he's coming over to that person and try to convince him and talk with him."

The percentage of Arkansas fans still behind Nutt is high, if not 99-to-1 high. According to Nutt and other university officials, overflow crowds at recent Razorback Club functions from Dallas to Texarkana to El Dorado to West Memphis have been the norm. The Arkansas Democrat-Gazette reported Friday that renewals of season tickets are 15 to 20 percent ahead of last year.

"I keep telling him, 'The Razorback family will be with you through thick and thin,'" said Broyles, who will retire at year's end after 50 years as head football coach and athletic director. "I always felt that when I got picked on, the Razorback family rallied. I see them rallying right now."

White, the chancellor, all but grimaces when asked about Nutt's problems.

"Oh, I hate it. I hate it," White said in an interview in his fourth-floor office in the university administration building. "What he and his family have been put through, no one should be put through, at all. I don't care how much he's paid, he's not paid enough to have to deal with those kinds of issues."

Among those not rallying are many members of the Razorback family in Springdale, just north of campus and home of the 2005 state champion Springdale Bulldogs. The defections of Mustain, Williams and their high school coach, Malzahn, raised doubts about Nutt in his backyard, the burgeoning economic base in a state where power always radiated from Little Rock at its center.

Northwest Arkansas includes the headquarters of Wal-Mart, Tyson Foods and J.B. Hunt Transport as well as the University of Arkansas campus. The rise of Springdale High as a state power mirrored the region's increased clout. When Malzahn brought his no-huddle offense to Arkansas and Mustain signed, too, their fans thought their storybook rise would continue.

But the leap from Friday night to Saturday is always wider than it appears on signing day. The number of coaches and quarterbacks who can make that leap in their first year is at least two fewer than the people of Springdale believed.

"That's kind of my problem in this area right now. The further south I go [in the state], I'm a better coach," Nutt said.

There is no question that Nutt didn't handle the Springdale group well. He hired Malzahn to install a no-huddle offense and changed his mind one week into the season. Mustain felt betrayed not only by the offensive change but by losing his job early in the South Carolina game. Nutt may have had good reason to bench Mustain, but he failed to get the quarterback to buy into the move being the best for the team. That's a coach's job.

But it also should be pointed out that two other Springdale signees from a year ago, tight end Ben Cleveland and flanker Andrew Norman, remain Razorbacks.

Not long after the "Springdale three" left, a self-described supporter of Arkansas athletics acquired Nutt's cell phone records through a Freedom of Information Act request. Media members across the nation, including this one, received pdf files detailing Nutt's communications.

The innuendo came at no extra charge. Nutt's detractors have put him in the impossible position of proving a negative -- he must have cheated on his wife because there is no proof that he did not.

It is a maneuver borrowed from national politics, Rovian in style and execution. Karl Rove, the chief political advisor to President George W. Bush, made his career on attacking an opponent's strength. In the 2004 presidential election, the Swift Boat Veterans for Truth eviscerated Sen. John Kerry's stature as a war hero. Kerry's candidacy never recovered.

Rove had no visible affiliation with the Swift Boat Veterans, except that a tactic he made famous benefited his candidate.

Three years later, the tactic has been imported to Arkansas and used against Nutt. Among the information made public: the fact Nutt had exchanged 1,063 text messages from Nov. 30 to Jan. 11 with Donna Bragg, a local TV news anchor.

Nutt wouldn't be the first head coach whose eye for talent proved as shrewd off the field as on. The incessant demands of coaching, when accompanied by its celebrity status, have strained plenty of marriages.

But if ever there was a guy unlikely to stray, it's Houston Dale Nutt.

He is the oldest of four boys, the star of the First Family of Arkansas Sports. Nutt's father, the late Houston Sr., taught and coached at the Arkansas School for the Deaf for 31 years. Houston Sr. and his brothers barnstormed the state, playing basketball against local teams. Houston Dale, as he was known then, and his brothers and cousins would open the show with a pint-sized, Globetrotter-esque exhibition.

It was Houston Dale who made all-state as quarterback and point guard at Little Rock Central, Houston Dale who signed to fulfill his dream and play for coach Broyles. When Broyles retired as coach after Nutt's freshman year, coach Lou Holtz came to Fayetteville and installed the option. Nutt, after a year, transferred to Oklahoma State.

The other athletes in Iba Hall in Stillwater nicknamed Nutt "Daddy" because he always knew that night's curfew. He served as the designated driver before that phrase became popular. Houston would drive his new teammates to the evening's entertainment, go back to the dorm and wait for them to phone him for a ride home.

"To this day, I don't know if he has ever been to a club," said Dickey, who played basketball with Houston at Oklahoma State. "I know he has never had a drink  Houston was 'perfect.' Houston grew up with that reputation. When you attack his character, you wound him."

Which was exactly the point. They attacked his strength, and all the time Nutt has spent defending his fidelity has taken away from his time as head coach.

Broyles believes Nutt made the simple mistake of losing his last three games.

"When you lose that last game or two after great expectations, that tends to be what people remember," Broyles said. "But we lost four games against teams ranked fifth, fourth, third and first."

Those are the final coaches' poll rankings for Wisconsin, USC, LSU and Florida, respectively, and just to be clear, Nutt lost the last game or three. At any rate, he would prefer to get ready for the next play.

"This is what we were taught to do," Nutt said, referring to him and his brothers. "It's getting knocked down, and you're raised -- it's in your spirit and soul -- you get back up! It's just, you never been hit like this before. You don't mind getting hit and criticized about a philosophy or a play. But it's being hit this way that is different. But boy, you're raised -- 'It's third-and-8. Let's go.' You get back up. You go."

That's an interesting down-and-distance that Nutt chose. Third-and-8, as every armchair quarterback knows, is difficult to convert.

Ivan Maisel is a senior writer for ESPN.com. Send your questions and comments to Ivan at ivan.maisel@espn3.com. Information from ESPN.com senior writer Pat Forde was used in this story.