FAYETTEVILLE, Ark. -- Loyd Phillips won the 1966 Outland Trophy as a defensive lineman at Arkansas. He is a member of the state's and university's sports halls of fame. His brother Terry Don Phillips, a fellow former Razorback and the athletic director at Clemson, is a leading candidate to replace retiring Arkansas AD Frank Broyles. 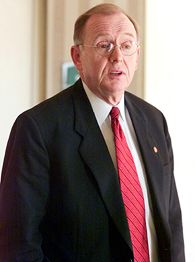 "The University of Arkansas and Frank Broyles and the whole state of Arkansas has been tremendous to me," Loyd Phillips said. "I love that institution and I could never pay it back for what it's done for me, paying for my education and allowing me to work with young people for 35 years."

Those young people included quarterback Mitch Mustain and wide receiver Damian Williams, formerly of Springdale High School, where Phillips worked as an assistant principal until last year. Now, of course, they are formerly of Arkansas, gone to USC.

All of which means the same Loyd Phillips who loves Arkansas also has seethed about losing those two players and their high school coach, former Razorbacks offensive coordinator Gus Malzahn.

"One day you go from anger to acknowledging you don't really know all the facts," Phillips said. "You listen to all the talk shows and a lot of people that call in. They don't for sure even know what they're talking about. That's why I don't know. I've had a lot of emotions, being so close to those kids and seeing everything blow up."

There is no question that the 2006-07 athletic year will be remembered at Arkansas for successes on the field. The Razorbacks reached the Southeastern Conference championship game in the three biggest men's sports: football, basketball and baseball. They lost the first two to eventual national champion Florida, and the last one to Vanderbilt, the top seed in the NCAA baseball tournament.

Not bad for a school with an athletic budget ($44 million) that is dwarfed by its SEC competitors. Florida, for example, projected to spend $68 million in its 2006-07 budget. 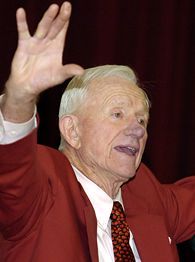 But the Razorbacks' season will be remembered for what occurred off the field as well -- the controversy surrounding football coach Houston Nutt and the departures of the Springdale three, the messy firing and replacement of men's basketball coach Stan Heath, and how the stresses of the year led Broyles to decide to retire at year's end after 50 years of service.

Football, basketball and the Arkansas athletic department as a whole are at a crossroads. The paths they take will determine the continued success of what has been an overachieving success story in the university's 15 years in the SEC.

It is not difficult to see what Broyles has accomplished in his half-century in Fayetteville. Razorback Road looks like a site for athletic model homes. Want a track and field stadium? A baseball stadium that any minor league team would die for?

Broyles has overseen the fund-raising for and construction of $230 million worth of athletic complexes, most of it as a response to the call to arms of the Southeastern Conference. Going into this season, the Razorbacks had won 30 NCAA championships and 46 SEC championships since joining the conference in 1992.

As successful as Arkansas has been, it's entirely possible that the true measure of his success won't be made until Broyles is no longer there. Alabama found that out in its futile chase of Bear Bryant's legend. Arkansas chancellor John A. White already has begun to look for a replacement. He will do so as stealthily as he can.

"I will be the search committee," White said.

The chancellor added that he solicited advice about replacing Broyles from commissioners Kevin Weiberg of the Big 12 and Jim Delany of the Big Ten, and that SEC commissioner Mike Slive will serve as his confidant. White hopes to have the replacement on campus this fall to work alongside Broyles.

"My advice would be you can't replace a legend like Frank Broyles," Evans said. "You just have to go in there and build on the foundation he's built and try to build off the things he's already done. If you try to replace him, you're going to get yourself in trouble. You need to build on the traditions, history and accomplishments he's built.

"At times, if it was necessary, you'd need to lean on someone like Frank Broyles. There aren't too many people who have done what he's done -- to be at one institution that long and to have accomplished the things he's done."

John Pelphrey doesn't have the same hurdle to leap as he attempts to replace Heath, a well-liked coach who simply didn't win enough to keep his job, and Dana Altman, who held the job overnight before deciding to return to Creighton.

"After all of this, I think our guardian angel was looking out for us, because we absolutely got the right person here," White said. "As circuitous a route as we took, John Pelphrey is already winning the hearts of folks in Razorbackland."

Pelphrey's success will hinge on two issues: how well he makes the leap from the Sun Belt Conference to the SEC, and, more immediately, how well he uses the jackpot of seven scholarships that are available to him next season.

The basketball class that will enroll in Fayetteville in the fall of 2008 will determine the success of Arkansas for years down the road. The high number of scholarships makes that a simple proposition. The future of football recruiting is less simple.

After Nutt brought in Malzahn and four of his players from the 2005 Springdale High state championship team, he silenced questions about his ability to keep the top Arkansas talent at home.

Once the Springdale three left, and Nutt had to publicly answer questions about critical e-mails sent by a family friend to Mustain, as well as defend his marital fidelity, the questions have returned.

It didn't help that four of the highest-rated recruits in the state decided in February not to stay home. Two signed at Auburn, and one each at USC and North Carolina.

ESPN.com called several high school coaches in the state to gauge what effect the last year had on Nutt and his ability to recruit.

Dennis DeBusk, an assistant at Springdale High, coached under Malzahn and remained behind when he moved to the college game.

"I don't think the opinion is very good right now, myself," said DeBusk, a coach for 35 years, who stressed that he didn't speak on behalf of Springdale High. "The coaches that I talk to and am around, and not just here at this high school. I'm talking about people that I know. They're just floored.  I referee basketball during the winter. I'd go in the gym and the first question to be asked would be, 'Well, what's going on up there?'"

At the other end of the spectrum is Bernie Cox, the longtime coach at Little Rock Central High -- so long that he coached Nutt as an all-state quarterback in the mid-1970s.

"I think it's a very, very small minority that's very persistent," Cox said. "The central Arkansas fan base hasn't given in to the negativeness of northwest Arkansas. It's more limited to that part of the state. They accomplished what they wanted to accomplish but they didn't pull in as many supporters as they hope to to make this more damaging than it is."

Jeff Williams, coach of state champion Fort Smith Southside, said the controversy had no effect on him or his players.

"I'm focused on what we're doing  You feel for the guy [Nutt] a little bit. You do feel for him," Williams said. "The guy has done a real good job up there and has been criticized a good bit. That's just part of coaching."

Lunney, whom Nutt considers a good friend, initially agreed to an interview with ESPN.com and called Nutt to alert him. Within the hour, Lunney called back to decline the interview after discussing it with his athletic director and his principal.

"I have friends on both sides," Lunney said.

It's just another indication that the offseason controversy has forced Nutt to expend some of the goodwill he banked in last season's run to the SEC West championship. Does he have enough left?

"You don't ever know," he said. "You don't know. I think the bottom line is you gotta win. You gotta win no matter what."

Arkansas will be picked to finish high again in the SEC West because of the return of Darren McFadden and tailback Felix Jones. Pat Jones, who coached a great tandem of backs in Barry Sanders and Thurman Thomas two decades ago at Oklahoma State, is a longtime family friend of Nutt.

"I went over there this spring," said Jones, who now has a radio show in Tulsa. "It was a very eerie feeling. I can't hardly describe it. As much success as they've had, it was a funny feeling."

But Jones, a Little Rock native, added, "My buddies in Little Rock aren't losing a wink of sleep because some kid transferred."

Other Arkansas fans are. As Loyd Phillips discussed his torn allegiances, he sounded caught in the middle, like a child in a divorce.

But will you use them?

"Oh, yeah," he said, a little surprised by the question.

"I think we're going to have to have a healing process in northwest Arkansas.  Like everything else, time is going to help," Phillips said. "Quite frankly, I know Coach Nutt knows this, we need to win ballgames next year and I think we will.  Winning and time -- that's the only way it's ever going to heal."